Tagore and Netaji, an unusual relationship 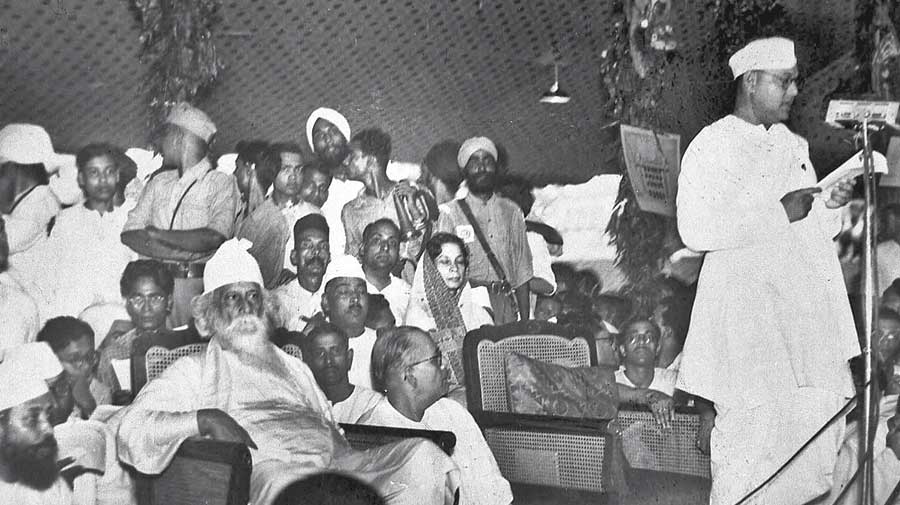 Netaji Subhas Chandra Bose and Rabindranath Tagore are Bengal’s two greatest icons. Though there were commonalities in their philosophy and politics, there were also differences. It might be fair to say that Tagore was more of an individualist while Bose was more communitarian.

While Tagore was not involved actively in the freedom struggle since he was against notions of “nationhood” to which the individual must be subservient, Bose was involved in it with vigour. Not much has been written about the unusual relationship between these two towering personalities although they interacted several times.

Right from his student days in Cuttack, Bose had been enthralled by Tagore’s poetry and used to recite them at events. His first interaction with Tagore happened in 1914 when he was a student of Presidency College, Calcutta, and visited Santiniketan with some of his fellow students.

Unfortunately, Bose’s enthusiasm was dampened when Tagore gave them advice on village development and the role of the youth in facilitating that development. Bose was probably expecting a more grandiose conversation on arts and culture since Tagore had already won the Nobel Prize. Later in life Bose recalled this meeting and held a different opinion about it.

Interestingly, many years after this interaction they did have a difference of opinion on the nature and usefulness of art in general. Bose thought art should be accessible to all, including the poorest. He felt there was an inherently elitist bias in the consummation and appreciation of art.

Tagore, while appreciating Bose’s viewpoint, had a different perspective. According to Tagore, “When art reaches its pinnacle, that is the high point of the aesthetic of the creator. It is unfair to assume that everyone will appreciate that. If the forces of appeasing every individual are mandated on the creator, then it will spell disaster.”

This difference of opinion on art is interesting given how the two are perceived in relation to their outlooks on life.

The second interaction happened a few years later, on a ship, while Tagore was returning to India from one of his US and Europe trips. Bose was returning on the same ship after resigning from the ICS programme in England to join Mahatma Gandhi’s Non-Cooperation Movement.

During that interaction, Tagore told Bose that though he was not against Gandhiji’s movement, he did not agree with a lot of what Gandhiji was attempting. He did not attest to Gandhiji’s call for boycotting the educational institutions established by the British.

Although Bose heard out Tagore’s viewpoint, he was not influenced to act accordingly. He took part in the boycott of British educational institutions and the creation of a parallel national educational system, even becoming a key figure in establishing the Kolkata Vidyapith in 1921.

Later, when Bose met Gandhiji, he was disillusioned by him. He did not think that Gandhiji had clear ideas about where he wanted to take the movement. Given that uncertainty, he was unsure how Gandhiji would achieve independence from the British.

In contrast, Bose was much more impressed after meeting Deshbandhu Chittaranjan Das and found in him the leader he was looking for. It’s well known that Tagore had many differences of opinion with Das, and this in turn affected the relationship between Tagore and Bose to an extent.

It’s also well known that Tagore was upset with Bose when in 1928 Bose was involved in celebrating Saraswati Puja at City College with an idol of the goddess. City College was a Brahmo institution where idol worship was not permitted.

When the students decided to ignore that and celebrate Saraswati Puja in a more traditional way, the college authorities fined them. Bose stood in support of the students quite strongly, which upset Tagore. In a letter to his son Rathindranath, he expressed his displeasure with Bose and wrote he had “lost all respect for Bose”.

A few years later, in 1935, Bose’s autobiographical work, The Indian Struggle, was published from London. Bose wanted the foreword to his book written by either H.G. Wells or George Bernard Shaw, and requested Tagore to write to them on his behalf.

Tagore wrote back: “Gandhiji is a tremendous moral and ethical force which, if I do not respect it, will make me ‘blind’.”

But later years witnessed a marked improvement in the Bose-Tagore relationship. In 1938, remarking about his first interaction with Tagore at Santiniketan, Bose said: “When I met him for the first time I was dampened by his advice to us on village development, but now I realise the potency of what he was trying to tell us.”

I think Tagore became more empathetic towards Bose after observing how the younger man had been treated unfairly when he expressed his desire to become Congress president a second time at Tripuri. Gandhiji was clearly orchestrating the political cards so that Bose would be denied the position. In response to such machinations Tagore had written to both Gandhiji and Nehru arguing in favour of Bose.

Ultimately, when Bose resigned from the Congress after much political drama, Tagore expressed his solidarity thus: “The dignity and forbearance which you have shown in the midst of a most aggravating situation has won my admiration and confidence in your leadership. The same perfect decorum has still to be maintained by Bengal for the sake of her own self-respect and thereby to help to turn your apparent defeat into a permanent victory.”

Immediately after this in January 1939 he hailed Bose as “Deshnayak” (hero of the nation) and wrote a remarkable essay on him.

After Bose’s mysterious disappearance from Calcutta in 1941, Tagore was greatly worried. In a telegram to Bose’s elder brother Sarat Bose he wrote: “Deeply concerned over Subhas’s disappearance. Convey mother my sympathy. Kindly keep me informed of news.”

But Tagore’s greatest tribute to Bose came in his short story Badnam, written almost at the same time as Bose’s disappearance.

The protagonist, a freedom fighter called Anil, who is crossing Afghanistan as Bose too did, remarks: “You are trying to chain me in your shackles, but do you yet have such chains?”