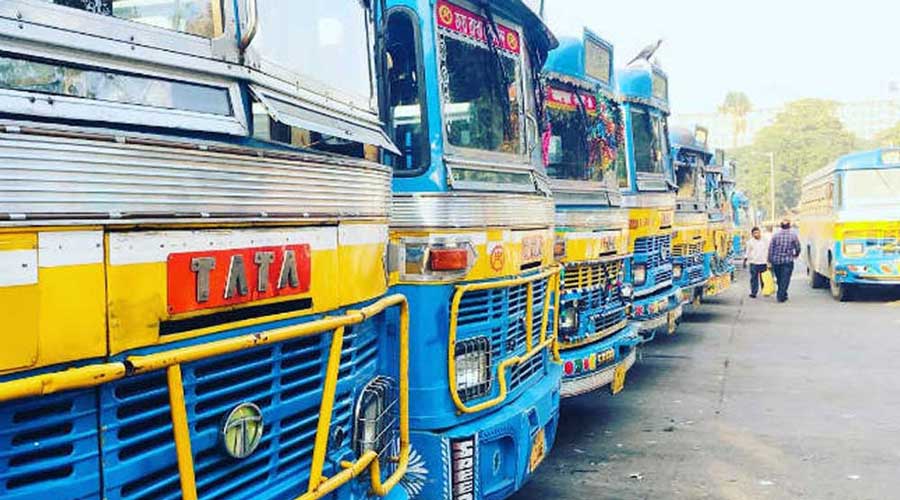 Bus and mini bus owners said the spiralling fuel price had served its worst possible blow to the industry during the pandemic.
anandabazar.com
Kinsuk Basu   |   Calcutta   |   Published 30.06.21, 01:27 AM

Private bus and minibus operators on Tuesday sought freedom to fix their fares, like auto rickshaw operators, if services resumed from July 1.

The state government has decided to partially lift the ban on public transport by allowing them to run with 50 per cent passenger capacity from July 1.

Several private bus owners said they were the worst hit during the pandemic and running buses from next month would be nearly impossible without revision of fares.

A demand, senior transport department felt, was unlikely to find support from the state government now.

Since last year, when the state government allowed relaxation of vehicles movement, around 40 per cent of the 7,500-odd private buses plying within Calcutta and its adjoining areas remained off the roads.

The fall in passenger count coupled with the rise in diesel price had pushed most to stay off the roads, bus owners said.

The remaining number stopped their operations ever since the government reimposed lockdown from May 16.

With the state government now allowing all modes of road transport to operate, bus and mini bus owners said the spiralling fuel price had served its worst possible blow to the industry during the pandemic.

Diesel sold at Rs 92.03 a litre in Calcutta on Tuesday, up by almost Rs 12 since January.

Private bus operators, who comprise bulk of the bus transportation in Calcutta, said since they did not enjoy subsidies unlike their government counterparts, it would be impossible to run buses because fuel alone accounted for nearly 60 per cent of the operational cost.

“Forget 50 per cent. It won’t be feasible to run even one per cent of the total fleet of private buses and mini buses in Calcutta,” said Pradip Narayan Bose of the West Bengal Bus and Minibus Owners’ Association. “Unless the suburban train and Metro services resume, what would be the passenger count? Not enough for even a break-even.”

Following last year’s lockdown, the state government had helped the private bus and minibus operators by waiving penalty for not renewing fitness certificates, driving license and road permits. While the move came as a relief it did little to address the woes of the private operators who said they were bleeding from losses because of the decreasing passenger footfall.

“Since the passenger count won’t go up, let the state government allow bus owners and operators to decide on their fares,” said Tapan Bandyopadhyay of the Joint Council of Bus Syndicate. “If required, let there be an amendment of the existing Motor Vehicles Act.”

Senior transport department officials said beginning July 1, the West Bengal Transport Corporation would run a certain per cent of its existing fleet strength. “We would assess the demand-supply scene for the first few days and then decide on increasing the availability of buses accordingly,” said a senior transport department official. “We hope that gradually as the demand picks up, private bus operators will resume their services.”