Many people with visual impairment received a kit containing rice, salt, soaps, milk powder and other stuff, alongside financial support as part of the drive 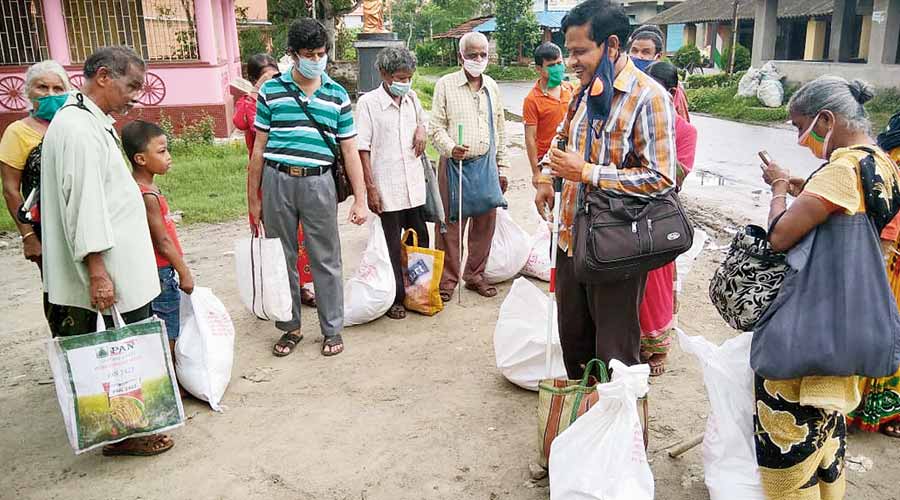 Hundreds of people with visual impairment, who did not have regular jobs but worked hard to earn money, have been devastated because of the Covid curbs.

A drive, led by a blind man, is reaching out to such people, in Calcutta and neighbouring districts.

One of the recipients is Kartick Majhi, a 36-year-old man who lives in the Briji area of Garia. For the past six years, Majhi has been selling mushrooms outside the Kavi Nazrul Metro station.

His daily earnings ranged between Rs 400 and Rs 500. But 90 per cent of his customers were Metro passengers. Along with suburban services, the Metro fleet has remained suspended since May 6. “I still come every day with mangos to sell. But there is hardly any buyer,” Majhi told Metro.

Many people like Majhi received a kit containing rice, salt, soaps, milk powder and other stuff, alongside financial support as part of the campaign.

The drive has been led by Biswajit Ghosh, the principal of Ramakrishna Mission Blind Boys’ Academy in Narendrapur.

The pandemic has put hundreds of thousands of people out of work. Among such people, the differently able have been hit the hardest.

The Society For The Welfare Of The Blind, of which Ghosh is the secretary, had provided dry ration and financial support to over 1,000 such families across eight districts of Bengal in the wake of the Covid-19 curbs last year.

This year, the work started since May, when the state government imposed a fresh set of curbs to check the second surge of the virus. Over 400 families have received aid.

“Our objective is to support people who had been trying hard to eek out a living,” said Ghosh.

Many of the recipients made, and sold, stuff like incense sticks, chanachur, beaten rice and phenyl. A few recipients who had completed higher education used to earn money as private tutors.

Biplab Chakrabarty, 32, a resident of Chakdaha in Nadia, is another recipient. Chakrabarty used to make phenyl and sell them in 500ml bottles to retailers and wholesalers. Many of his buyers live in Kalyani and Kanchrapara, both over 70km from his home. He used to take a train earlier. In the second week of June, he had hired an e-rickshaw to go to Kalyani. His margin from selling 40 bottles was around Rs 200. Hiring the vehicle cost him Rs 500.

“We were poor people. But we lived a life of dignity. But this pandemic has come nearly as a fatal blow to us,” said Chakrabarty.

This year’s journey has been “doubly difficult” because finding donors was more challenging, said Ghosh.

His friends, some of them former students of the Narendrapur Ramakrishna Mission, have spearheaded the contribution.

A senior officer in the state transport department, also a part of the society, has been helping Ghosh in the drive.

Every Saturday and Sunday, the two head out to a handful of destinations in a car, followed by a mini truck loaded with ration. “We have partnered with multiple organisations who help us in finalising the list of recipients,” said Ghosh.