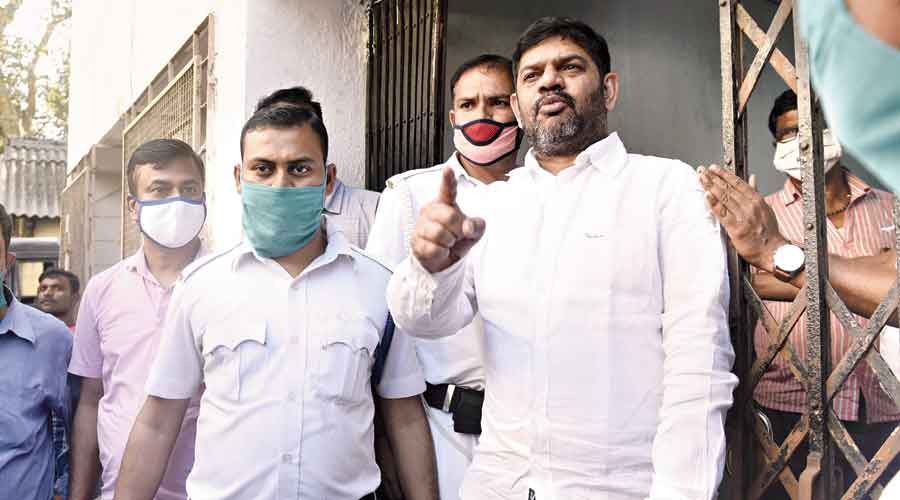 A man named Suraj Shah, who lives close to BJP leader Rakesh Singh’s Orphangunge house, has been arrested in the cocaine case for allegedly helping an associate of Singh to flee the spot where Pamela Goswami’s car was parked the day she was arrested.

A senior police officer said on Monday CCTV footage from the spot where BJP youth leader Goswami was arrested showed Shah waiting with a scooter near the leader’s car on NR Avenue, in New Alipore, minutes before the police had reached the spot. Cocaine was allegedly seized from the car.

“Rakesh Singh’s associate Amrit Singh was seen coming out of the car and fleeing on a scooter parked a few yards away,” the officer said.

Another officer said Amrit Singh had vomited on the scooter while fleeing. The two-wheeler allegedly hit a traffic cop on Diamond Harbour Road. Shah and Amrit Singh went to Rakesh Singh’s house, from where Amrit allegedly fled. He was at large till Monday.

Jitendra Singh outside the court in Alipore
Sanat Kr Sinha

Officers said that a day before Goswami was arrested, she, her friend Prabir Kumar Dey and Amrit Singh had met in Amrit Singh’s office in Minto Park and then gone to Rakesh Singh’s house in Orphangunge.

Shah — along with Rakesh Singh and Jitender Singh, who had earlier been arrested in the case - was produced in the Alipore narcotic drugs psychotropic substances act court on Monday.

The prosecution lawyer mentioned before the court about the alleged involvement of Shah and how he had allegedly helped Amrit Singh escape the spot.

The prosecution also mentioned that the police wanted to examine all the accused in the case face to face to corroborate their versions.

Rakesh Singh told media persons on his way to the court on Monday that he had been framed by a Trinamul leader and a senior police officer in Calcutta. He named the two and also alleged that Shah, who worked at his house, had been arrested so Singh could be framed in the cocaine case.

Lawyers representing Rakesh Singh submitted a prayer for his bail, which was rejected. One of the lawyers, Kailash Tamoli, alleged that the police were manipulating facts as there was no mention about the scooter or anyone fleeing the spot in the

“When New Alipore police station started the case, they did not mention anything about the scooter or Amrit Singh. But now that another wing of the police are investigating, they have come up with new facts which found no mention in the original FIR,” Tamoli alleged.

Investigators said the FIR was registered based on preliminary facts, and findings of subsequent investigations were mentioned in the case diary, which was maintained by the investigating officer.