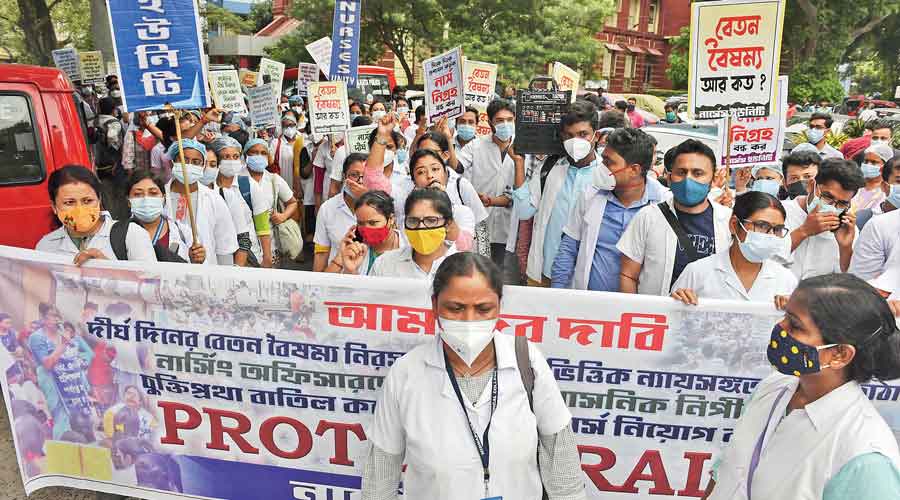 Nurses in government hospitals are set to organise a rally on Friday to demand an end to an alleged pay disparity and have threatened to cease work if police use force to stop them from joining the march.

Thousands of nurses have been taking turns in joining a sit-in at SSKM Hospital since July 26 to press for a pay parity with other state government employees with similar qualifications.

The protesters are alleging that a diploma-holder nurse gets much less than a diploma-holder engineer working in some other government department. The difference in the basic pay between the two is as much as Rs 8,000, according to the protesting nurses.

The disparity, they said., exists across all categories of nurses — fresher, experienced, diploma-holder and BSc degree-holder.

On Monday, around 3,000 nurses from various government hospitals joined a march in the SSKM Hospital compound demanding pay parity.

“No one from the government has approached us for talks yet. We will hold the rally on Friday. We hope the government will show its keenness to talk to us before that. If the government does not reach out to us by then, we will go ahead with the rally,” said Bhaswati Mukherjee, the secretary of Nurses Unity, the association that is spearheading the protests.

“We will not be responsible if the police arrest anyone or use force on us on Friday and the movement escalates into a ceasework. It will be difficult to control the emotions of so many young boys and girls who have joined the movement,” she said.

According to her, there are about 64,000 nurses working in state government hospitals in Bengal.

Mukherjee and other protesting nurses said they were participating in the protests in a way that patient services are not disrupted in any hospital. Nurses are joining the sit-in only when they are off duty, they said.

“Till now, no one has joined the protest skipping duty,” said a protesting nurse.

Friday’s rally will start at SSKM Hospital, move past Rabindra Sadan and Birla Planetarium, and pass through Elgin Road before coming back to SSKM.

Bengal’s health-care suffers from severe shortage of nurses as the number of nurses graduating from the state each year is far fewer than the demand.