Covid curbs: Night curfew is a mixed bag, some people abide and some flout 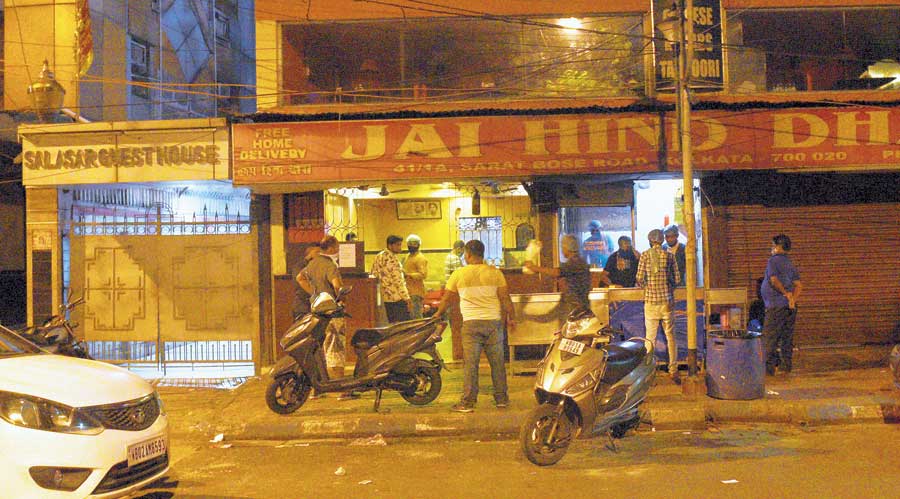 A notification, extending the Covid-19 curbs till August 15, was issued by Bengal’s chief secretary on Thursday.

“All outdoor activities including movement of people and vehicles shall be strictly prohibited between 9pm and 5am except for health services, law and order, essential commodities including agricultural produce and other emergency services,” the notice reiterated.

A tour of some of Calcutta’s busier thoroughfares on Friday night, between 11pm and 12.30am, suggested night curfew was a mixed bag in the city. In some areas, the curbs were being maintained. In some other areas, a section of people made a mockery of them.

A much-loved dhaba next to the gurdwara in Bhowanipore, popular among night birds and morning walkers alike, had its shutter partially rolled down. It left just enough space for waiters to get in and out.

The pavement in front was busy. Two men and a woman were busy taking pictures of themselves. A man and a woman sat on two plastic chairs, the former with a glass of a blue drink. There were half a dozen other persons on the pavement.

Every now and then, a waiter stepped in and came out of the eatery with one or more trays. Their destination — around a dozen cars parked on the road in front. Most of the cars had their windows rolled up. The glasses came down for a refill of food.

The dhaba is popular for its vegetarian fare but like on days before the pandemic, the hottest selling late-night item was doodh chai (milk tea). Rich and frothy, the tea came in large earthen pots, each priced Rs 30.

One large kettle served 10-12 bhaands. The lot was placed on a giant tray, which a waiter carried up to people waiting on roads or inside cars. One tray was full to empty in a few minutes before the entire process repeated itself.

All of this unfolded as a police control room (PCR) van was parked right opposite the dhaba. Two policemen chatted outside the van. 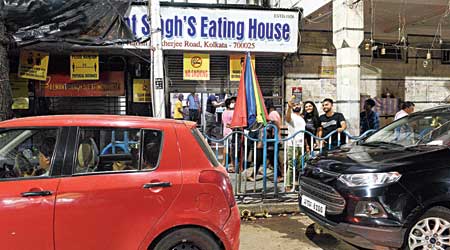 The road is dotted with several restaurants, some of them known for late-night buzz. Most of the eateries were shut. But a dhaba — which, for many Calcuttans, is the best place for north Indian food in the city and exceptionally popular with nightbirds — was open.

A usual Friday night outside the dhaba would mean scores of cars, often parked in double lines as the night progressed. The stretch would be buzzing with waiters and the air filled with the aroma of tadka, kebabs and other delicacies. Even inside, a meal would usually need a waiting time.

On Friday, the scene was nothing like. There was hardly any car parked on the road outside. One of the shutters was rolled down. But a portion of the ground floor dining section was open. A counter there was operational.

In around 20 minutes this newspaper spent outside the eatery, three people came and ordered food for takeaway. A notice was pasted on the walls outside. “Only takeaway and home delivery allowed after 8pm,” it read.

A handful of online food delivery executives also dropped by on their two-wheelers for collecting food.

According to the existing curbs, online delivery of food is allowed through the night. From 9pm, the night curfew sets in and any movement of people or vehicles is barred.

The Telegraph had reported a few days ago how two eateries on the road flouted the night-curbs rampantly by serving diners inside cars as well as inside the restaurants late into the night.

On Friday, the long queues of cars outside both eateries were not to be seen. The stretch outside both eateries was deserted. A police vehicle was parked outside one of the joints, next to the IAS officers’ quarters. As soon as a white sedan arrived at the eatery, a cop went rushing to the vehicle and spoke with the man at the wheels. Within seconds, the car left the spot.

The gates of both the restaurants were half shut and only online food delivery executives dropped by once in a while.