To be inaugurated once the lockdown is over, it promises to both calm and rejuvenate walkers 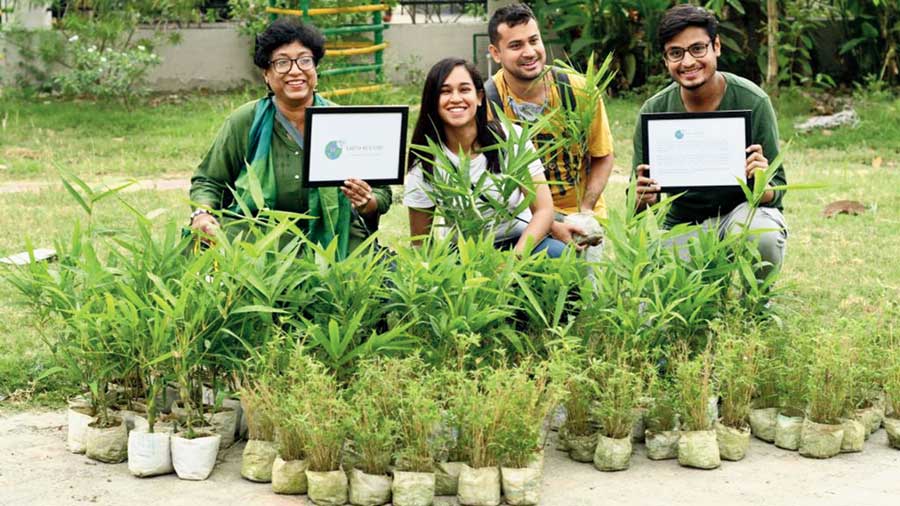 Members of Sustainable Advancements and Clan Earth at the plantation drive in the bamboo garden of BE Block, New Town
Sourced by the correspondent
Brinda Sarkar   |   Salt Lake   |   Published 11.06.21, 03:27 AM

They had the option of growing any plant they wanted but chose bamboo as it produces 30 per cent more oxygen than others. New Town’s bamboo garden officially opened just before the current lockdown and would be open to visitors once the lockdown lifts.

The project is part of the green verge adoption programme by New Town Kolkata Development Authority (NKDA) and the plot is in BE Block next to Biswa Bangla Gate on the Smart Street side. “NKDA had identified multiple plots for this project but we found this one suitable mainly because of its shape. The plot is an elongated one with a winding walkway that would allow visitors to stroll up and down,” said Nayan Mitra, founder-director of Sustainable Advancements, a company working for the environment, that will be looking after the plot for 11 months. Thereafter the agreement is renewable.

The 1.39 acre land has a walkway with solar lights on either side and the bamboos have been planted alongside. The five-odd minute walk through the garden is being called a rejuvenating “oxygen walk” since the bamboos will be providing lots of it. “Bamboo trees have a calming effect and visitors will be able to inhale fresh air and release their tensions here,” Mitra said. “Bamboo is in fact known as a golden crop due to its myriad uses. It is even a great replacement for plastic boxes, crockery, cutlery etc.”

They were helped in the project by Clan Earth, a group that makes plastic-free items and plants five trees for every sale.

Once lockdown restrictions are lifted they will put up boards and placards and NKDA chairman Debashis Sen will be invited to plant the 100th bamboo sapling.

“The inaugural ceremony had to be scaled down due to the surge in Covid cases in April. Mr Sen usually plants the first sapling at such occasions but we wanted him to plant the 100th one to show that we already had an established ecosystem of 99 plants before that. Since he could not make it back then, we are nurturing his plant elsewhere so he can plant it later on,” Mitra said.

They want to plant 100 more trees soon and the plot in fact has capacity for even more.

Bamboo saplings that were planted
Sourced by the correspondent

The plot in question used to be vacant before this and Sustainable Advancements had to clean it out and de-weed it before planting the trees.

“Buying the saplings was the cheapest part of this project, with each saplings priced between Rs 50 and 100 a piece,” explained Mitra. “What really has us paying through the nose is maintenance. Local gardeners spend an hour a week in New Town and Salt Lake homes watering 10-odd pots and take home a cool Rs 1,000 a month for it. But this is an urban forest and the scale is massive. We can’t have gardeners charging by the hour,” she explained.

They had appointed farm workers from Barasat for the project but they were initially scared of coming to town due to Covid and are having trouble commuting now due to transport restrictions. “We spoke to the residents’ association of BE Block, where the plot lies, and they have happily arranged for their caretaker to water our plants for an interim period. Plus it’s been raining off and on. Once monsoon comes, the plants will be settled in,” she says.

If it wasn’t for the pandemic, Mitra would have roped in the many colleges in the area and worked out a programme for student volunteers to come water the plants and take care of them.

• Bamboo is one of the world’s fastest-growing plants and some species can grow up to 36 inches in a day. This makes bamboo a great choice in afforestation programmes.

• The largest timber bamboo can grow over 98ft high and be thick as 12 inches in diameter.

• Not only are bamboo shoots a favourite meal of pandas but it is also an important ingredient for kitchens in many regions, including in northeast India. Many dishes are cooked inside the hollow of the bamboo too.

• Bamboo releases about 30 per cent more oxygen than other trees.

•The plant is also used for scaffolding, to build simple bridges, fences, weapons, musical instruments, furniture and handicraft. They are also used to make utensils, pens and textiles.

•The flowering of the bamboo is a curious affair. The trees flower seldom and unpredictably — some species at intervals of up to 120 years. This has widespread effects in places like some of the northeast states of India, 30 per cent of which are covered by wild bamboo forests.

Called mautam, the flowering there occurs roughly every 50 years and the resultant fruits and seeds feed rodents that multiply fast. The rats may cause plague and once they devour the seeds, they leave the forests to forage on grains stored by farmers, leading to famine. The most recent spate of flowering there was in May 2006, when the state government and Indian Army had to step in to prevent famine.