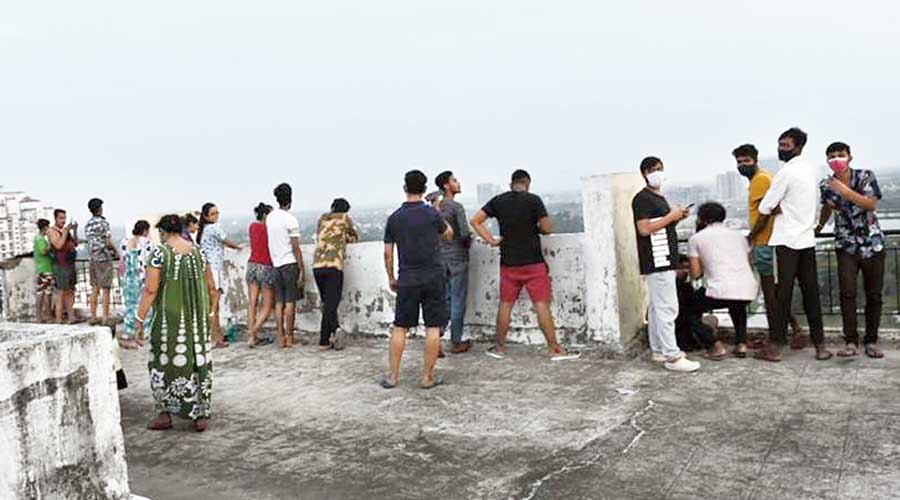 Shukhobrishti residents watch from the terrace of a building in the complex after the shootout.
File photo
Monalisa Chaudhuri   |   Calcutta   |   Published 11.06.21, 01:52 AM

The Bharat Kumar who was arrested in Punjab on Wednesday on the charge of helping gangsters Jaipal Bhullar and Jaspreet Singh flee is Sumit Kumar who rented the New Town flat where the duo stayed in hiding and was gunned down, sources said.

Police have found a purported passport and an Aadhaar card in the name of Sumit Kumar in the possession of Bharat Kumar, who was arrested in Ludhiana.

Also, a rent agreement signed between Sumit Kumar and the owner of flat 201 of Block 153 at Shukhobrishti housing complex was found in Bharat’s possession, the police said.

“We are looking into the authenticity of the identity documents. One thing is clear - Bharat Kumar and Sumit Kumar are the same person,” said an officer of the Bengal special task force, which carried out the raid that led to the death of the gangsters.

The police said they had learned that Bharat, alias Sumit, had brought Jaipal and Jaspreet to Calcutta in a car and arranged for them to stay at a hotel in New Town Action Area 1C for two nights and at a hotel on Main Arterial Road in Rajarhat for three nights before shifting them to the Shukhobrishti flat.

Kumar was staying at a hotel near City Centre 2 all this while.

During their stay in one of the hotels, Jaipal and Jaspreet had visited a hookah bar in the city, police sources said. All bars in the state are supposed to be closed because of Covid curbs.

The police said they had collected CCTV footage from the hotels where the duo had put up. “Jaipal and Jaspreet changed hotels while Kumar was looking for a flat for them to avert suspicion. Kumar contacted a property dealer named Sourav Kumar through an online portal but Sourav said he was not dealing in rented accommodations and passed on contact details of Sushanta Saha, another broker. Saha lives at Shukhobrishti,” said an officer.

Saha got Kumar connected to the owner of flat 201 of Block 153, Akbar Ali, and a rent agreement was signed between the two on May 23.

The police later learned that the SIM card that Kumar had allegedly used to contact Ali or Saha was issued in the name of Akash Paul, a resident of Rampur in Pingla in West Midnapore.

It was still not clear how Kumar obtained the SIM card.

The bodies of Jaipal and Jaspreet underwent a magisterial inquest at the RG Kar Medical College and Hospital on Thursday. Sources said four bullet heads were found in the upper part of Jaipal’s body and the rest had apparently passed through the body.

Jaspreet’s body had no bullets. “All the bullets that hit him exited the body,” an officer said.

Samples for viscera and DNA tests have been collected.

Jaipal’s father reached Calcutta on an evening flight and went to Techno City police station on Thursday night to submit documents to claim the bodies. The police said he would be taken to the RG Kar hospital morgue on Friday to identify the bodies.

Late on Thursday, the owner of the New Town flat, Akbar Ali, and his brother Sabir Ali were summoned to Techno City police station with property related documents.