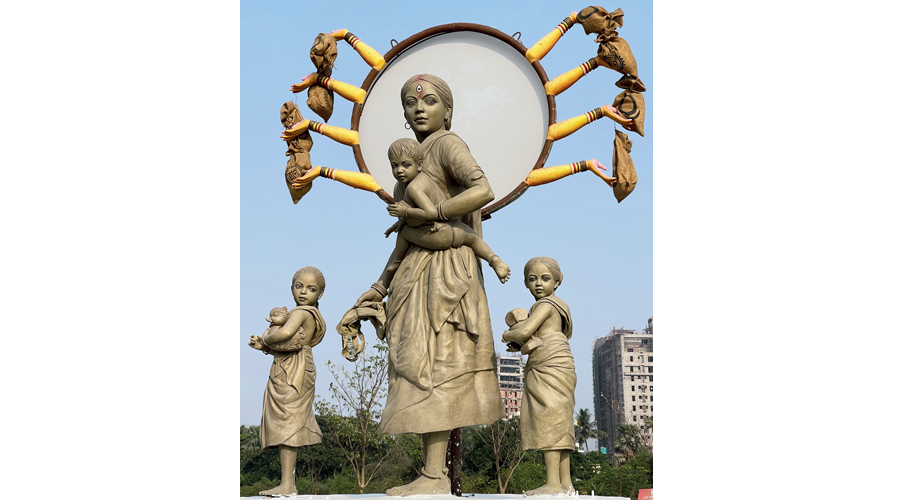 An idol at a Behala puja modelled on migrant workers who travelled for miles after the country-wide lockdown experiencing immeasurable hardships, was applauded far and wide last autumn. Now it has found space in full public view on a New Town street.

The 8ft fibre idol was worshipped at Barisha Club in 2020 and was chosen to be preserved by chief minister Mamata Banerjee who had inaugurated the puja.

The idol has been placed on an island near a pavement on the road connecting EcoSpace to Akankha More, near FinTech hub, that runs parallel to the Major Arterial Road.

“We brought it in January and it was installed in March,” said a Hidco official, adding that it would be lit up.

The decision was taken when the results of the state government’s puja contest Biswa Bangla Sharad Samman were announced. “At the virtual meet, we had requested the chief minister that the idol be placed in an open-air public place where future generations can learn about the struggle of the migrant labourers amid the Covid crisis. She suggested a few areas and asked minister Firhad Hakim to do the needful,” said Barisha Club puja president Sudip Polley, the local councillor.

Artist Rintu Das was unaware that the installation was complete. “This is my first work to be exhibited on a road,” he said.