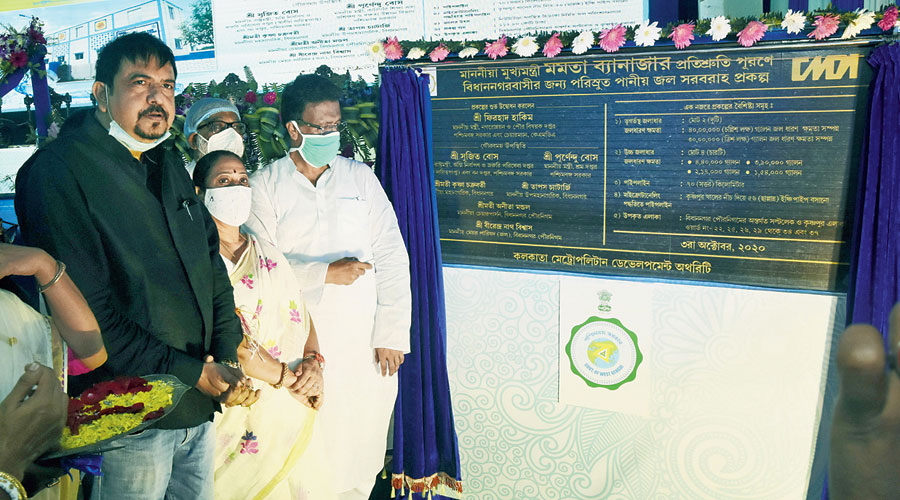 Civic officials say there will be no need to draw underground water henceforth to offset the dearth in supply of treated water. “The problem of high iron content in Salt Lake’s water supply should be a thing of the past henceforth,” a civic official said.

The corporation is currently getting four million gallons per day (MGD) from New Town, of which 3MGD is being distributed across Salt Lake. The remaining 1 MGD is being distributed in Wards 22, 25 and 26 in Baguiati and Kestopur. An interconnection will be made from the two overhead reservoirs in Ward 26 of Kestopur so that Ward 23 and 24 can also benefit from the new supply. Eventually they will get supply directly from the reservoir currently under construction behind Tank 5 in Baisakhi, for which pipelines have been laid under the Kestopur Canal.

As mentioned in a cover story in The Telegraph Salt Lake titled ‘Where our extra water will be stored’ on March 15, 2019, encroachment at the Tank 5 reservoir in AF Block had held up this project. Work on the reservoir could only be started three months ago after the encroachers were shifted at the intervention of local MLA Sujit Bose and some trees were cleared by the forest department. Construction is still under way. The encroachers have been shifted to an adjoining site, where a water tap has been promised to them.

Salt Lake’s requirement peaks in summer when 11 MGD water is needed. The current requirement of 9MGD is already being met with the new supply supplementing the water from Tallah.

The pumping station above the reservoir of 3MG capacity next to Tank 5 in AF Block.
Sudeshna Banerjee

When the second phase of work at the New Town plant gets over by this winter, another 4 MGD has been promised to the corporation. “Now they are producing 20MGD. In the second phase, production will rise by another 20MGD. Once their fifth and final phase of work gets completed, they will reach their capacity of 100 MGD. We will get a total of 20MGD water from them at that point,” said Swapan Maitra, executive engineer, PWD and PHE, of the Bidhannagar Municipal Corporation.

Though 4MGD is available, in the first week, the corporation is drawing 2MGD from New Town. “We are making sure there is no overflow at the tanks, leading to wastage. Gradually more water will be drawn,” Maitra added.

A test done on the current supply has shown satisfying results. “There is no iron, no arsenic and little turbidity. If the water pipelines are clean, it is as good as potable water,” he said.

The Corporation was drawing 2 to 2.5MGD from the underground water table through 30 submersible pumps at its 15 water tanks. “We will stop using them,” he added.