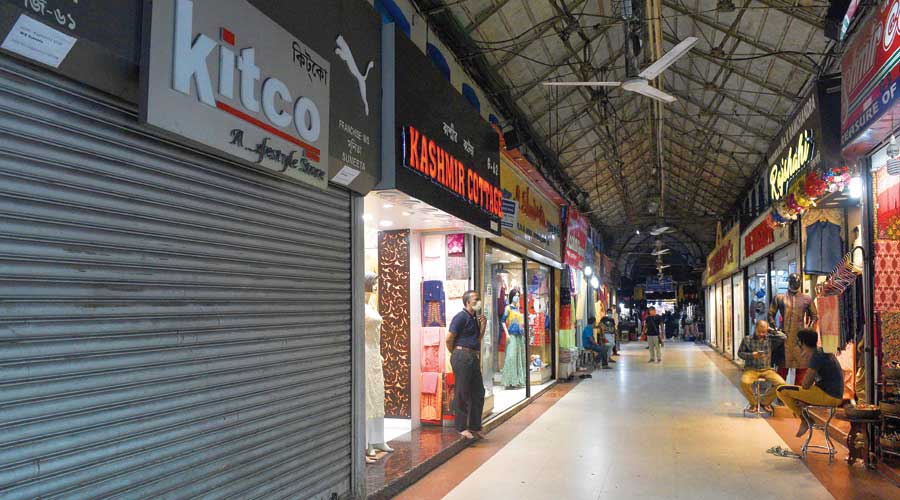 Inside his small shop in New Market, Pradip Kumar Shaw would usually find it difficult to spare time for a cup of tea around this time of the year. Customers would crowd in rows inside his shop looking for various home appliances, from mixer-grinders to air ovens, and he would be busy attending to them.

On Saturday, a day after two back-to-back lockdowns, the man in his early sixties sat on a chair outside his shop, his face covered with a mask, counting hours. Shaw was one of the few who had opened their shops.

“About one in five shopkeepers in New Market are not opening their establishments,” said Debu Bhattacharya, the secretary of the New Market Traders’ Association.

For many, keeping the shops open doesn’t make sense. All have been reeling from a sharp drop in footfall and returns since the Covid-19 pandemic struck and struggling to pay wages to their staff.

New Market has never seen such times in living memory.

“Never ever,” said Shib Shankar Nandan, who has been running their family’s watch shop at New Market, along with his grandfather, for over five decades. Some of Calcutta’s most prized watches would get repaired at their shop. Not anymore.

Ahead of festivals such as Id, Durga Puja and Christmas, these entrances and exits would hum with the cacophony of buyers turning up from across the city as well as neighbouring districts. At other times, nearly 40 per cent of the 50,000-odd daily visitors to New Market would be from Bangladesh.

All that has gone missing. Corridors are no more humming with buyers talking aloud or children screaming at the top of their voices. All the fashionable apparels the mannequins are decked out with have no takers.

“The fear (of getting infected by the coronavirus) is so deep that even those who would earlier visit the place at least once a month have not turned up even once since mid-March. There is hardly any transaction throughout the day,” said Bhattacharya, of the New Market Traders’ Association. “Owners open their shops hoping against hope. But it doesn’t work.”

Just how bad is it?

Most shops have staff engaged on weekly contracts for wages varying between Rs 1,800 and Rs 2,500 a week. Around this time, when festivals are around the corner, many shops would engage more hands to cope with the demand.

“I managed to sell just a lighter, for Rs 60, in the entire day,” said shop owner Shaw. “What will I pay my staff?”

With lanes dimly lit and frighteningly empty, most shop owners at New Market who open their shops usually end up discussing the owners who had not turned up for the day.

Some owners said they were trapped in the decades-old tradition of keeping the shutters up.

“It has never been so bad in the last four decades,” said Jagadish Halder, the manager at Nahoum’s and Sons Private Limited. Sale of cakes and other popular items have dipped drastically, casting a cloud of uncertainty on survival. “Still, we keep the shop open. It’s an age-old tradition for us.”

Others hope that the pandemic would end some day and New Market would spring back to life.

“The market is scarily quiet and there is no business,” said Tshering Yangki of Chamba Lamba, which sells silver jewellery. “We only hope that this will come to an end some day.”

“If it continues like this, many of us would find it difficult to foot the electric bills,” said Ashim Bardhan, a shop owner.

For years, most traders at New Market would usually complain about lack of adequate parking space posing a challenge to a section who enjoyed marketing in the afternoons.

Parking space is no more a problem now. There aren’t buyers who will park their cars.