With his family away in Delhi, neighbours and college alumni visit him to celebrate 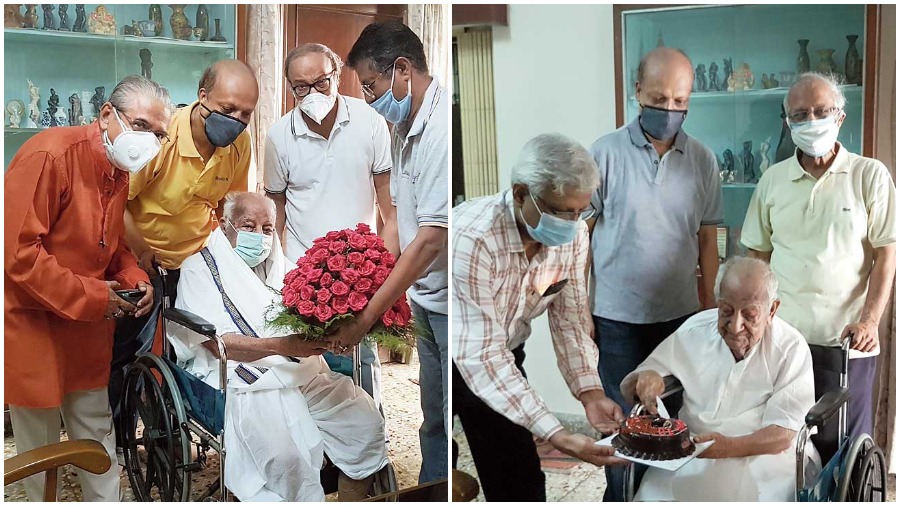 Most people receive cake, gifts and wishes on their birth “day”. But when you turn 100 the festivities continue over three days. Ask Mihir Kumar Chatterjee, centenarian of EC Block.

“Dadu’s birthday was on May 5 but he had so many well-wishers wanting to come over that I had to create time slots for them over three days. No doubt this was due to Covid restrictions but we also didn’t want him getting exhausted,” said Mita Basak, who looks after him. By noon on the second day, all three shelves in their fridge sat a cake each and one even had to be stuffed into the freezer!

Chatterjee lives alone with his domestic helps who work in shifts but no way is he lonely. On May 4, he was visited by the block’s ladies club, that, among other gifts hung up a floral board outside his home with their wishes. The next day came juniors from BE College Ex-Students Club, Bidhannagar, the institute he had graduated from in 1945. “Mihirda had asked for books by Shankar this time. We made a special request to Dey’s Publishing in College Street for some titles in the middle of lockdown,” said Saumitra Kumar Maiti, one of the alumni who dropped by at the book store.

Another alumnus was Dipankar Sarkar, whose father was a couple of years junior to Chatterjee. “They had both worked in PWD and then settled in EC Block,” Sarkar said. He also got mangoes from his garden and wife Sucharita had sent his favourite home-cooked fish.

When the alumni informed the birthday boy about a virtual Nazruljayanti they would be hosting the next day Chatterjee, from memory, recited a self-composed piece on the rebel poet for them to record and screen to others. He followed it up with some Tagore poetry and verses from The Bhagwad Gita and Sarada Ma.

When members from EC Block Residents’ Association came the next day, he reminded them to save him a slot at the upcoming Independence Day event. “I want to deliver a speech there,” he smiled.

Not just oratory, Chatterjee enjoys writing too and the latest magazine by the BE College association begins with his article.

“Till three or four years ago, dadu would walk to my house once a week. In fact, he would visit seven different neighbours on all seven days. Besides chatting, he would ask what was cooking and then tell us to pack a portion for him without mentioning a word of it to his son in Delhi!” laughed EC Block secretary Mouli Nath Maji.

His family could not come for the big day due to the pandemic but Chatterjee began his birthday with a two-hour long Zoom call with 50 members of his family from across the globe. “A neighbour Chandan Pradhan (Babai) came and set the meeting up on his laptop,” smiled Mita. 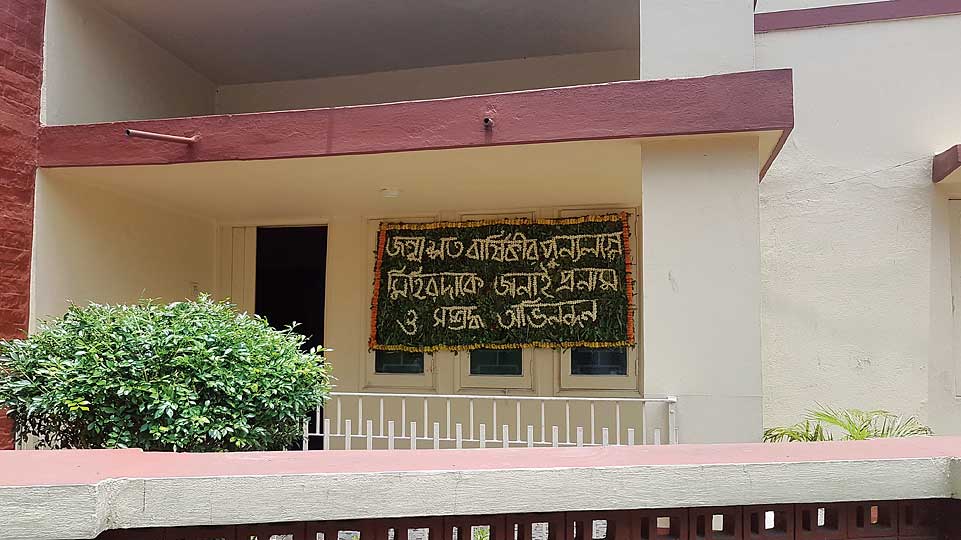 Born in Bankura in 1921, Chatterjee is an alumni of Presidency College, Bengal Engineering College and worked with PWD till 1979 as housing commissioner. Salt Lake’s Karunamoyee was, in fact, built under his supervision.

The centenarian’s memory is sharp, he suffers from nothing more than a degree of hearing loss and even walks about the house by himself. Due to the many visitors last weekend, however, he was being wheeled around.

“Simple living, high thinking,” said Chatterjee, who makes an annual donation of a lakh a year. One beneficiary is Bidahnnagar Chhatrabas Trust, that runs a home for needy college students in CK Block. Members of the trust had come to wish him too.

Last year Chatterjee had donated Rs 90,000 to the chief minister’s relief fund to fight Covid and he is articulate about the effects of the pandemic on the economy. “Many steps taking to tackle Covid have been extreme. They have caused unemployment and starvation,” says the man who does not wish to be vaccinated. “I’m a believer in God. If death is not destined, it will not happen. You are felicitating me for staying alive but it is really through deeds that we live on.”

Rudradeb Mukherjea, vice president of EC Block, read out a plaque they gifted him: “May you be with us for as long as you wish,” he smiled, adding in jest: “But from today, you are the official thakurda of EC Block!”

Do you have a message for Mihir Kumar Chatterjee? Write to The Telegraph Salt Lake, 6 Prafulla Sarkar Street, Calcutta 700001 or email to saltlake@abp.in