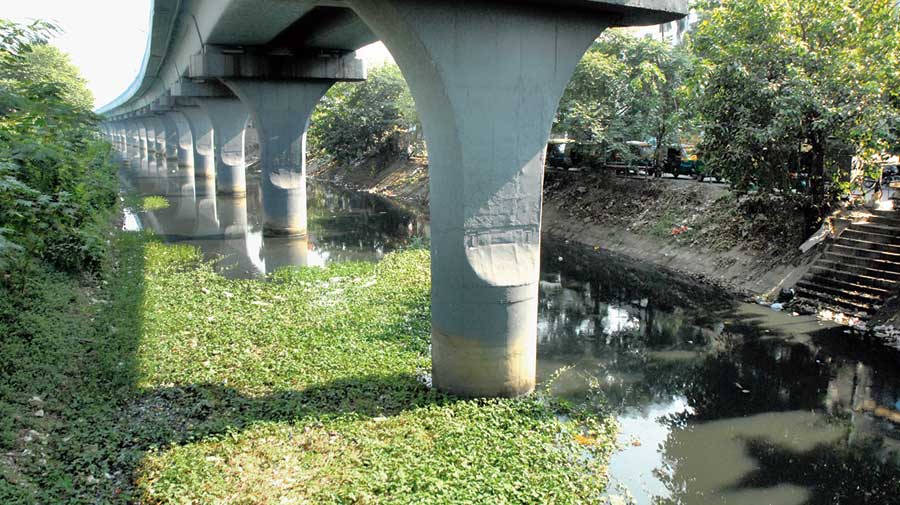 The Calcutta Municipal Corporation has to prepare an action plan to deal with waste accumulation around the Metro piers and under the elevated stations on the Adi Ganga in a month, the National Green Tribunal has said.

The plan has to be executed in another month, the tribunal has said. The tribunal issued the order on September 21 and it was uploaded on its website on Monday.

The tribunal has asked the Calcutta Municipal Corporation to clear encroachments along the Adi Ganga and to ensure those evicted are rehabilitated in six months.

Three sewage treatment plants that are in various stages of construction should be completed “expeditiously and as far as it may be practicable within December 31, 2020”.

The bench of Justice S.P. Wangdi and expert member Nagin Nanda has asked various state government departments as well as the Metro railway authorities to undertake “concerted efforts… to ensure restoration and rejuvenation of the Adi Ganga”.

Subhas Datta, the amicus curiae in the case, said the deadline to comply with the orders would be from the date when the order was signed, September 21.

The order said Datta could approach the tribunal if the orders were not complied with.

The tribunal also laid responsibility for keeping clean the stretches under the Metro stations on Metro Rail.

“Appropriate measures shall be prescribed for ensuring that solid waste does not flow underneath the elevated railway stations for which the Metro Railway stations shall be made responsible to ensure regular clearance and desiltation of the stretch within the area covered by the stations,” the tribunal has said. The Metro railway “cannot abdicate such responsibility by throwing it on the Calcutta Municipal Corporation”.

A Metro official said the authorities would go through the order and respond.

The final date to submit bids for the sewage treatment plants is October 30, a CMC official said. “It was supposed to be completed earlier, but there were too many questions from prospective bidders; a reason why the process got delayed. It is difficult to complete the STPs by the end of the year.”

In 1998, the state government had acknowledged in a report to Calcutta High Court that in the 15.5km stretch of the Adi Ganga, from Hastings (the confluence with the Hooghly) to Garia, there were 7,851 illegal structures with close to 40,000 residents, 90 temples, 69 godowns (goods storage depots), and 12 cattle sheds among others.

On April 24, 1998, the high court had ordered the removal of all encroachments within a month. Most are still in place, the government has said recently. “Such large-scale continuous encroachment could be possible because of political patronage,” Datta said.

A lawyer for the CMC said on Monday that the Calcutta Metropolitan Development Authority had already earmarked a place to rehabilitate 500-odd encroachers. The technical plan for preparation of the plants will be finalised soon according to the specification of the World Bank, which is funding Adi Ganga’s rejuvenation under the National Mission for Clean Ganga.

“Though the bench has mainly passed the order for the stretch falling within the Calcutta municipal area, it has directed the state to demarcate and clean the waterway for the entire stretch,” Datta said.