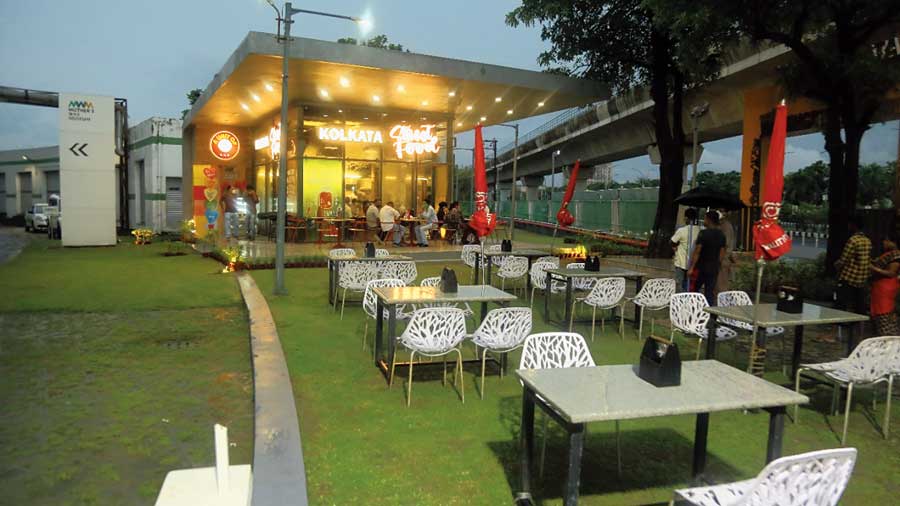 While pavements of New Town are still largely encroachment-free, this also means there is no phuchkawala or chaatwala parked at every street corner, leave alone a hot tawa sizzling with paratha being pasted over egg yolk for the quintessential kathi roll. The lack of streetfood on the streets has been addressed by an eatery right on the Major Arterial Road. And in case you missed it all these months, it has now been rechristened Kolkata Streetfood.

A cosy eatery on the grounds of the Mother’s Wax Museum complex was opened on February 2 with the name MWM Cafe. "But the spirit was missing in the name. So we are rebranding it, including streetfood in the name to highlight the character of the food being served," said NKDA chairman Debashis Sen at the relaunch of the café.

The place also has a dedicated entry now with its own signage that catches the eye from the road.

The revamped eatery, Sen said, will be what Misti Hub across the road is to connoisseurs of sweets. "Just as you get all varieties of sweets under one roof at Misti Hub, we are bringing the entire range of streetfood here," he added. Thus there are all kinds of rolls, priced Rs 42 to Rs 84, there are streetfood items with roots in other states but relished in the city, like Litti Chokha of Bihar (priced Rs 126) of Momos of Sikkim (Rs 84, vegetarian, or Rs 105, non-vegetarian). Moong Dal Chilla, a north Indian favourite (priced Rs 105) is highly recommended.

Chaats and kebabs will be on offer as well. The streetfood character of the menu is evident in the beverage section too, with Nimbu Shikanji and Masala Cola (both Rs 53) making an appearance beside Masala Tea, Lassi and canned soft drinks.