Most cinemas shut on Day 1 of reopening in Calcutta 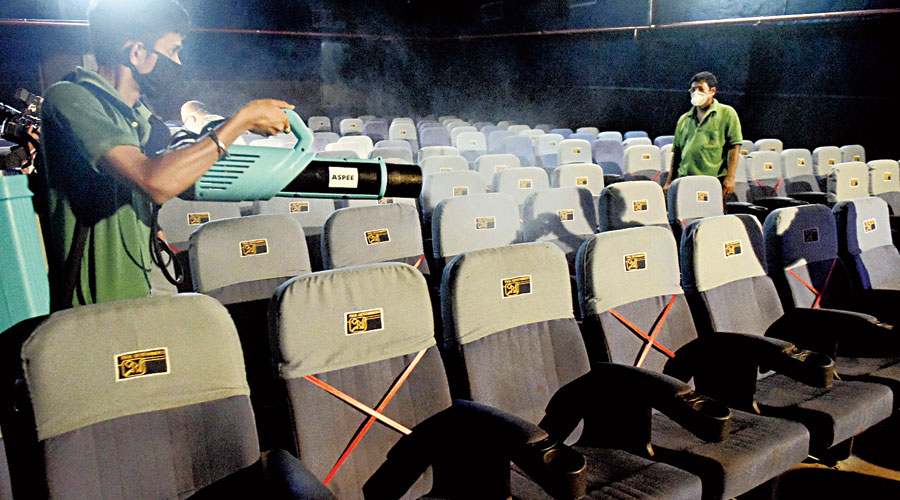 Most cinema halls in Calcutta remained shut on Thursday, the day the Union home ministry had said they could reopen from.

Inox Swabhumi and Madhyamgram were among the multiplexes that opened on Thursday with 50 per cent seating capacity. On offer was a string of re-released Hindi films. A spokesperson declined comment on the footfall.

The remaining cinema halls of the chain will open in the coming days according to operational readiness, the spokesperson said.

Some popular halls in Calcutta, like Priya and Menoka, should open doors on Friday, said sources in the Eastern India Motion Pictures association. Last-minute preparations — to ensure Covid-19 protocols are in place before opening — were underway at both halls on Thursday. Friday is the usual date of film releases.

Some more halls are likely to reopen by next weekend. A string of Bengali films — such as Koel Mallick-starrer Rawkto Rawhoshyo and Mimi Chakraborty-Anirban Bhattacharya-starrer Dracula Sir — is due for release on October 21 (Panchami).

No big-budget Hindi film is going to be released any time soon and Sushant Singh Rajput’s old films are the best bet for some exhibitors once the halls re-open. When the halls resume operations, the number of daily shows will be curtailed at many. “Apart from banking on the traditional association between the Puja and Bengali films, there is not much we can do,” said an exhibitor who owns halls in Calcutta and outside.

Hall owners are desperately waiting for the release of big-ticket Hindi films but that is not likely before Christmas.

Some of the halls which are dependent on Hindi films only — like Paradise in Esplanade — have not yet decided on the date of re-opening. “There is no point in running old films,” said Debashish Dey, in charge of operations at Paradise.