Metro Railway resumes services for all on Friday 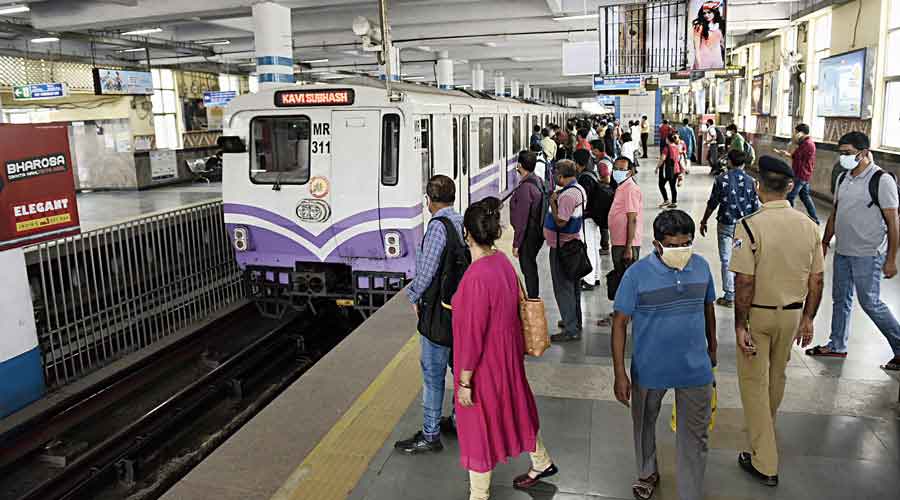 Metro Railway resumed services for all on Friday after a gap of 61 days. Officials said the footfall was high during the morning and evening rush hours.

A passenger who boarded a train at Esplanade in the evening said all seats were occupied and physical distancing could hardly be maintained because of the number of passengers.

“Most of the passengers were travelling for work. In such a situation it is difficult to control the number of people and enforce social distancing,” said an RPF officer.

The carrier ran 192 trains on Friday. The number will be 208 from Monday and trains will be available at an interval of six minutes.

“The 208 trains will run from Monday to Friday between Dakshineswar and Kavi Subhash, from 8am to 8pm,” a Metro official said.

On Saturdays, 104 maintenance special trains will run for essential staff. There will be no service on Sundays.

Before the pandemic, Metro would run 288 trains from Monday to Friday.

The number of trains had been increased gradually since the service resumed in September after remaining suspended for close to six months as a precaution against Covid. The count rose to 258 in April.

“We had increased the train count gradually and we will do so even now,” a Metro official said.

Debjani Bhattacharya, who commutes between Dum Dum and Esplanade, is looking forward to an increase in the number of trains because that will ensure safer travel.

“Commuters are cautious because of the pandemic but it is not possible to maintain physical distancing given the number of passengers. More trains are likely to lessen the commuter load on each,” she said.

Forty-eight trains will run on the East-West Metro corridor from 8am to 8pm from Monday to Friday, officials said.