Many in Calcutta left without link 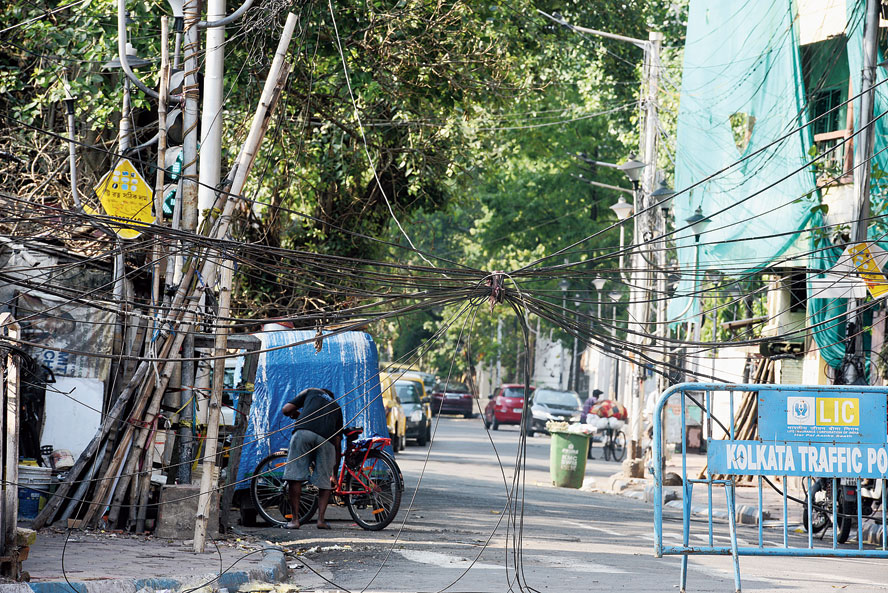 Eighteen days and counting. That’s more than half a month.

Cyclone Amphan struck on May 20 but thousands of Calcuttans are still waiting for telecom networks — wired and wireless — to stir back to life.

Cable television, broadband and wireless services could take another 15 to 20 days to normalise in Calcutta, some of the telecom firms said on Saturday in response to questions from The Telegraph.

Patients are missing medical consultations, students online classes and professionals assignments. But the call centre helplines drone politely that the connection will be restored in the “next 72 hours” and then little changes.

Added to that is lack of co-ordination. The army and other agencies chopped trees and cables together after the cyclone. The trees were pushed towards the kerb side and the thoroughfares were cleared but that spelt a virtual blackout for lakhs of Calcutta homes.

There is little hope of restoration until several kilometres of overhead cables are re-installed.

That is what a “senior executive” said on the Airtel helpline to a Dover Lane resident earlier this week. The Airtel executive told the subscriber “30,000 broadband lines are still down in the city” and could not give a date when services would be restored.

A Ballygunge resident complained that he had received several alerts about bills over the phone but not a single message from the telecom company on the delay or the reasons for the delay. “Why should we continue to pay if the services are not up to the mark?” he asked.

Before the cyclone, the service providers were too keen to list before the media the precautions they were taking and how they were stocking up on essential supplies, equipment and spares.

Now, officials, who overnight would not speak on record, blamed the absence of exactly those equipment and spares for the delay, among other reasons.

The initial response of some of the operators in the early days after the cyclone was to join “live” cables and restore the service. But service engineers explained that where fibres were severely damaged, the patch-up would affect quality.

As power supply was gradually restored, and subscribers switched on their television and routers, the problem became apparent.

“Our broadband customers have been experiencing intermittent connectivity because of the deep damage to infrastructure. The services have reached almost near-normal and we are hopeful of full restoration shortly,” an Airtel official said without specifying any timeline and on the condition that he would not be named.

“There was a shortage of cable as the market was closed because of the lockdown. Shops and godowns were closed and cable and equipment were inaccessible despite being in stock. This has caused the delay but the administration helped towards opening many of the stores so that equipment can be sourced,” said Chandranath Pyne of the Kolkata Welfare Association of Broadband and Cable TV Operators.

Replacing cables has also emerged as a financial burden and several operators are looking to “manage costs”, which is hampering restoration of service.

It is estimated that the overhead cable cost, including installation charges, is around Rs 20-22 per metre, depending on the quality of the cable. “These are our own expenses and we don’t get any support from banks and financial institutions,” said Pyne, adding that cash management had become a challenge post-cyclone.

“We have never seen such damage. Thousands of trees have fallen, causing major fibre cuts. In some places, it is taking days to remove the trees. But work is going on round the clock,” added Pyne.

Bijoy Agarwal, director of GTPL-KCBL, a cable service and broadband provider, said: “We are expecting that by the end of the month, services will come back to normal. But in districts, it will take longer.”

According to a telecom industry observer, while all the network providers were affected, Jio, being a later entrant and having heavily invested in beefing up its network with diesel generators stationed at most network sites, remained relatively unscathed. “We have seen a rise in subscriber enquiries on new connections and portability,” a Jio official said.