No exams in September, says Mamata 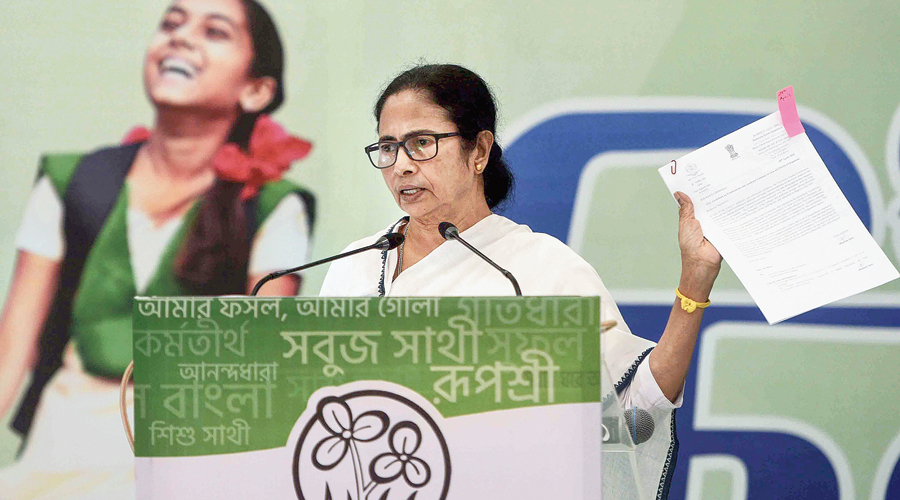 Chief minister Mamata Banerjee on Friday announced that Bengal would not have college and university examinations in September.

While delivering a virtual address, Mamata asked education minister Partha Chatterjee, who was seated next to her, to inform students by next week how they could be evaluated before Puja. The chief minister’s comment came hours after the Supreme Court upheld the University Grants Commission’s decision to assess students through offline or online exams or a blend of the two.

About 7.5 lakh final-year undergraduate and postgraduate students in Bengal will have to take their exams because of the UGC’s directive on July 6, which has set September 30 as the deadline for the tests.

At least six universities in Bengal had distributed results to their students in July based on internal assessments and results of previous semesters.

An official of the education department said the assessment was done based on a UGC directive in April that left it to the respective state governments to decide on the mode of assessment.

In her address on the occasion of the foundation day of her party’s students’ wing, Mamata said: “I can tell you this much that examinations will not be held in September. That question does not  arise. If the examinations are to be held, I will urge the education minister to look into the possibility of holding the exams before Puja, through online or offline mode, so that the students are not inconvenienced.”

The UGC notification on July 6 said the examinations would have to be held by September 30.

Mamata said: “I will urge minister Chatterjee to explore whether those enjoying the facilities can write the test online from home and those without the facilities can write the test offline from a place close to his or her home without requiring to travel far. Just do what is bare minimum. We need not go for the maximum. You consult with the colleges and the universities and follow the rules and inform the students about what you have decided by next week.”

IIT Kharagpur had assessed students in the spring (end) semester on the basis of grades of mid-semester exams, assignments, class tests and viva voce and cancelled the end semester exams because of Covid-19. The results were announced in early July.

The chief minister suggested that her government could invoke the Disaster Management Act to hold the exams after September 30, a provision that was mentioned in the apex court’s judgment.

“In the guidelines that have been given today about UGC, it has been stated that the examinations can be held later following the Disaster Management Act. The state government can decide on that. So we could hold the tests after 15 days or after 30 days. But apparently we have to hold the examinations,” she said.

An official of the higher education department said the chief minister, while suggesting that her government could invoke the Disaster Management Act, was referring to what the court had said on the final page of the judgment.

“The order says that if any state or Union Territory in exercise of the jurisdiction of the Disaster Management Act, 2005, has taken a decision that it is not possible to conduct the final year/terminal exams by September 30, they are at liberty to make an application to the UGC for extending the deadline for them,” the official said.

“The appeal shall be considered by UGC and rescheduled dates be communicated at the earliest.”