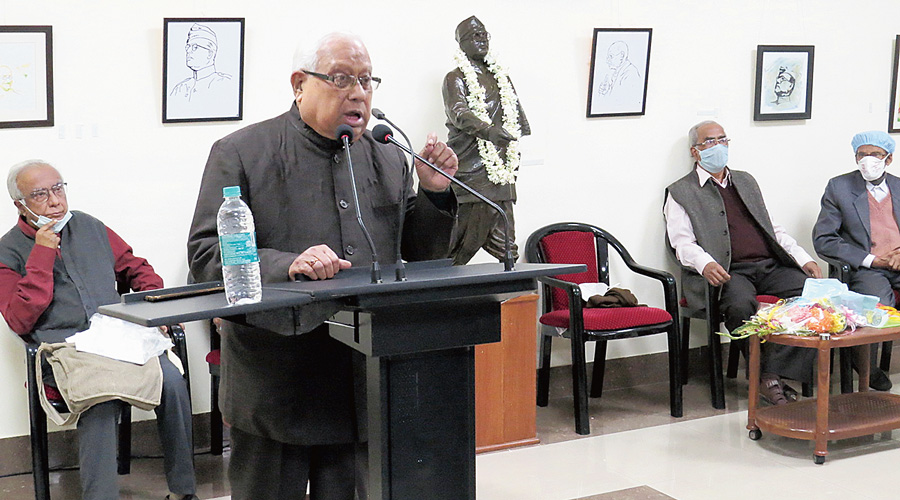 Mahatma Gandhi’s political death took place months before he was felled by the assassin’s bullet. That is why the day the country was partitioned, on August 14, 1947, he was sitting on a fast alone in Beleghata.

The Asiatic Society had organised a lecture on ‘Mahatma Gandhi and Netaji Subhas Chandra Bose: The Mutual Discourse’ and Professor Amal Mukhopadhyay, a former principal of the erstwhile Presidency College and a political scientist, was delivering it on Gandhi’s death anniversary and a week into Bose’s 125th birth anniversary year.
Mukhopadhyay described Bose as the greatest patriot who sacrificed everything for the motherland and Gandhi as the greatest tactician whose ways have been followed by many leaders the world over.
“Their paths were different from the start. Gandhi went to South Africa to fight a case and launched ahimsa satyagraha against racism, not the British government. He got the Kaisar-i-Hind medal for helping the British in the Boer War. His first two movements on his return, Champaran and  Ahmedabad mill strikes, were both social movements, not political.”

Mahatma Gandhi's statue created by Gautam Pal with quotes by both in the backdrop.
Sudeshna Banerjee

It was the Jallianwalabagh massacre in 1919 that aroused Gandhi’s nationalist consciousness and he returned the medal. And during the Khilafat Movement the same year, he became immersed in politics. Bose studied Swami Vivekananda in his adolescence, resolving to take sanyas in the monk’s footsteps. “During the first year of IA, in course of his travels, he met Swami Brahmananda in Varanasi and sought diksha. But he was told that renunciation was not for him.”

Mukhopadhyay said he had researched the assault of the racist teacher, E.F. Oaten, that took place at Presidency College on 16 February, 1916. “I wanted to revoke the expulsion order that was passed on Bose (and another student Ananda Mohan Dam) by the erstwhile principal Henry Rosher James. Oaten could not identify his assaulters. The order was issued on the basis of a bearer’s word who identified the two from among suspects through a hole from a hiding place. My argument before the governing body was they were given no scope for self-defence. The order was revoked on January 22, 1996,” he said amid applause.

Mukhopadhyay pointed out that after Bose gave up ICS, it was Gandhi that he first went to. “Gandhiji sent him to C.R. Das who embraced him. Later, when Gandhiji got the resolution of the withdrawal of satyagraha passed by the Congress working committee after the Chauri Chaura incident (when police shot and killed participants in a non-cooperation movement and a police station was burnt in protest, killing 22 cops), two people opposed it — Jawaharlal Nehru and Bose, both being of socialist mindset. Being a supreme tactician, Gandhi made Nehru the Congress president in 1929, creating a rift with Bose,” he said.
Mukhopadhyay disagreed with a dialogue attributed to Gandhi in the film Gumnami where he calls Bose his son. “Gandhi was 36 years older to Bose. But he never saw him as a son.”

At the Tripuri session of the Congress in 1939, Bose was elected president, defeating Pattabhi Sitaramayya. “Gandhiji could have remained neutral but he openly said: ‘(Sitaramayya’s) … defeat is more mine than his,’ and with a working committee filled with Gandhi loyalists like Rajendra Prasad and Vallabhbhai Patel, Bose realised he could not work.”

When Netaji was expelled from Congress, one person protested — Rabindranath Tagore. “He wrote him a long letter, referring to him as deshnayak. The two were so close that Tagore attended the foundation stone laying of Mahajati Sadan in 1939 despite being ill.”
Despite his differences with Gandhi, Mukhopadhyay pointed out, when Bose made his radio address years later from Rangoon, it was he who referred to Gandhiji as ‘father of our nation’. Gandhi too called him “patriot of patriots”.

When Lord Mountbatten came to India, he resolved to meet all the leaders, starting with Gandhi. “When Mountbatten asked what the solution to India’s problem was, his response was that Jinnah should be asked to form the government. When he shared this with Nehru and Patel, this created a rift between Gandhi and his followers. The working committee went on to pass the resolution of Partition, despite Gandhiji being strongly against it. His own followers had sidelined Gandhi.”
Netaji’s role in expediting India’s freedom has not highlighted enough. “When Prime Minister Clement Attlee was asked why India was being granted freedom, he had responded that it was because of the mutiny in the Royal Indian Navy which was a fall-out of the INA trials at Red Fort, which also made lakhs take the streets. People of the country had risen,” said Mukhopadhyay.

He ended by lamenting about the lack of patriotism in today’s leaders who “know only vote-bank politics”.
Satyabrata Chakrabarti, the general secretary of The Asiatic Society, said the objective of organising the lecture was to show how despite their differences Netaji and Gandhiji remained respectful towards each other, a trait missing in today’s politicians.

Earlier, an exhibition, in collaboration with Rekha Chitram, was inaugurated by former principal of the Government College of Art and Craft Isha Mahammad, also a former president of Asiatic Society. The exhibition showcases 30 artworks, including eight sculptures in bronze and fibre on Gandhi and Bose. The exhibition will be on till February 8, and visitors will get to see Gandhiji’s half-bust statue by Kartik Chandra Pal, who had the opportunity to take his measurements during a Barrackpore visit, while his son Gautam, a CL Block resident, has sculpted a statue on his Dandi march. Family link is also present in the thread on canvas displays, by Rekha Chitram founder Rekha Chakraborty and her son Arun, the current head of the CK Block art school.