Theme announced at a webinar on Saturday, attended by puja committees of England, Wales, Ireland and Calcutta 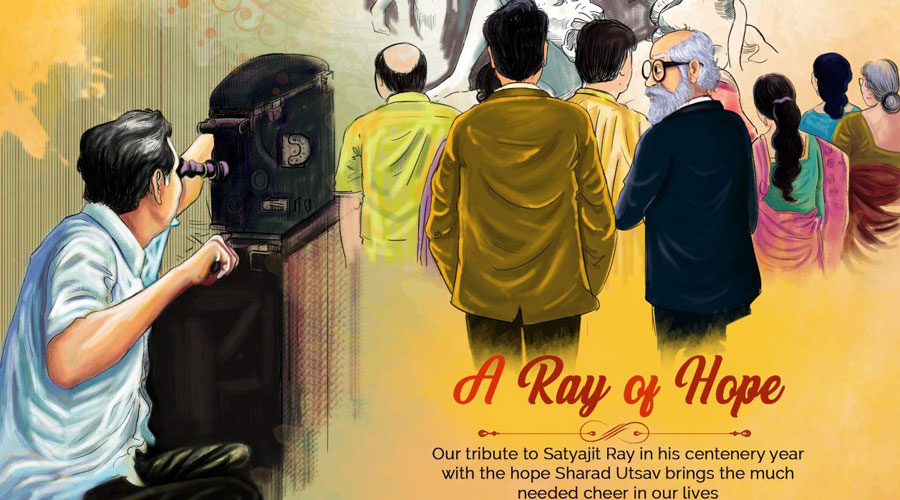 The pandemic is bringing Satyajit Ray and Durga puja together on British soil. London Sharad Utsav (LSU), one of the biggest pujas of England, has announced the theme for their 11th edition -– A Ray of Hope.

“In the current backdrop, the Puja will act as a harbinger of hope. This being the centenary year of Satyajit Ray, we also plan to start our year-long celebrations during the Puja,” LSU vice-president Suranjan Som told The Telegraph.

The theme was announced at a webinar on Saturday, attended by puja committees of England, Wales, Ireland and Calcutta.

Bidisha Datta, who represented LSU at the webinar, said: “Our venue, Ealing Town Hall, will be adorned with Ray film posters. Instead of holding cultural programmes, we plan to screen his films. Our children are not so familiar with Ray’s works. We have a large hall, so social distancing can be maintained. A quiz and a panel discussion are also being discussed.”

All programmes will have an online version, keeping in mind those who cannot make it to the venue because of safety concerns. Partnerships with other agencies are also being worked out to escalate the Ray celebration.

“We will go by government guidelines relevant at the time. If attendance gets restricted, we will adapt accordingly,” said Som.

The Puja poster, with illustrations of Ray behind the camera and some of his characters in front of the idol, was also released at the webinar.