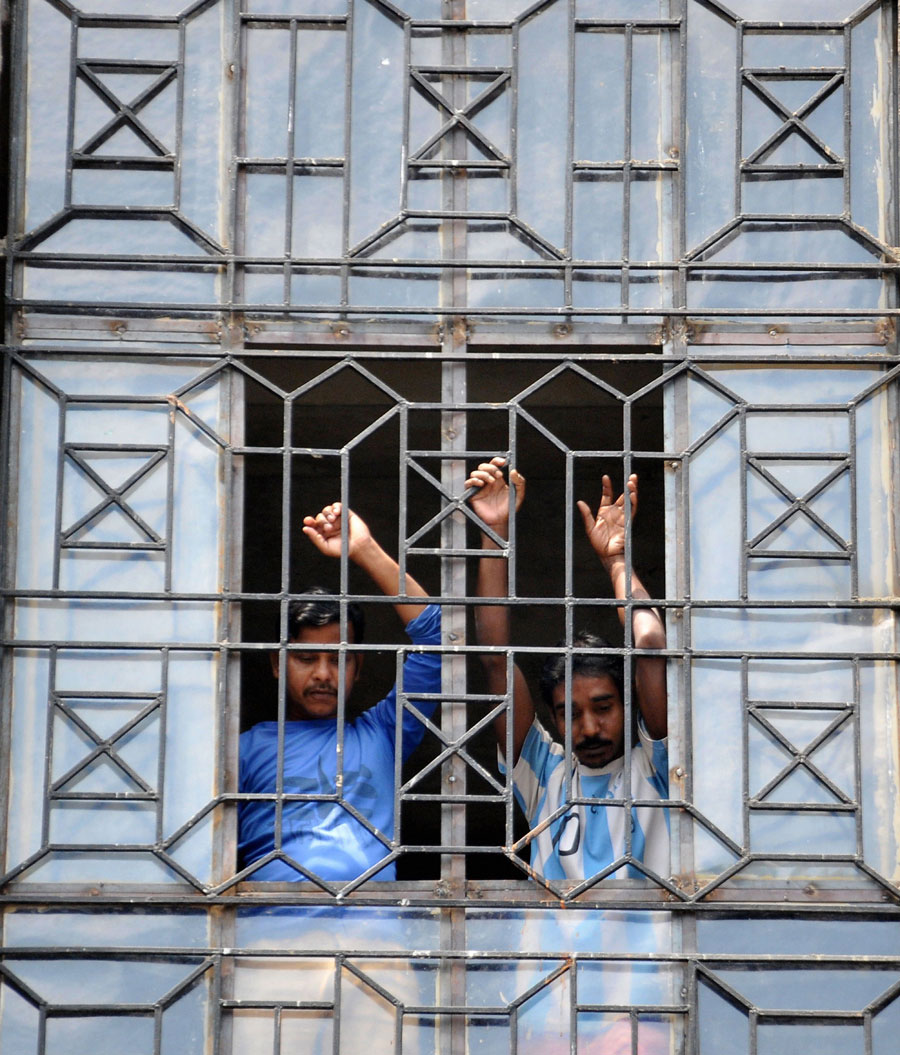 Homeless people look through a window at a shelter, during a nationwide lockdown in the wake of coronavirus pandemic, in Calcutta on Saturday, April 4
(PTI)
Our Special Correspondent   |   Calcutta   |   Published 04.04.20, 08:06 PM

The number of vehicles on the roads and lockdown violators came down on Saturday compared with Friday.

Police said 706 people were prosecuted for lockdown violation till 8pm on Saturday and 117 vehicles seized. The corresponding figures on Friday were 800 and 148, respectively.

Police officers said they were flooded with requests to travel to other districts or commute within the city citing one excuse or another.

“People are approaching police stations, dialling 100 or requesting over the phone to allow them to commute. All of them are claiming to be having some kind of emergency,” said an officer at Lalbazar.

Some callers said they were stranded in the city for around two weeks and wanted to reunite with their families in districts. Some requested that they be allowed to meet their elderly parents, who live separately. A few wanted passes for their help so they could commute daily without being questioned by cops.

“We are relying on documents and asking people to produce proof that they are in a crisis,” a senior officer said.

Officers of a central Calcutta police station received a request on Friday from a woman seeking permission to travel to Hooghly. “She could not produce any document in support of her claim that she had an emergency. So, we had to reject her request,” said an officer of the police station.

“We are trying to make people understand that social visits can wait. One can be allowed to step out only if there is a medical emergency or a question of life and death,” the officer added.

Officers The Telegraph spoke to said the vehicle count on the roads had come down considerably.

Most of the four-wheelers and two-wheelers spotted on the roads were stopped and questioned.

Officers said a bigger challenge was to contain people walking on the roads.

“People are visiting sweet shops. Some are stopping by to gossip, while others are just roaming around,” an officer posted in north Calcutta said.

The police are trying to convince such people to stay indoors and, if needed, are prosecuting a few to set an example in the locality.