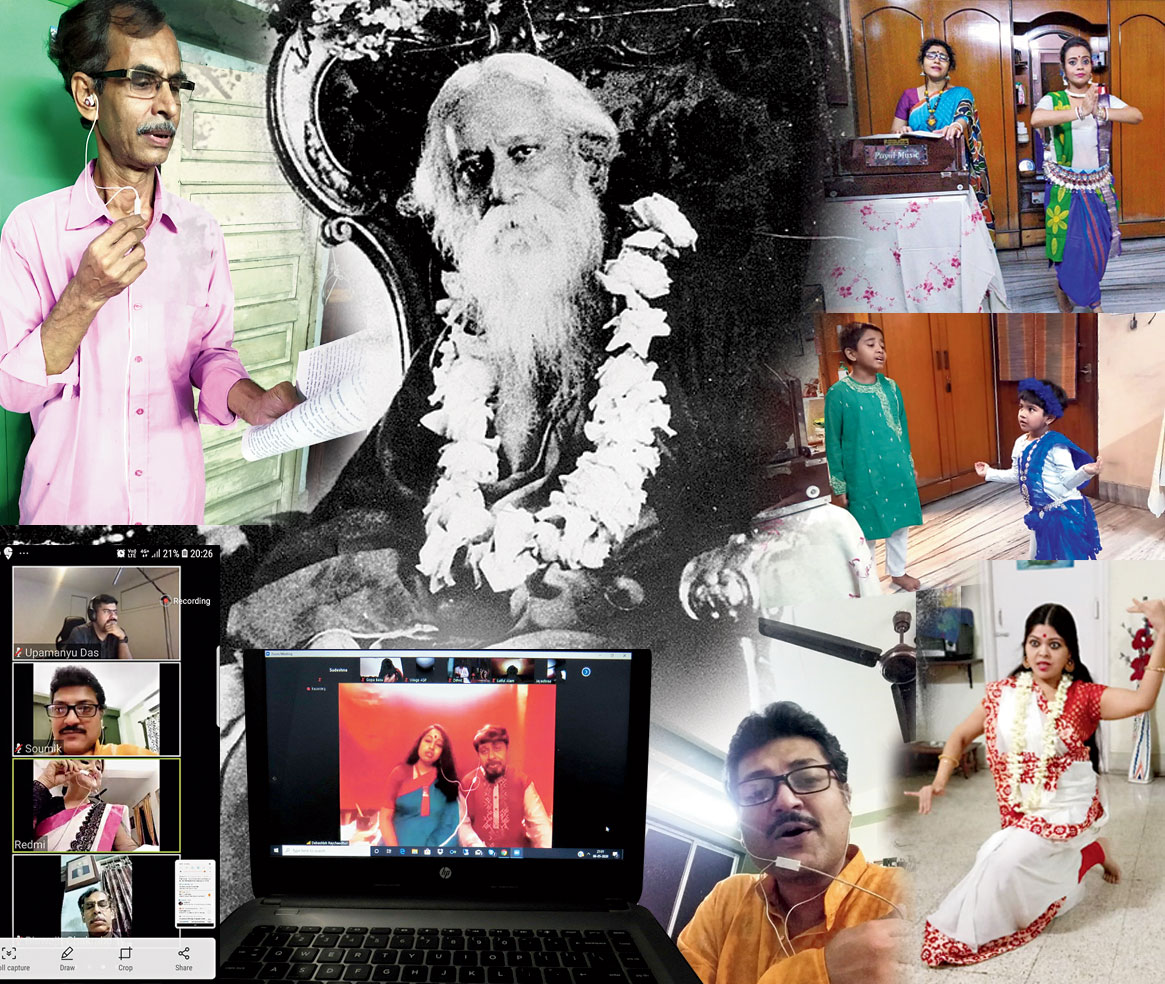 The pain of having to perform in isolation was apparent in the voices of guest artistes Debashish and Rohini Raychaudhuri, who are regulars on the township’s Rabindra Jayanti stages. “We cannot see you. Like you, we are not venturing outdoors,” they said, before singing Anandadhara bohichhe bhubone and Bipul torongo re.

The video conference was a novel experience for many of the participants. Anchor Gopa Basu kept her cool as she shepherded her list of artistes, who were visible only on her computer screen. “Taraknath Giri achhen? Nei? Tahole Kanta Dutta Roy prostut thakun er por,” she said, trying to spot the desired faces from the gallery on screen.

She even had to keep artiste requests in mind. “Milu Mitra has to take some medicines at a fixed time. So we need to let her off early,” she announced, introducing the elderly lady who could not be spotted. “We can see only your ceiling,” Basu told her as the lady kept asking if she was visible, and even offered to start without proper video feed in desperation at one point. Finally when the matter was sorted and she started to sing, she faced interruptions twice, in the form of voices in the online audience. “Please mute them,” she pleaded. Her third attempt “to give a message of peace in a turbulent time” was fruitful, resulting in a fine rendition of Santi koro borishon.

Amrita Dutta was singing Oje mane na mana when the link snapped. “Amrita ke dekhao jachchhe na, sonao jachchhe na.” Debajyoti Dey, who was providing technical back-up, faced a tough time. “So many participants have already joined the programme. I cannot get them out of the meeting and start afresh,” he conceded.

Madhurima Pal, however, was adept. Setting the camera up at a favourable angle, she danced with abandon to Mon mor megher sangi in her drawing room.

In some houses, there was excitement in the whole family about the programme. Jayashree Pramanik came on view with her mother Nilima Sen and together sang Jodi prem dile na prane. She even requested that her daughter be given a chance. The little one, in her mother’s lap, could not be made to face the camera but was persuaded to sing a stanza of Hey sokha momo hridoye roho.

The programme lasted for over three hours. “Under normal circumstances, many blocks would have performed separately. Since they could not, we decided to take this online. It caused great excitement. Though a few of the performers failed to log in and we could not go live on Facebook as planned, it was a success,” said Dipak Biswas, the forum’s cultural committee convenor.

The video conference was hosted by Sukumar Chakraborty, co-founder of the six-year-old theatre group, and members logged in excitedly. “Being an IT person, I’m on Zoom (the app that was used) all the time these days,” he said.

“Load shedding!” said a confused Soumik. Luckily the lights returned fast and he turned on the karaoke music from his computer and sang Amar poran jaha chay mellifluously. While he took a break, Biswajit Chakraborty recited but was shocked to learn that his video had been off all the while!

Another hiccup was when EC Block couple Ananya Ghosh and Jaideep Gupta’s reading of an excerpt of Shesher Kabita could not be heard. “We anticipated network problems so had recorded the piece the night before. We mailed it to Sukumarda but it wasn’t playing on his computer either,” said Ananya.

Upamanyu Das, another member, then volunteered to help. “Mail it to me, let me try to play it,” said the member who is pursuing a wildlife photography course in New Zealand. The mail was sent while still on air and played loud and clear for the others. Upamanyu has a studio set up at home and sang there, even if it meant staying up till 4am local time.

The lone dance performance was by Sonali Basak, who partnered Aruni Majumdar in reciting an excerpt of Rakta Karabi. The group is planning an online show of their next audio play. “I’ve just completed the script,” says Sukumar, “It’s on the lockdown.”

The script wasn’t original but everyone enjoyed it all the same. “The organisers of the show were insisting that I take part but I wasn’t prepared. Then I received a WhatsApp forward this morning that linked Rabindrajayanti with the lockdown. I decided to recite it,” said the resident of New Town’s CD Block.

The show saw a host of other performances too. Sudipto Mojumder sang Jhoro jhoro borishe bari, Sonchaita Shnatra sang Phule phule as well as Ye Banks and Braes, the Scottish original that inspired it while Mrinalini Chatterjee sang Jodi tor dak shune while strumming her guitar.

Shruti Chinya danced to Madhuro madhuro dhwani but was upstaged by slow internet connection. “I had started dancing but had to stop midway as the net connection got disrupted. I decided not to start over as there was a long queue after me,” said the lady.

The event was hosted by Dipika Ghatak, whose mother Sithi Kana Ghatak is the block’s cultural convenor. Both mother and daughter recited while Sithi also sang Mone robe kina robe. “It’s been weeks since we met. Even if not physically, at least we got to see and hear one another through this event,” said Sithi.

The show concluded with an open-to-all chorus of Akash bhora, led by Patralekha Mukherjee.

“Imagine what pauses would do to fast tracks like Pran chay chokkhu na chay,” he said. Nonetheless his students carried on. Faizan Ahmed of Class V played Purano sei diner katha while K. Sradha played Anandoloke mangalaloke, both on the guitar.

The school, that teaches several disciplines, was hosting each department’s celebration on different days. The dancers were not without their share of technical glitches. Saheli Chowdhuri had to stop dancing to Phagun haway haway as no one could see her. The schedule was rejigged and she was given a later slot when she could finally perform. “Most of us are using this online platform for the first time so there were bound to be glitches. Still it was quite a feat pulling it off without any rehearsals with our teachers,” said Saheli, a businesswoman. “I was most excited at being able to apply lipstick after almost two months!”

Piyali Sur sang to Hey nutan, Aarohi Sengupta to Pran bhoriye trisha horiye (on her second try thanks to slow internet speed) and Debanjana Dutta, a special child with Sturge-Weber syndrome, sang as her grandmother played the harmonium.

Dalina Sarkar enjoyed dancing to Janani tomar so much that she equated it with a trip to Digha! “That’s what dancing felt like after a month’s lockdown,” she laughed.

“I asked students to pray that next time we can perform on stage,” said Manimala Upadhyay, a kathak teacher and host of the session. “We are holding Zoom classes since April so we decided to hold Rabindrajayanti here too.” Principal Sagarika Mitra said response had been excellent despite the challenges.

Again, when Jhupan Das sang Hriday amar nachilo, sister Ishani Das danced along. Ishani’s husband Prabhudan Biswas narrated a script before the show. Earlier Jhupan’s son Samvit Ukil, 7, sang Pagla hawa while Ishani’s daughter Sampurna Biswas, 4, danced along. “This show came at the right time. The kids were getting bored and restless at not being able to go out to play,” said Ishani.

Priyanka Niyogi’s father Dhurjati Sarkar recited Krishnakali ami tarei bole too. “My father, 70, loves poetry and has been penning poems on the lockdown. He was so happy to have found a platform to recite,” said Niyogi, who presented the inaugural dance Mor beena uthe. “Even though we are physically constrained, activities like poetry and dance can keep us fresh,” said the lady who is also imparting dance lessons online.

Taking part were also members like Lakshmimani Sen who is stuck in Bangalore with her son due to the lockdown and Indrani Basak, who is in Gurgaon with her daughter. Both read out passages from and on Tagore.

Finally Sonali Basak conveyed the vote of thanks in an innovative way, weaving in Rabindrasangeet like Amra chanchal, Amar bela je jaye and Sajani sajani. “We Gulabi Gang members are a fun-loving lot,” said Basak.