Through the stained glass, vividly

Katayun Saklat , 82, is a charming and exuberant painter and stained glass artist 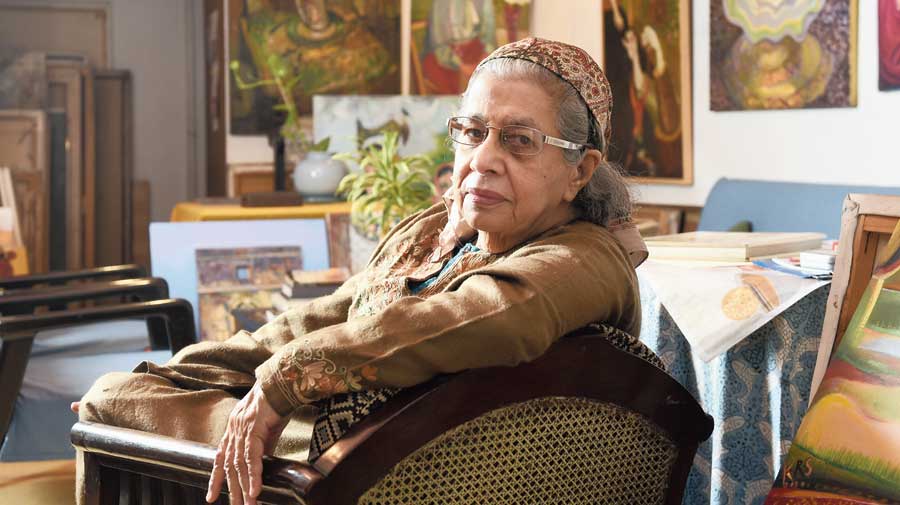 Seated in the drawing room of her Auckland Square apartment, Katayun Saklat, painter and stained glass artist, though not necessarily in that order, speaks about her exceptional life and her art, as a number of her assistants come and go, pleasantly interrupting her for instructions.

Saklat, 82, is a charming and exuberant personality and the room is a bit like her. But then it is also her gallery, Gallery Katayun. There are paintings on the floor, against the tables and chairs, and of course on the walls — a mix of still lives and portraits. An easel, with work in progress, stands near a door. Above the settee hang three large paintings. The one in the middle is a striking portrait of an old Parsi woman, who was an older friend of Saklat, sitting inside the Tower of Silence.

Another shows her parents. Two others feature another striking old Parsi woman, who suffered from Alzheimer’s.

The people in her paintings are distinct presences, sometimes disturbingly.

Gallery Katayun, started in 1989, used to hold regular shows till a few years ago here. Now it still holds shows, but at other addresses. Saklat also uses the apartment for her stained glass work. It has been her home since the early 70s.

But speaking of homes, Saklat goes back to her first one.

She grew up in a large three-storey house in Grant Lane. “It was a happy house. There was always something happening there,” said Saklat, trying also to explain the constant activity around her now.

In the Grant Lane house, each whimsical floor had its own spectacle. The family — Saklat was the youngest of three sisters — led its own bustling life. And there were lots of people. “We never locked our doors in that house,” she said. Later, through her, a lot of contemporary art would also move in.

But art was there already. “We never bought pictures to hang on the walls,” said Saklat. Her father was a natural artist. All the frames on the wall contained monochromatic sauce pen stick sketches, mostly landscapes, by him. Her mother painted in oil on satin fabric — on saris and cushion covers and tea cosies household objects. Those were finely detailed.

After studying at Calcutta Girls’ High School, Saklat had enrolled at JJ College of Arts in Mumbai, then Bombay. But she did not like being taught commercial art at JJ and came back to Calcutta to enrol at Government Art College first and then at Indian College of Arts and Draughtsmanship.

She thinks that the teaching of art can really improve here. What are we taught here?... Not even anatomy, she said.

But at Indian College of Arts she had met graphic artist Arun Bose as a teacher. Here she also met her group — young artists who would set up a studio together, at the Grant Lane house. Other than Saklat, this group included Bikash Bhattacharjee, who would become famous later, Amal Ghosh, Mrinal Danda, Maya Danda, Smriti De Roy and Panchunarayan Gupta, “a fine watercolourist”. These were the early 60s.

The studio was set up by the artists themselves on the first floor of the Grant Lane house. They put together everything themselves, from the easels to a loft for paintings.

Bhattacharjee’s famous doll series was inspired by a doll that belonged to Saklat’s niece. Saklat also painted the chubby doll in a white dress. But by the time the artists were done with it, the niece had grown up enough to not want the doll any more.

On the floor below, artists Lalu Prasad Shaw and Suhas Roy were tenants, who had decided that the Saklats would be their landlords.

One can imagine the heady atmosphere in the house, the young minds fired by imagination, the laughter, the conversation. “But we had to wind up by 8pm every day, as our family had to have dinner together,” said Saklat, who has always supported young artists and stressed the need for encouraging environments.

As it often happens, some of the artists in the group moved away. But Bhattacharjee remained a regular. When in the early 70s the Saklat family moved to the Auckland Square apartment, Saklat, one of her sisters and Bhattacharjee set up Gallery 52 in Chowringhee Road.

The Grant Lane house features on the cover of the catalogue of an exhibition in 2009 that was held in Gallery K2, with which Saklat was associated closely. The painting, beautifully done, shows the top two floors, as if standing on their own.

Soon after the family to the new apartment, Saklat’s life would take a turn. In those days, she was also feeling a little guilty about being dependent on her father financially. Saklat was beginning to get known. However, even if art wins appreciation, it often pays very little.

In 1973, she was in the UK and got three grants from the British Council. She had always wanted to learn an old craft. So when she heard about the noted stained glass artist Patrick Reyntiens, who taught stained glass making in Buckinghamshire, she decided to learn it from him.

In her first encounter with Reyntiens, she saw him perched two-storeys high, fixing something. He showed her two small bits of blue glass, from that height, and asked which one she liked. “There are 3,000 shades to choose from. The glass here is like pigment in painting.”

The effect can light up the dreariest building. Perhaps it was not a coincidence that Saklat chose stained glass. One can see how light and colours appeal to her. “Stained glass can change the environment,” she said. Two of her best works have been installed in the city. One is a glass wall, which is ceiling to floor and wall to wall, a landscape with birds, butterflies and an island in the middle. This is owned privately.

The other is a large window of several panels, inside the Fire Temple, depicting the seven Amesha Spentas (seven archangels) with Zarathushtra in the middle.

Stained glass cannot be installed anywhere; there must be light falling on it. “The north light is good for stained glass,” she said. And the work changes, with every change in light.

Very recently, Saklat has taken up the challenge of metal staining work. It looks like a brave new work.

But the past is always present. The paintings she is working on now seem to take her back to the past. One is a family portrait, of herself with her parents and sisters. The other of her principal at Calcutta Girls’. The third features a lot of butterflies. She has borrowed them from her mother’s tea cosies.

“I cannot do them so well, though,” said Saklat.

“It’s only now that I realise that she was a much better artist than I am.”