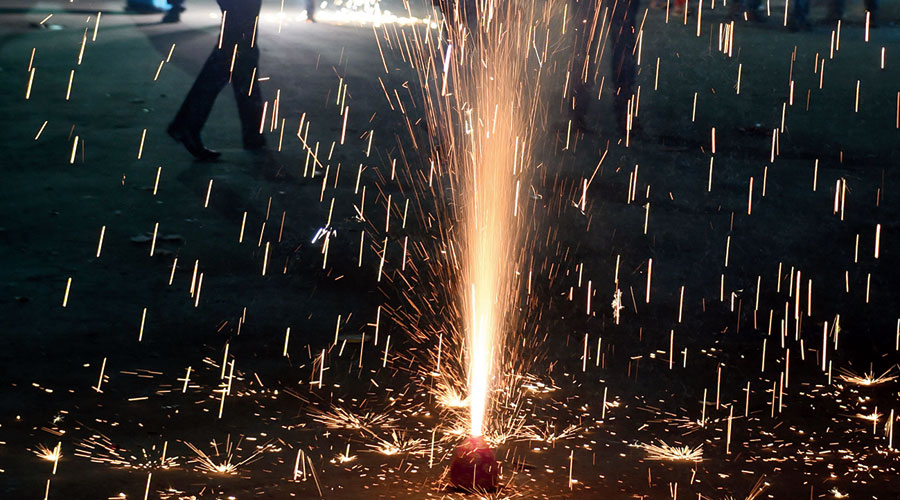 A late Kali Puja and Diwali this year means the air quality that day could be more toxic than previous years as pollutants released from firecrackers will float in cool air for a longer duration, air quality management specialists have warned.

If firecrackers are burst indiscriminately this year, too, the effect on the air quality will be far more severe, the specialists said.

Kali Puja and Diwali fall on November 14 this year. Last year, Diwali was on October 28 and Kali Puja the day before.

Air quality management experts have urged the authorities to widely publicise the need to refrain from bursting firecrackers. If people are not aware, no regulatory body can enforce the ban on the bursting of illegal firecrackers, they said.

The Covid-19 pandemic has made it all the more necessary to prevent a spurt in air pollution during Diwali, the experts pointed out.

Doctors said inhaling toxic air could affect the functioning of the lungs. K. Srinath Reddy, the president of the Public Health Foundation of India, said: “The innate immunity of a person decreases in cold weather. It makes people more vulnerable to infections. Inhaling pollutants released by firecrackers can cause inflammation. If the novel coronavirus infects such a person, the likelihood of de-veloping complications is more.”

Reddy, also a member of the National Task Force on Covid-19 management, called for “a smoke free Diwali and Kali Puja”.

Anupam Debsarkar, a professor at Jadavpur University’s civil engineering department, who specialises in environmental engineering, explained why pollutants lingered in the air for a longer duration in winter.

During summer the warm air closer to ground rises and cooler air fills the vacuum. Because of the air circulation, the pollutants get dispersed in summer, something that does not happen in winter, said Debsarkar.

Anumita Roy Chowdhury, the executive director of New Delhi-based Centre for Science and Environment (CSE), said “the levels of PM2.5 reach 10 to 15 times the permissible limit in Calcutta immediately after Kali Puja and Diwali every year”.

PM2.5 are tiny particulate matters that can go deep inside the lungs and disrupt their functioning. Prolonged exposure to PM2.5 can lead to severe diseases, including cancer, doctors said.

An official of the West Bengal Pollution Control Board told Metro that they were not being able to raid firecracker factories like previous years because of the Covid pandemic.

“The raids have been fewer this year. But we have information that firecrackers are being manufactured in lesser numbers in our state. We are not sure though about the level of production in Tamil Nadu’s Sivakashi and China,” said the official.

“Apart from the locally manufactured ones, a lot of firecrackers that are sold in Bengal are made in Sivakasi and China.”

Reddy said he apprehended crowding during Diwali, which could further increase the risk of the spread of Covid-19. “As cold air takes longer to disperse, crowding will mean clouds of the novel coronavirus released by an infected person would float for a prolonged period. Even in an outdoor environment, the risks of getting infected will remain,” added Reddy.