Parkomat repairs for full use 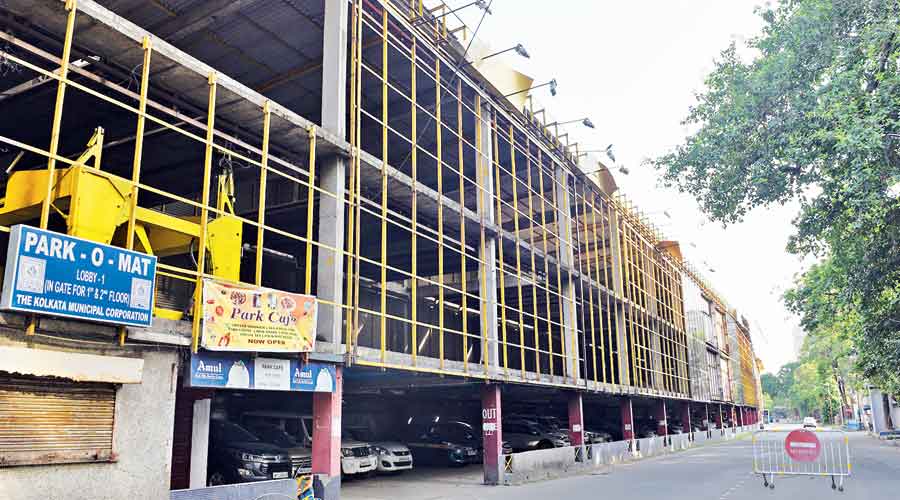 Parkomat, a multi-storey car park at the intersection of Rawdon Street and Park Street, will undergo repairs to make it fully operational. Half the capacity of the facility has been lying unused for years, while cars found it difficult to get a parking space on and around Park Street.

Officials of the Calcutta Municipal Corporation (CMC), which manages the car park, said a company had been hired to repair the faults in the hydraulic system in the third and half of the second tier of the three-tier facility. The repairs will allow about 70 more cars to be parked at Parkomat, said an official.

Parkomat can accommodate 165 cars but it has been operating at half its capacity for years. A fully functional Parkomat will benefit many people who drive to their offices located on Park Street or some of the roads running perpendicular to it and have to struggle every day to find a parking spot.

The CMC official said he had received many letters from such people who spoke about difficulties they faced in parking their cars.

“Once all slots are functional, patients and their families visiting Bhagirathi Neotia Women and Child Care Centre will find it easier to parktheir cars. Now they have a harrowing time scouting for space,” said a traffic police officer.

“We have selected a company to do the repairs. The repairs will be completed within a month after they start. We are waiting for funds to be allotted for the repairs before we ask the company to start work,” said a CMC official.

The tender for the repair project was floated before the pandemic struck in India. Since April, no work could be done. Recently, there has again been some progress and the CMC officials hope repairs will start soon. “The pandemic will end one day. We want to make the facility fully operational before things become normal again, which is why we are pushing ahead with the project,” an official said.

“In the pre-pandemic period, many cars would park along the sides of Rawdon Street, especially near Bhagirathi Neotia hospital. The cars mostly belonged to patients visiting the hospital. Many of them were pregnant women and babies. The cars would eat up the road space at the junction of Rawdon Street and Park Street. If the capacity of the Parkomat is increased, the road will hopefully be free,” said a police officer.

The Parkomat was built as a joint venture between the CMC and Simplex Infrastructures Limited. It began operation in 2000. An official of Simpark Infrastructure, a group company of Simplex that ran Parkomat, said that even when the hydraulic system was fully operational, the upper tiers remained empty mostly. “Cars used to park along the roads and police did not force them to enter Parkomat,” he said.

The parking charges at Parkomat are higher than what one has to pay to park a car on a road. The Parkomat rates for four-wheelers and two-wheelers are Rs 35 and Rs 11 an hour, respectively. The corresponding rates for road parking are Rs 10 and Rs 5.

Another hydraulic parking facility in the city, outside New Market, has been functioning at around half its capacity for years. The facility can accommodate over 200 cars but now has slots for only 100-odd cars.