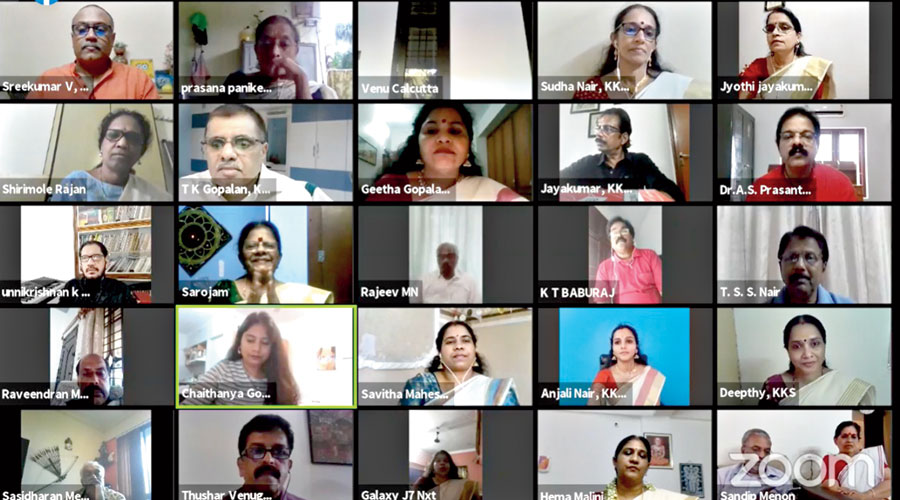 Malayalees in Calcutta and outside celebrated Onam on the virtual platform on Sunday.

Among the programmes held on Zoom was one by the Calcutta Malayalee Samajam and another by by the Kolkata Kairali Samajam. Both programmes were streamed live on the Facebook pages of the associations.

The Malayalee Samajam’s programme was inaugurated by A.K. Balan, Kerala’s culture minister. A performance by Matha Perambra, a musical troupe from Kerala, was one of the prime attractions.

“The pandemic has curtailed the scale of the celebrations. But the virtual celebrations went off very spontaneously,” said N. Gopi, the secretary of the Malayalee Samajam.

The organisation distributed dry groceries to needy people in the Charu Market area on Friday and Saturday.

Thiruvonam, the most important day of  the 10-day Onam festival, falls on Monday.

Large pookkalams, or rangolis made of flowers, were shared on the screens by many participants on Sunday.

A dance performance at the Calcutta Malayalee Samajam’s programme

The programme of the Kairali Samajam was inaugurated by Madhupal, a writer, actor and director from Kerala. He spoke of the distress caused by the pandemic to the theatre fraternity.

One of the highlights of the programme was a “mid-reading session” by Anand Mezhathur, a magician. The programme also saw several musical performances. “We had people joining in from Australia and the UAE,” said Sreekumar V., one of the organisers.