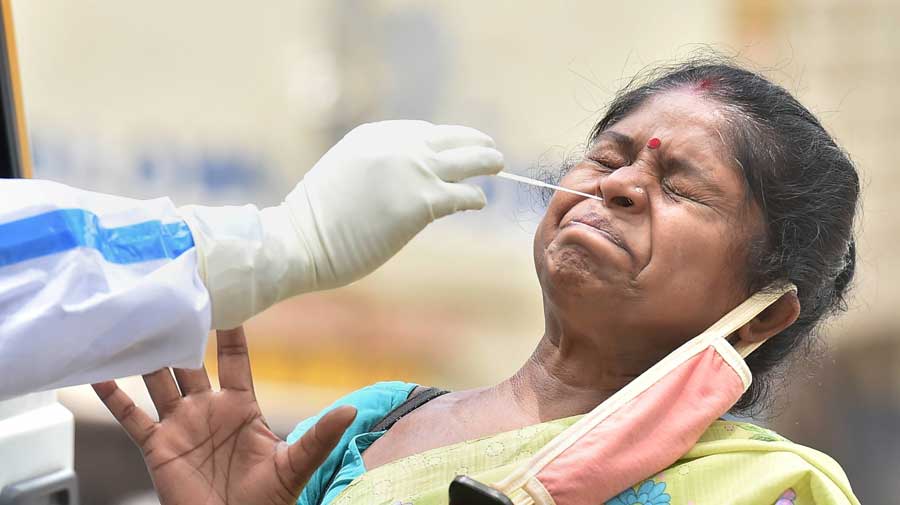 A health department order capping the rates of the Covid-19 test by the RT-PCR method at Rs 1,201 was circulated among private hospitals and laboratories on Thursday afternoon.

In the evening, another order was issued stating that the earlier order had been “kept in abeyance till further order”. Officials said the government was reviewing the existing cap on the test rates — Rs 2,250 — and would bring it down.

Sources said the day’s first order was greeted with protests from private healthcare units. Also, senior government officials felt that the rate was unrealistic and many private laboratories could either stop the test or reduce the number of samples tested.

“...after careful consideration of different aspects, the undersigned is directed to fix the rate of RT-PCR COVID-19 testing for the private laboratories, as under,” stated the first order and mentioned the rate as Rs 1,201. The order was dated September 28.

“Due to unavoidable circumstances, the order (mentioning the memo number and date) has been kept in abeyance until further order,” said the second order.

“The earlier order was internal and was not meant to be circulated. It was a mistake,” said a senior health department official.

Later, health secretary Narayan Swaroop Nigam said the government would bring down the cap. “We are reviewing the rates of RT-PCR testing for Covid-19 for private laboratories to bring them down further. It will be decided soon,” Nigam said. According to sources, the government was looking at rates between Rs 1,400 and Rs 1,600.

In the last week of June, the government had capped the rate for the RT-PCR test for Covid-19 at Rs 2,250 for private laboratories and hospitals. Before that there were reports that some of the private units were charging Rs 4,000 or even more for the test.

Health department sources said the state government was planning to bring down the test rates further because of a drop in the price of testing reagents. Also, some of the states have capped the rates at Rs 1,600.

“The recent rates quoted in the tenders by the companies that make the RT-PCR test- ing kits have  been much less compared to what they used to be earlier. So, we feel that the private laboratories, too, should bring down the rates,” said a health department official.

An official of a private laboratory that conducts Covid tests in Calcutta agreed that the rates of testing kits had come down in the past few months. “The cost of extraction kit has come down from Rs 350 to Rs 200. The testing kit price has come down to Rs 350 from Rs 700,” he said. “You also need to consider the cost of personnel, PPE and other gear and infrastructure. The samples have to be stored at -70 degrees centigrade, for which power consumption is huge.”

Some private hospitals said Rs 1,201 was not viable and that they would stop conducting the Covid test if they were forced to accept the rate.

“The government buys reagents in huge volumes and so can negotiate a cheaper rate. But private hospitals buy them on a much smaller scale and so the prices are higher. Also, we had to spend a huge amount on setting up the infrastructure,” said Rupak Barua, the president of the Association of Hospitals of Eastern India and group CEO, AMRI Hospitals.

“We want to help common people but the rate has to be viable. The fact that many of the healthcare units are collecting samples from home also needs to be considered,” he said.

Sudipta Mitra, the chief executive of Peerless Hospital, said the government should consult a professional agency before bringing down the rates.

Passengers on the Kolkata Heritage River Cruise of the West Bengal Transport Corporation during its first run on Thursday.
Pradip Sanyal
Step by step

Passengers on the Kolkata Heritage River Cruise of the West Bengal Transport Corporation during its first run on Thursday.

A ticket for the 90-minute ride on the Hooghly at 4pm and 6pm (Monday-Friday) will cost Rs 39. On weekends and holidays, the services will be available at noon and 2 pm as well.

Passengers on the Kolkata Heritage River Cruise of the West Bengal Transport Corporation during its first run on Thursday.
Pradip Sanyal

The cruise will begin and end at the Millenium Park jetty. Passengers will be provided with drinking water and a heritage navigation brochure for free. Food can be bought on the vessel, which will have a dedicated selfie booth.

“The idea is to make the heritage river cruise experience affordable and popular among the youth,” Rajanvir Singh Kapur, the WBTC managing director, said. “The tickets will be available at the jetty for now. Gradually, it will be available online.”

Those on the vessel will get to see Mayer Ghat where Sri Ma Sarada, wife of Sri Ramakrishna Paramhansa, used to visit daily. Ma Sarada stayed near this ghat from May 23, 1909 to July 20, 1920.
Pradip Sanyal

Those on the vessel will get to see Mayer Ghat where Sri Ma Sarada, wife of Sri Ramakrishna Paramhansa, used to visit daily. Ma Sarada stayed near this ghat from May 23, 1909 to July 20, 1920.

They will see Nimtala ghat where Rabindranath Tagore, Acharya Prafulla Chandra Ray, and Acharya Jagadish Chandra Bose among other luminaries were cremated apart from Armenian ghat that was built in 1734, the Eastern Railway Headquarters Building, the BBD Bag rail station and the Chandpal ghat.