3 from each Puja club for idol immersion 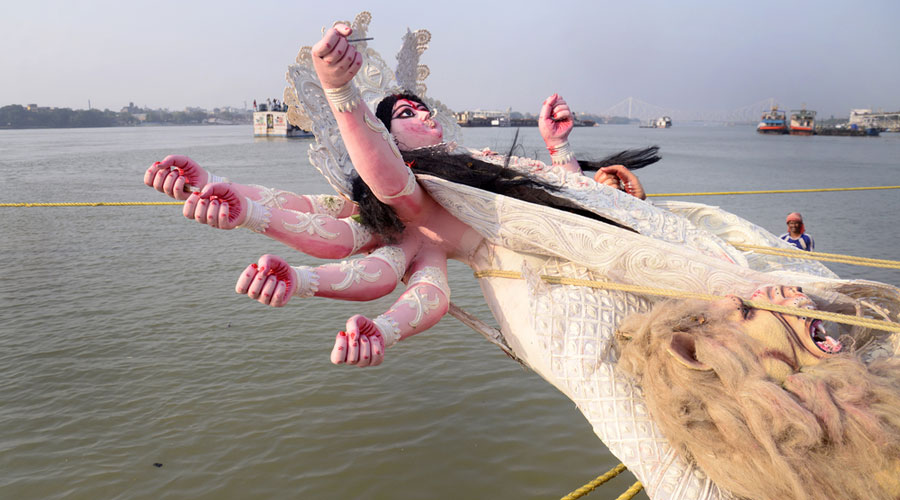 Several city police officers said there was no such guideline but long immersion processions would not be allowed.
Shutterstock
Subhajoy Roy   |   Calcutta   |   Published 21.10.20, 04:28 AM

Every Durga Puja committee can have only three people at an immersion ghat and committees will have to tell police the day and the ghat they want to use for immersion, the CMC has said.

The Calcutta Municipal Corporation took the decision at a meeting on Tuesday.

Knowing how many idols will be immersed at a particular ghat and on which day will help the civic body make proper arrangements, Debashis Kumar, a member of the CMC’s board of administrators, said. “That way no puja committee has to wait for long at the ghats.”

It is still not clear, though, if there is any bar on the number of people who can accompany the idol till the immersion ghat.

Several city police officers said there was no such guideline but long immersion processions would not be allowed. The police hoped a few people would be interested in going to immersion ghats because of the bar on processions, an officer said.

Immersions will be allowed between October 26 and 29, Kumar said. “We will not allow more than three people at the ghat. We will install LED screens in some of the ghats for people to watch the immersion proceedings.

Immersions will be allowed between 10am and 6am the next day at 15 ghats along the Hooghly.

But Kumar, too, was not sure how many people could accompany an idol till the ghat. “It is up to the police to ensure not too many people get together in a lorry and head to a ghat.”

An organiser asked if the civic body would ensure the area outside a ghat was not crowded. “Installing LED screens can lead to crowding,” he said.

Chief minister Mamata Banerjee had on September 24 said that the government would not organise the immersion carnival on Red Road this year because of the pandemic.

She had urged puja committees to avoid large immersion processions. The officers in charge of police stations will have to coordinate and fix immersion dates in such a way that ghats do not get crowded, she had said.

The other regular features like a separate zone to throw flowers and other puja items will be there this year, too. Idols will be picked up immediately after immersion to prevent the river from getting polluted, a CMC official said.

They will then be taken to the Dhapa landfill site.