Residents, hawkers, shops and rickshaw drivers are flouting norms and walking in and out of it as they please 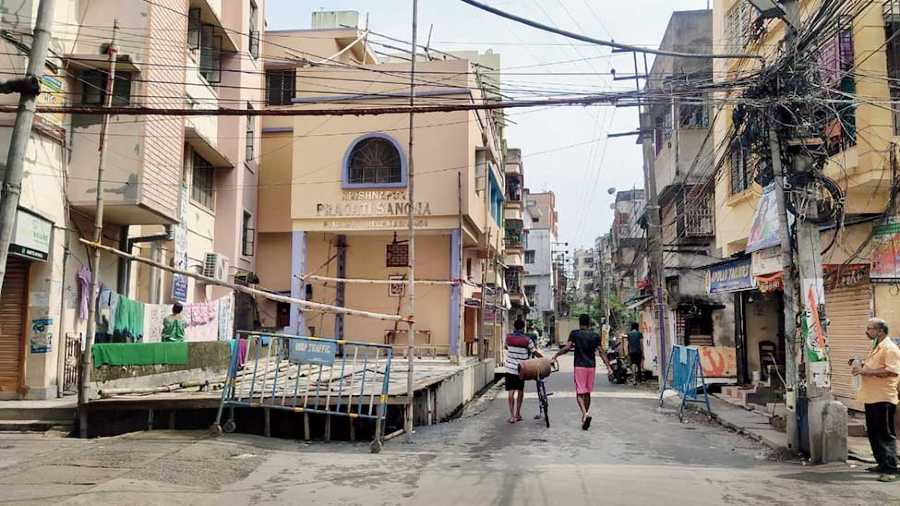 The stretch of Kestopur declared a containment zone with guard rails, restricting movement, removed to a side.
Picture by Snehal Sengupta
Snehal Sengupta   |   Salt Lake   |   Published 25.06.21, 07:34 AM

A stretch in Kestopur has been marked as a micro-containment zone after a spike in Covid cases but residents, hawkers, shops and rickshaw drivers are flouting norms and walking in and out of it as they please.

A guardrail, pushed to a corner, is the only indicator that this 100m stretch of Rabindra Pally around the Pragati Sangha club is a containment zone. Bidhannagar Municipal Corporation had marked it as such on June 16 and civic officials placed bamboo poles and guardrails on the main road that leads into the locality.

From VIP Road, this zone is a 10- minute ride and from Salt Lake, it is across the canal from the Tank 8 footbridge around AK Block.

Anupam Mondal, Ward 24 co-ordinator under whose jurisdiction the area falls, said they decided to set up the zone as at least a dozen families who live in the area opposite Pragati Sangha club had tested positive for Covid-19. “Many people had fallen sick there over the past two weeks. They had been regularly going out to visit markets and even their relatives,” said Mondal.

On Tuesday, The Telegraph Salt Lake visited the stretch and found that the guardrails had been displaced and kept on the sides of the street. Residents were moving around without any restrictions. Cars, bikes as well as electric rickshaws were entering and leaving without any checks. Nearly all the shops, including tea shops and small eateries on the road, were open and many residents were out shopping for groceries. Very few were wearing masks.

Bikash Chattopadhyay, a retired government school teacher who lives in the locality, said people seldom wore masks when they were out in the locality. “I know of several people who had tested positive here but were stepping out regularly. We were living in fear. Now some of those people have recovered but there are quite a few active cases in the area,” said Chattopadhyay.

Tukai Saha, who runs a small shop selling tea and sundry items, said many of his neighbours had tested positive. “A lot of people here are still down. Nobody is adhering to containment norms,” said Saha.

Mondal, the ward co-ordinator, said he had made repeated requests to residents to adhere to Covid-19 protocols and not step out in case anyone tested positive in their family.