Pandals to be open on four sides, says Bengal government 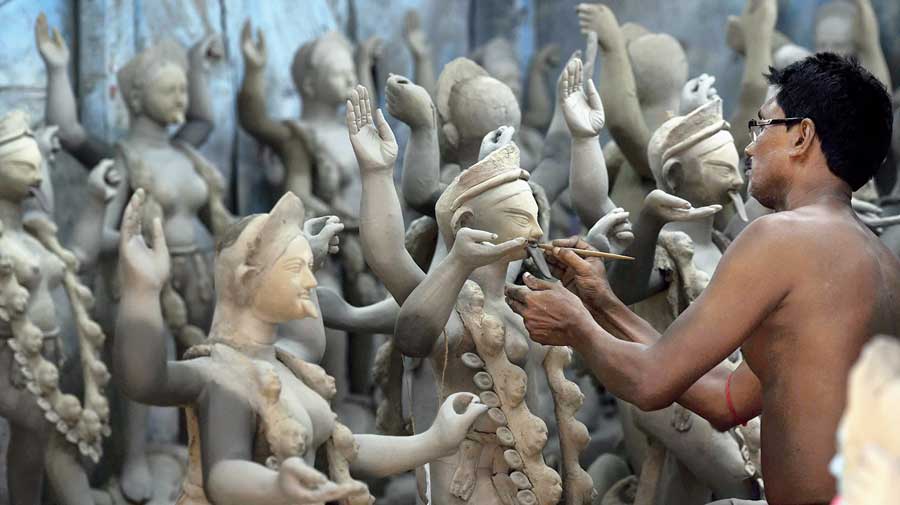 The state government on Tuesday instructed Kali Puja organisers to keep all four sides of the pandals open, plan immersion in consultation with the respective local police stations and follow all rules related to health and hygiene.

The government, which set the norms to prevent a surge in Covid cases after the festivities, also made an appeal to the conscience of the citizens to avoid organising immersion processions and bursting firecrackers this Kali Puja and Diwali.

Although fewer people step out for pandal-hopping on Kali Puja compared with that of the Durga Puja days, many Kali Puja organisers build large pandals and are known for attracting huge crowds to their immersion processions.

“According to the guidelines that have emerged during the meeting with the chief minister, the puja pandal should have its all four sides open. The idol should have only the ceiling. All health and hygiene rules should be followed,” said Bengal chief secretary Alapan Bandyopadhyay.

The chief secretary appealed to the clubs and puja committees to avoid organising immersion processions, keeping in mind the Covid pandemic. Every year thousands of people parade across the city roads as part of Kali Puja immersion processions. Separate police arrangements are made to handle the processions and immersions.

Many people stand along the roads to witness the pomp.

“It will really be worrisome if clubs organise immersion processions this year. It will be impossible to maintain social distancing norms in such processions,” said an inspector posted in Calcutta police’s south division.

Last month, the state government had issued specific directives related to Durga Puja, including mandatory wearing of masks and keeping hand sanitisers for visitors at pandals. The immersion carnival along Red Road was cancelled to avoid gathering.

The chief secretary on Tuesday reiterated the appeal to wear masks.

Sources said the officials have reasons to be hopeful that people would support the government’s initiatives because the Covid positivity rate in Bengal had not increased after Durga Puja. “Some people did come out (during Durga Puja) but the majority followed the protocols. The decreasing positivity rate is giving us hope even though many had apprehended that the situation could turn critical after the Puja,” the chief secretary said.

Sources said that just before Durga Puja, Covid positivity rate was nearing 10 per cent in the state. Now, it has come down to below 9 per cent, which is a good sign.

The rate, however, is much higher than the national average, which has been below 5 per cent over the past week or so.

The state government urged residents not to burst firecrackers. But till Tuesday, there was no embargo on the sale or manufacture of firecrackers in the state.

Babla Roy, the secretary of the West Bengal Fireworks Manufacturers’ Association, told Metro that they did not receive any direction or official communication from the state government about any such embargo till Tuesday night.