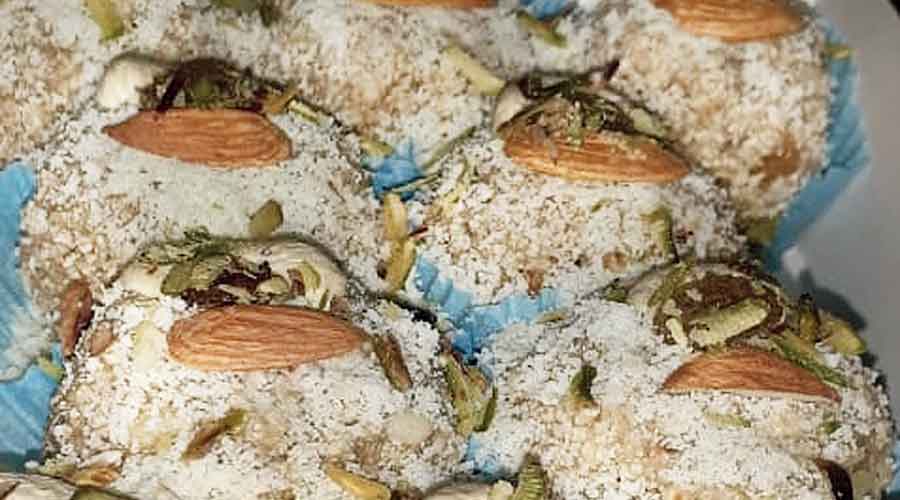 Joynagar Moa has managed to get for itself a logo that signifies its unique local identity and a recipe that defines what moa is supposed to be all about.

Six years back, in November 2014, the delicate sweet made of khoi (popped rice) had bagged a geographical indication tag for its uniqueness that would be only found across two blocks of Joynagar in South 24-Parganas.

Over the last few years a section of moa manufacturers have managed to do what rasogolla manufacturers are still struggling with the “Banglar Rasogolla” GI tag — create a product adhering to the original recipe that would offer a distinctive aroma and mouthfeel.

With these manufacturers finally ready with their produce, a unique brand of Joy-nagar’s Moa would sell this winter.

Over 20 such manufacturers from different parts of Joynagar — who have bagged the “authorised user certificate” — have come together and tied up with almost all the best selling mishti shops across Calcutta to sell Joynagar Moa, the authentic one.

“Anyone can challenge the manufacturer for the authenticity of the moa that will be sold in packs of six, 10 and 12 pieces,” said Ashok Kumar Kayal of Joynagar Moa Nirmankari Society, the one that had pitched for the GI tag with the Union ministry of commerce and industry. “It’s not easy producing this moa abiding by all the norms that have been laid down by the GI council. It’s a strict mix of human skill and hygiene while following the prescribed flow-chart.”

A moa to be truly of Joynagar has to be between 50 and 75 gram in dry weight and must be made from Kanakchur khoi and should have at least seven ingredients including nolen gur , ghee, cardamom, khoya kheer, sugar, dry grape and cashew nut.

“Anything else that sells as Joynagar Moa is not the one that has been certified by the GI council,” said Dhiman Das, director of KC Das Private Limited. “Some sweet-shop owners have come together to save this product in its original form and hence, this initiative to sell original moa.”

as Mishti Udyog, who would sell the branded moa from their outlets in Calcutta and beyond.

Just like the uniqueness of “Banglar Rasogolla” lies in being spongy, fluffy and its smooth texture “with less chewiness”, the speciality of Joynagar Moa is the Kanakchur khoi.

Kanakchur variety has a slender grain and is scented, short and bold, everything that makes it particularly suited for the uniqueness of Joynagar Moa.

The origin of Joynagar Moa dates back more than a century. The year 2004 was the centennial year of ‘Moa of Joynagar’.

Ashutosh Das, a resident of Das Para of Sreepur village in Joynagar had first started the moa industry in the Bengali in 1904. His son, Jawaharlal Das, used to visit the house of Rani Rashmoni at Janbazar carrying moa.

Over the years, moa found acceptance as a delicate sweet and gained popularity across the globe.

But the moa that would be sold across Calcutta or Bengal would not rarely meet the standards that were set down some six years back.

Why? Primarily because of the detailed process that would be involved in preparing an original moa was missing. Here is how the process goes.

Ten litres of nolen gur, for instance, would have to be boiled to get a litre of pure gur. Then comes preparing the khoi. There are male and female khoi. Female khoi, which are bigger in size, is not preferred for moa. They are separated out. Good male khoi are only mixed with hot nolen gur in a big iron pan.

Next the khoi has to be immersed in nolen gur. The stirring has to be done with a wooden ladle. It’s a long and tedious process.

Artisans would allow the mix to cool before using their cleaned hands to give the shape after smearing their palms with pure ghee.

Finally, flavouring agents are added. That would in-clude sugar, cashew nuts, cardamom, ghee and dry grapes. Average weight of each moa would be between 50 and 75 gram.

Area: The area of production of Joynagar Moa lies between Joynagar Block I and Joynagar Block II of the Joynagar-Mazilpur municipal area, which is around 53km south of Calcutta in South 24-Parganas

Weight: Average weight of each Moa is between 50 and 75 gram.