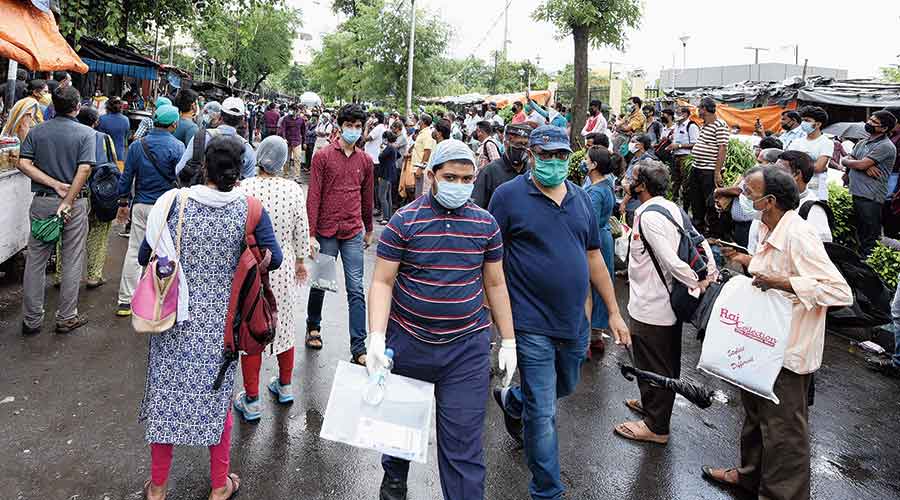 Students with parents and guardians in front of TCS Gitobitan in Salt Lake on Wednesday.
Picture by Gautam Bose
Jhinuk Mazumdar   |   Calcutta   |   Published 03.09.20, 03:08 AM

These are the number of students who appeared for the JEE(Main) exam in Calcutta in the past two days.

On Wednesday, 46 per cent of students remained absent for the BE/BTech entrance examinations in the two centres in Calcutta.

Chief minister Mamata Banerjee told a news conference that as many as 75 per cent students in Bengal could not appear for the JEE (Main) exam.

“I found out that in our state for the JEE exam yesterday, there were 4,652 candidates, out of which only 1,167 candidates appeared, meaning 25 per cent attendance. Around 75 per cent students could not attend in Bengal itself,” the chief minister said, quoting Tuesday’s numbers.

Metro had reported on Wednesday that around 70 per cent students had not taken the tests in Calcutta’s two centres in TCS Gitobitan in Salt Lake and the Institute of Instrumentation & Metrology in Belghoria on Day 1.

There are 15 centres in Bengal, three of which are in Howrah.

The chief minister said students were in “great trouble”.

“So many students are being totally deprived. They are not able to attend the JEE exam also. That is why we requested the central government so many times to review the matter again so that students are not deprived,” Mamata said.

The chief minister said the state had made arrangements in line with the guidelines but yet 75 per cent students could not appear and were “deprived”.

At TCS Gitobitan, the JEE (Main) centre at Salt Lake, on Wednesday, 3,376 students had been registered to appear for the exam in the two shifts -- 1688 in each. In the first half, 709 students were absent and 858 in the second half, said officials associated with the exams.

In Belghoria, out of the 119 students in two shifts,  74 were present. Some of those who turned up had come from hundreds of kilometres away.