Indian Association for Cultivation of Science's ‘climbdown’ on Hindi after protest

Officials clarify: ‘Rajbhasa’ only for ‘a part of administrative office work’ 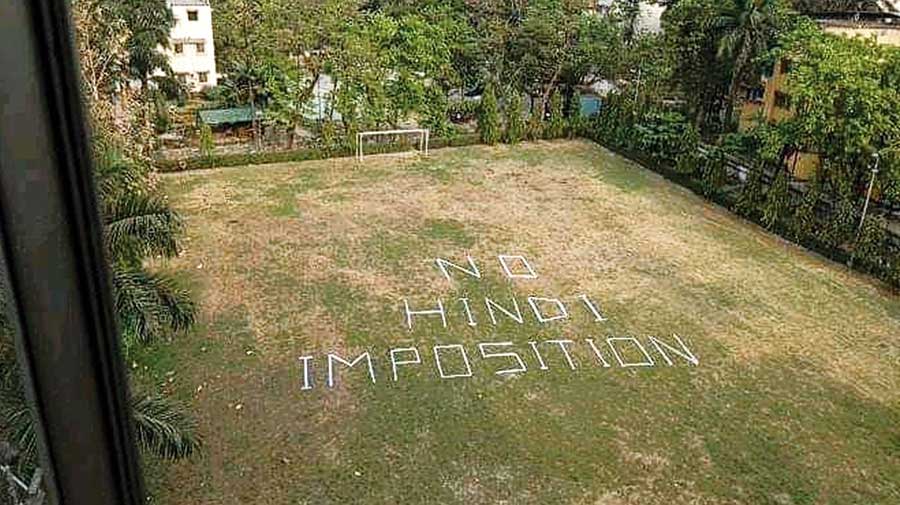 “No Hindi Imposition” written on the football field of The Indian Association for the Cultivation of Science on Wednesday
Telegraph picture
Subhankar Chowdhury   |   Jadavpur   |   Published 25.03.21, 01:50 AM

The Indian Association for the Cultivation of Science on Wednesday said its purported attempt to impose Hindi on the campus “does not pertain to any scientific research or instructions” but only “a part of administrative office work”.

What appeared to be a climbdown for the time being came after hundreds of students and research scholars from the Jadavpur campus followed health protocols and formed a human chain that snaked through its leafy pathways. The students wrote in large font on the football field: “No Hindi Imposition”.

The 144-year-old institute, many of those associated with it for decades said, had not seen such a protest in many years.

In the circular issued on Wednesday, acting registrar Purbasha Banerjee said: “All concerned are hereby requested to note that the circular…. dated 19.03.2021 does not pertain to any scientific research or instructions or even answering. Only a part of administrative work needs to be done in Hindi as per the Official Languages Act 1963 and Official Language Rule 1976.”

It went on to add that the “Rajbhasha programme" has been there in the institute for many years. “Please note that no new ‘imposition’ order has come from DST (department of science and technology) and it is a part of continuing practice in the administrative matter only.”

On Wednesday, research scholars and undergraduate and postgraduate students assembled on the campus around 3.30pm. They had black badges pinned on them.

“The human chain went past the footfall ground that had written on it: ‘NO HINDI IMPOSITION’,” said a teacher who did not want to be named fearing retribution from the administration.

The human chain lasted for half an hour.

Metro asked several protesters what made them take the unusual step?

A scholar said: “What has unfolded in view of the circular on March 19 did mar the image of the esteemed institution. The protest was organised to convey the message to the authorities that they should think twice before issuing such a circular.”

The human chain dissolved at 4pm and the fresh circular, issued by the acting registrar on Wednesday, landed in the mailbox of the students at 4.45pm.

The circular said towards the end: “While IACS admits making a broadcast inadvertently, but it is not in place that an internal circular had been made public.”

India’s oldest science research institute - where C.V. Raman had in 1928 discovered the Raman Effect, for which he was awarded the Nobel Prize in physics two years later - was told in the March 19 circular that it was not doing enough to meet the Hindi language targets set by the Centre.

After protests, that accusatory note was superseded by one on March 23, which said : “DST… conveyed inadequacy in implementing official language at IACS. Individuals are requested to make a note of the same and approach the part-time Hindi officer of the institute for any help and assistance if needed.”

Many like Harvard history professor Sugata Bose saw a “climbdown” in the latest circular, which tried to clarify that Hindi was not being imposed on the scientific fraternity. But Bose added that the word “Rajbhasha” could mislead people.

Bose went on to add that his mother Krishna Bose, a former MP, was a member of Parliament’s Rajbhasha Committee. “As a member of the committee, her role was to protect various institutions from heavy-handed interventions of those who were over-enthusiastic about Hindi,” said Bose.

Bose added: “An institution like the Indian Association for the Cultivation of Science should be able to stand up to this threat in a dignified way. We should not tolerate this imposition of this concept of Hindu, Hindi, Hindustan.”