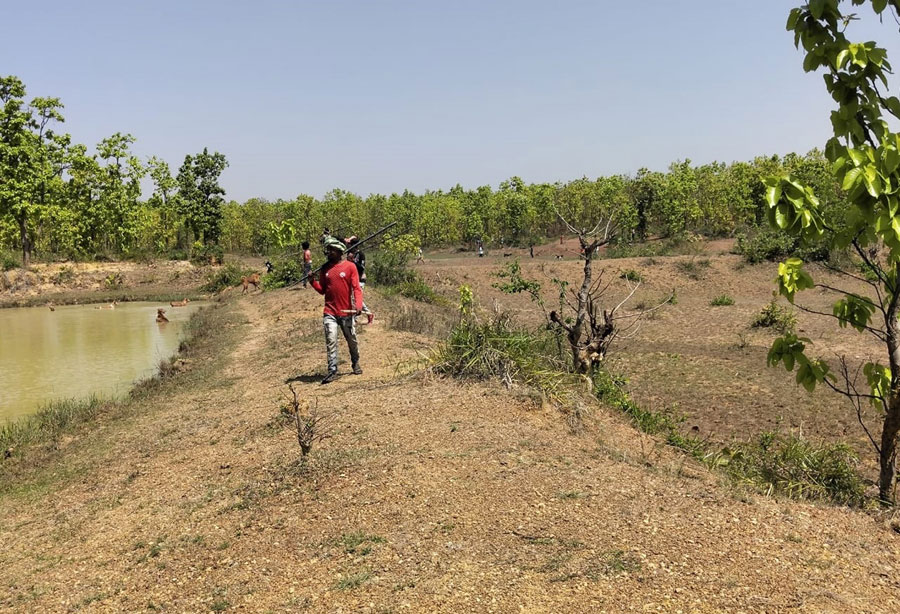 Scores of men allegedly assembled in a West Midnapore forest on Sunday morning for a hunting festival held every summer.

The men, armed with bows and arrows, spears, spades and bamboo poles attached with iron spikes, are said to have gathered outside Enayetpur forest in Gurguripal, not far from the spot where the Lalgarh tiger was killed by a similar hunting party in 2018. The festival sees indiscriminate killing of wild animals.

“Our local volunteers said at least 100 men had assembled. They went into the forest and some were deputed to ensure that nobody else is allowed to track or film them,” said a volunteer of the Human and Environment Alliance League (HEAL), who lives in West Midnapore.

The forests straddling the borders of West Midnapore, Jhargram and Bankura are home to a variety of wildlife — jungle cats, wild boars, monitor lizards and several species of birds.

Some residents said they spotted dead birds and animals but this newspaper could not access any such picture or corroborate the claim.

The pictures available with Metro show a group of men with spears roaming the forest. The gathering, if true, makes a mockery of the ongoing nationwide lockdown enforced to tackle the novel coronavirus outbreak.

When The Telegraph sent the pictures to a senior police officer of West Midnapore, he said: “There is no mass hunting information in my district as of now. We will look into it closely.”

Called after an hour, he said the crowd had been dispersed.

Hearing a PIL filed by HEAL, Calcutta High Court had in April 2019 prohibited hunting wildlife in the garb of rituals in various districts of south Bengal. The court had also directed the wildlife authorities to work in collaboration with the district administration and the police to ensure that hunting festivals were not held.

Meghna Banerjee of HEAL said the hunting party violated the high court order and also threatened to create a public health emergency. “At a time when any kind of gathering can create a public health emergency, hundreds of hunters are on the prowl. The district magistrate and the police are looking the other way. They should immediately enforce a curfew and arrest the hunters,” she said.

A senior forest official in Calcutta said the gathering at Gurguripal was of “around 50 men”. “It is not possible for us to patrol every corner. The forest they gathered in is not a regular hunting hotspot. But as soon as we received information, we sent a team and the men were driven out,” he said. “The men who were driven out did not have any kill on them. If we find any carcasses in the forest, we will take action accordingly.”