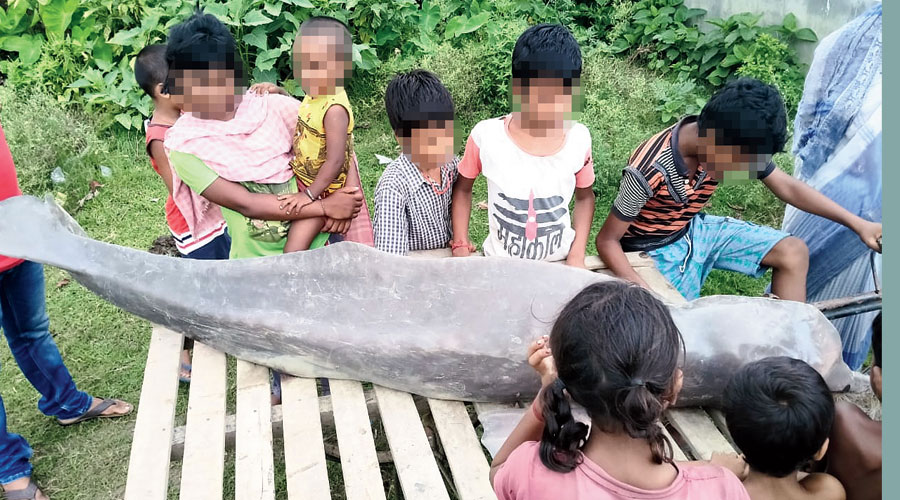 One of the pictures of the dolphin carcass that is being circulated on social media
Telegraph picture
Debraj Mitra   |   Calcutta   |   Published 07.07.20, 03:28 AM

Pictures of kids in Howrah posing with the carcass of a Gangetic dolphin like a trophy have been doing the rounds of social media groups of animal activists since Sunday.

The pictures show the kids with the carcass on a van on the road. The dolphin’s snout is entangled in a fishing net.

Fishermen found the dead dolphin, Platanista Gangetica, along a riverbank in Shyampur II Block, over 60km from the heart of Calcutta, on Sunday morning. The forest department took the body away later in the day. The pictures had been clicked in between, a member of a local NGO said.

The place is near Gadiara, which stands at the confluence of the Hooghly, the Rupnarayan and the Damodar. It is known for sightings of dolphins, Saswati Sen, the state director of WWF India, said.

Sen was part of a 2017 study, which had put their number at 80 along the 534km stretch of the Hooghly in Bengal, between Farakka and Gangasagar.

The body of the dolphin — an adult female — was recovered around 10am on Sunday, a forest official said.

Dolphins need to rise to the surface to get enough air to breathe. But once trapped in nets, they cannot rise to breathe. Dolphins are clever but fishing nets, mostly made of nylon, are very thin and the dolphins’ sonar misses them, the official said.

Gangetic dolphins face a serious threat in Bengal from large-scale discharge of municipal waste, siltation and the countless brick kilns that have sprung up along riverbanks and river traffic.

Conservationists said most people who lived along rivers were unaware of its riches.

“Most are unaware of how precious the Gangetic dolphin is. The first step to any conservation effort is to make them aware,” Sen said.

The state forest department has planned a drive in East Burdwan’s Katwa on Wednesday. Two speed boats will be unveiled as part of the department’s move to monitor the river.

“This is a start. We don’t have many activities around aquatic animals. We plan to engage local people as Ganga praharis (river guards),” Ravi Kant Sinha, the state’s chief wildlife warden, said.

A veteran conservationist said the key to any conservation effort was the involvement of local people. “The forest department should focus on conducting awareness campaigns in local language. They should identify target groups like schoolchildren and fishermen and work with them continuously,” Ravindra Kumar Sinha, the vice-chancellor of Shri Mata Vaishno Devi University in Jammu’s Katra, said.

Sinha is a Padma Shri recipient for his work on the conservation of Gangetic dolphins.

He recommended financial incentives for fishermen if they let go dolphins trapped in nets.

Sinha, the former head of zoology at Patna University, put the numbers of Gangetic dolphins in India at close to 4,000.

Sen of WWF remembered taking part in a series of meetings with hoteliers and traders in Gadiara as part of conservation efforts. “They stopped throwing used bottles and other waste into the river after the traders’ association installed bins,” she said.

In Howrah, the dolphin’s body has been sent for post-mortem. It will reveal the reason for its death, Raju Sarkar, the divisional forest officer, said.

The Gangetic dolphin, an endangered species according to the International Union for Conservation of Nature, can be found in the Ganga-Brahmaputra-Meghna and Karnaphuli-Sangu river systems of Nepal, India and Bangladesh.

Reduced pollution levels because of the Covid-19 curbs have led to frequent sightings of dolphins for the past couple of months, according to environmentalists.