How to catch a Metro from Monday in Calcutta 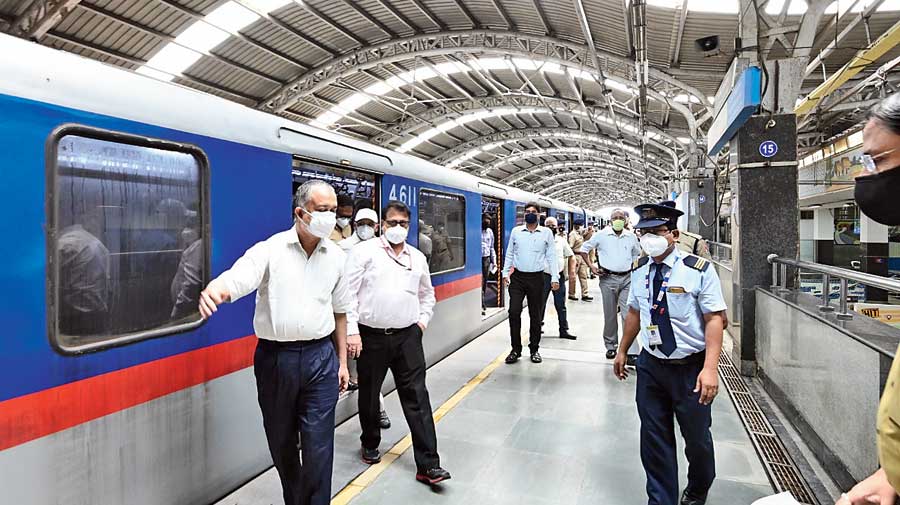 The first Metro train on commercial run in 174 days will leave the terminal stations at 8am on Monday but booking of e-passes will start at 8pm on Sunday, officials of the utility said.

The timings, number of trains and their frequency have been changed. The last trains will leave the terminal stations at 7pm.

“Only smart card users will be allowed to travel by Metro trains,” said Metro general manager Manoj Joshi. New smart cards can be bought from stations — at counters and smart card vending machines at some stations. Existing smart card users can recharge at stations or online — from the Metro app and website.

The smart card will be for access to the platform. To enter a station, a person needs a “QR code-based colour coded e-pass”. The following steps have to be taken to get a pass:

The passenger will have to show the pass at the station gate and enter the station at any time in the designated slot.

“There will be 12 colour codes, each for entry during one slot. The colour for each slot will be known by cops posted at the gates,” said a representative of the agency which has developed the system.

If one books a pass from a smartphone, the colour-coded pass will be downloaded in the service. General manager Joshi said people without phones can access the link through a computer and take a colour print-out of the pass. But Metro sources said the carrier did not expect many people without phones to turn up at the stations.

The booking window will open 12 hours before the first train of the day.

The pass is only for entry into the station. For platform access, a smart card is a must, said Metro officials.

All but two stations will have one gate each for entry and exit. Dum Dum and Esplanade will have two gates each for both.

“We used to carry over 3,000 passengers on a train during peak rush. If that number has to be brought down to 400 per train, we need some checks,” said an official.

Metro had suspended service on March 23 as a precaution against Covid-19. Monday’s service will mark the first commercial run since. On Sunday, Metro will run trains for free for NEET candidates and their guardians.

From Monday, according to officials, 50 passengers will be allowed in each of the eight coaches and they have to keep the space of one seat in between.

Passengers will also have to wear masks and undergo thermal scanning at the station entrances.

The first and last trains will now leave the terminal stations at 8am and 7pm, respectively. The previous timings were 6.45am and 9.55pm. “Many of our staff were dependent on suburban trains to come to work and go home. Since trains are suspended now, they will have to leave a little early,” said Indrani Banerjee, the Metro spokesperson.