How commando shoots down two gangsters in New Town flat

The raid, which lasted barely a few minutes, was planned within a short span of time on Wednesday after receiving specific inputs from Punjab police 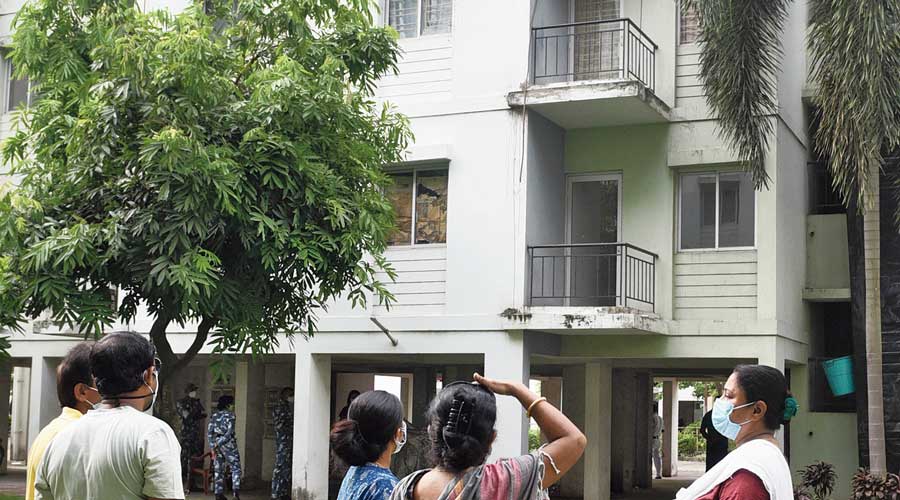 Residents of the housing complex watch the second-floor flat at Shukhobrishti in New Town on Thursday. Bengal police conducted a raid and gunned down two gangsters in the flat on Wednesday.
Gautam Bose
Monalisa Chaudhuri   |   New Town   |   Published 11.06.21, 01:34 AM

A man Jaipal Bhullar and Jaspreet Singh were familiar with was made to knock on the door by police when they went to catch the two “most wanted” criminals from Punjab, dead or alive, on Wednesday afternoon.

Hiding behind the man, later identified as Sushanta Saha, stood inspector Kartick Ghosh and an assistant sub-inspector of the special task force of Bengal police.

To Saha’s left stood the inspector general of the STF, Rajesh Yadav, and crouching below was a commando of the special strike force clad in a bullet-proof jacket, sources said.

Of the two men inside the second-floor flat at Shukhobrishti housing complex in New Town, Jaspreet, alias Jassi, looked through the peeping hole and opened the door to Saha, who had arranged their accommodation.

The moment the door opened, inspector Ghosh pushed Saha aside and barged into the one-bedroom flat to confront the gangsters. The cop was greeted with a hail of bullets, said an officer of the Bengal STF.

Jaipal, who had a bounty of Rs 10 lakh on him, was inside the room. He immediately fished out a gun from under his pillow and fired at Ghosh, who lives in the same complex.

But before Jaipal and Jassi could react further, the commando dragged Ghosh out of the room and opened fire that left the two gangsters riddled with bullets, dead.

“What went in our favour was that it was a one-bedroom flat. Had there been multiple rooms, there would have been a possibility of someone attacking us from another room. In this case there were no surprise attacks. There were no missteps on our end, too,” said a senior IPS officer.

Apart from the team that was at the doorsteps of flat 201 of Block B153, another 35-odd officers of the Bengal STF and the special striking force had positioned themselves around the tower and the adjoining towers to secure the location.

Teams were also positioned at the staircase on the first and third floors of the building where the duo were staying, while one team was at the parking lot.

“All of them were armed with automatic weapons. The idea was to secure all entry and exit points and minimise collateral damage. That it was a residential area with more than 10,000 flats posed a real challenge. We did not want any residents to be harmed in any way,” said an officer.

Sources said cops had placed themselves all over the adjoining towers so they could have an overview of the flat where the gangsters were holed up and relay information to their colleagues on the ground if the accused tried to flee.

Seconds after the operation had started around 3.30pm, residents heard multiple gunshots and male voices shouting. Cops who had positioned themselves outside Block 153 to ensure no one approached the building ran towards the entry-exit point and saw that an injured Ghosh had already come downstairs.

Colleagues said he was bleeding from his left shoulder. A bullet fired by Jaipal had pierced his body below his left scapula.

The raid, which lasted barely a few minutes, was planned within a short span of time on Wednesday after receiving specific inputs from Punjab police.

The recce had started around three hours before the “striking time”.

Several officers entered the premises in plainclothes to keep an eye on the movement of the occupants of flat 201 of Block B153. (This newspaper had mistakenly mentioned the Block as B in Thursday’s report).

Earlier in the day, Punjab police had shared details of the possible location of the duo with the Bengal STF and sought their help.

Thereafter, the Bengal STF planned an operation to nab them and went well-prepared keeping in mind the fact that the accused had been involved in arms and drugs smuggling.