How city coped with waterlogging after overnight rainfall

Cops and local residents were alerting scooterists and motorcyclists to rather walk the stretch with their two-wheelers, instead of riding them 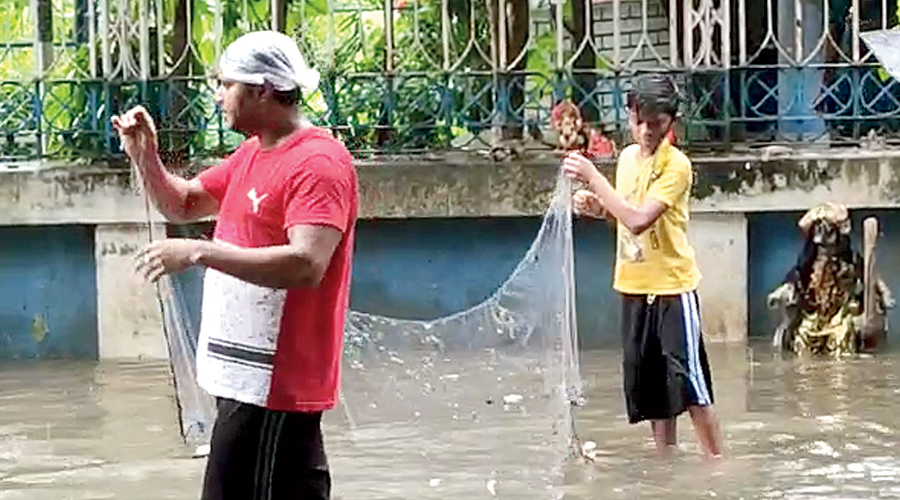 A waterbody at Jodhpur Park overflowed after the overnight rain. “Youths used mosquito nets to catch fish on roads that were flooded by water from the pond,” said Dipendu Sadhukhan, whose office faces the park gate.
Telegraph Picture
Our Bureau   |   Calcutta   |   Published 18.06.21, 02:14 AM

Large parts of the city went under water on Thursday. The Telegraph travelled the city and witnessed the harrowing experiences residents were going through. Here are some -

Slippery tram line at Thanthania Kalibari: Several incidents of motorcyclists and scooterists falling on slippery tramlines were reported from near the spot.

Police said there were no major injuries. Cops and residents of the neighbourhood were alerting scooterists and motorcyclists to rather walk the stretch with their two-wheelers, instead of riding them.

Cave-in at Behala: A part of Behala’s Biren Roy Road West caved in after the night-long downpour and had to be cordoned off.

“It is a two-way stretch. As one flank of the stretch was closed, there was a little more traffic pressure on the road compared with other days,” said an officer of the traffic police.

Congestion on Central Avenue: One flank of the arterial road was waterlogged, resulting in traffic snarls.

Since stricter Covid curbs came into force on May 16, vehicles have been reaching the Shyambazar five-point crossing from Esplanade in around 20 minutes.

On Thursday, it took more than an hour to cover the stretch.

Pumping station woes: A tiff was reported from outside the pumping station at the Behala flying club over an allegation that water was being drained out from one area to another.

Residents of a slum protested outside the pumping station alleging that water was being drained from in front of high-rise buildings into a canal that flows past their shanties.

Pumping work had to be stalled because of the protest.

Cave-in at Uluberia: A stretch of a road in Uluberia’s Kalinagar, in Howrah, caved in, resulting in a 4ft-deep crater.

Five shops along the road got tilted in a dangerous way. There were no reports of anyone being injured. 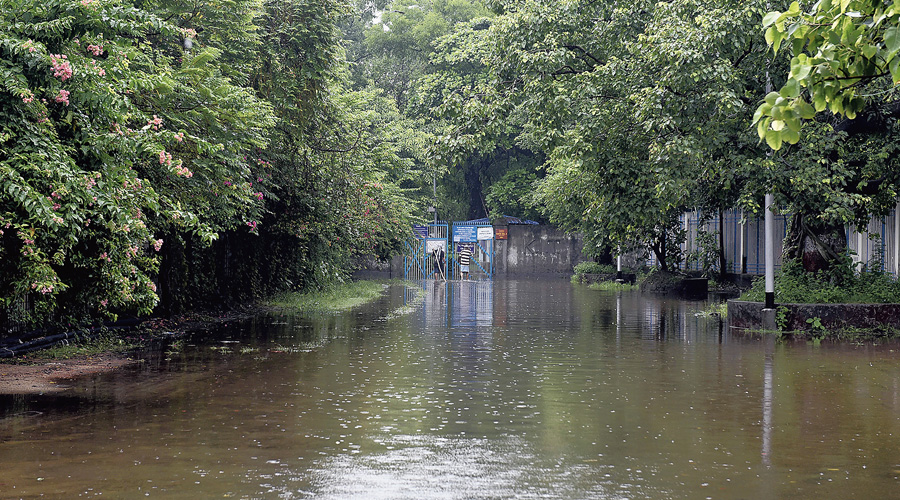 An approach to Rabindra Sarovar that was flooded on Thursday.
Bishwarup Dutta

Waterlogged Sector V: Cars headed for the tech township from EM Bypass and the Chingrihata flyover had to negotiate several waterlogged stretches of the Sector V-bound flank of the Salt Lake Bypass.

If reaching Sector V was a challenge, commuters inside the township had to wade through knee-deep water to reach their offices.

Key crossings such as Wipro, College More and Godrej Waterside were under water.

Drowning at Jagannath Ghat (North Port): Rajesh Shaw, 26, a resident of Strand Bank Road, was drowned in the Hooghly at Jagannath Ghat around 1.30pm. The police said a team from the disaster management group and the river traffic police launched a search but he could not be found till Thursday evening. His clothes and slippers were recovered from the ghat.

Rickshaws to cross VIP Road: Samir Jain, a resident of Poddar Vihar on VIP Road, stepped out with wife Akriti to visit a bank in Lake Town. The family had to hire a rickshaw just to cross the road.

“Waterlogging is common here and the residents’ association of our building has complained several times to the authorities but no action has been taken. The road in front of our building turns into a huge water body every monsoon. Rickshaw-pullers made a killing today. I had to shell out Rs 30 to one of them just to cross the road,” Jain said.