Only priests and volunteers were allowed inside the temple 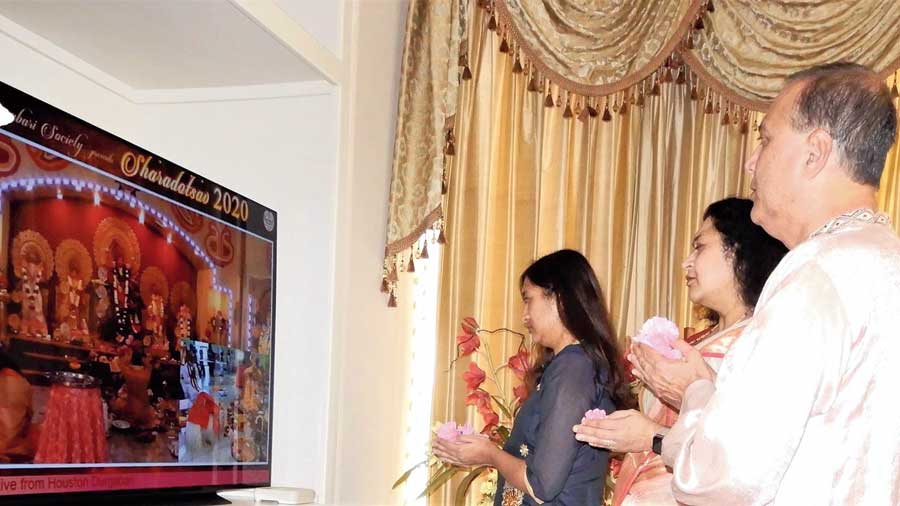 A Durga Puja in north America, billed as a meeting point of tens of thousands of Indians, has gone digital this year to combat the pandemic.

Houston Durgabari Puja, in its 20th year, allowed only priests and volunteers inside the temple. Even though Durga Puja has been celebrated in Houston since 1975 — it was celebrated for the first time in Durgabari in September 2000.

The entire puja and programmes were telecast on YouTube and Facebook this year. “Houston Durgabari is the nerve centre of our community — this puja is the epitome of our annual celebration. Every year, people in the Space City and rest of Texas and entire north America visit Durga Bari during the puja days,” Partha Sarathi Chatterjee, founding trustee of Durgabari and one of the key organisers of the puja, said on the phone from Houston.

“This year, in the wake of the pandemic we wanted to give a message. Stay home and stay safe. We will bring the festivities to your home.”

A fall/winter surge in Covid-19 numbers in the West has had doctors and public health experts worried. More than 84,000 people were diagnosed with Covid-19 across the US on Friday, according to a Reuters tally, a record one-day increase in infections during the pandemic.

The pandemic has forced several Durga Pujas abroad to go the virtual way this year.

At Durgabari, the pandemic did not affect the elaborate rituals. Every ritual — bodhon to anjali to sandhi puja — was followed to the minutest detail, said organisers.

Spread over six acres of land with a central temple, auditorium, a multi-purpose education facility and playgrounds, Houston Durgabari stands on the banks of a big lake where birds flock in droves under the setting sun.

Houston, home to Nasa’s Manned Spacecraft Centre, is known as the Space City.

A host of cultural programmes lined up for this year’s celebrations were broadcast on social media. To create the puja ambiance, the pandal was soaked in Las Vegas-style lighting.