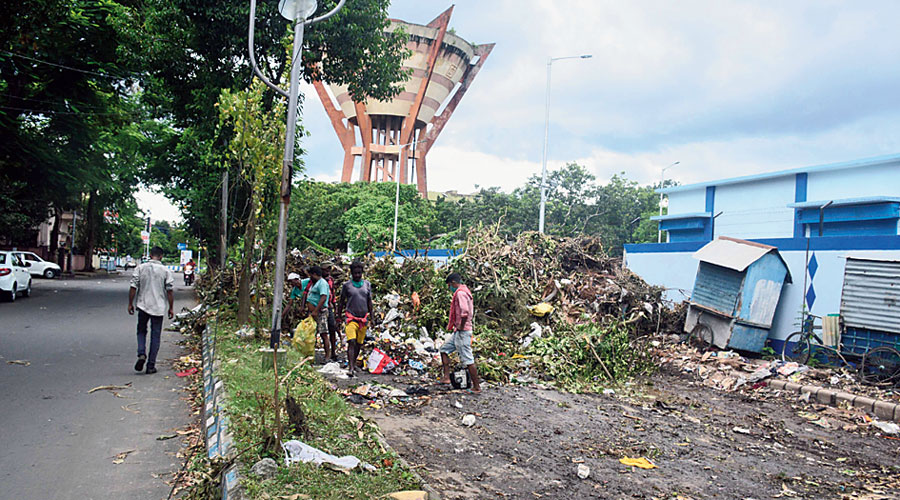 A lane blocked by fallen branches is dotted with craters on the road from Tank 13 to Anindita Island
Saradindu Chaudhury
Snehal Sengupta   |   Published 18.09.20, 04:25 PM

The road repairs department of the Bidhannagar Municipal Corporation has surveyed several areas where craters have formed in Salt Lake.

Urban development and municipal affairs minister Firhad Hakim on Tuesday said that he had received a request from Bidhannagar MLA Sujit Bose to release Rs 4 crore for repairing roads of the township. “I will look into this and we want to repair the roads before the Pujas,” Hakim said at the foundation stone laying ceremony of Rabindraangan and an old age home in EE Block.

The Telegraph had reported on August 28 how several roads had craters that spanned the entire lane. Ditches had been dug to replace water pipes in Sector III near KB KC blocks behind AMRI Hospitals but had not been levelled out.

An engineer of the corporation said they had conducted a detailed survey to chalk out a repair plan. Of the areas checked are a 200m long section of the road that connects Anindita Island to the Broadway in Sector III. A large ditch has formed in both flanks of the crossroad there and several accidents involving both two and four-wheelers have been reported in the past few weeks.

The civic body also wants to relay the entire surface of the blacktop from Tank 13 to Anindita Island that has large potholes. This stretch has a new water reservoir being built near the Income Tax colony.

A stretch of road that connects Tank 13 to the EZCC traffic island on Broadway has also fallen into disrepair and motorists often use the opposite flank to bypass the damaged stretch, creating traffic snarls.

A resident of IA Block said that it became extremely risky to negotiate this road. “The area resembles the surface of the moon. The other day the undercarriage of my car got scraped after it fell into a pothole at low speed. Now I make it a point to use the opposite lane knowing fully well that it is very risky. The problem is compounded at night,” said Santadip Choudhury, a techie who stays in IA Block.

In Sector II, the stretch leading to GD Block bus stand from the Tank 10 needs repair. “We conducted patchwork repairs there. Soon we will repair the other stretches,” said the engineer.

Tapas Chatterjee, the deputy mayor of the Bidhannagar Municipal Corporation who is also the mayoral council member in charge of roads, had said that work would take place in phases. “We hope to complete the repairs by Puja,” said Chatterjee, who is in hospital currently for Covid-19.

Pramila Chatterjee, a resident of DL Block, said that roads inside their block were cratered and needed immediate repairs. “Earlier we used to take pride in the roads of Salt Lake as they were in better shape than those in other parts of the city. But sadly the civic body has not been conducting regular repairs,” said Chatterjee.

A contractor who undertakes repair work in the township said they were yet to receive payment for earlier work. “Our payment has been erratic. Moreover, the civic body has not called for any fresh tenders for road repairs,” said the contractor, who did not wish to be named.
Chatterjee, on the other hand, said that the new tender process would soon be initiated.