Honeybees land on aircraft before passengers board

Water cannons used to drive away the swarms 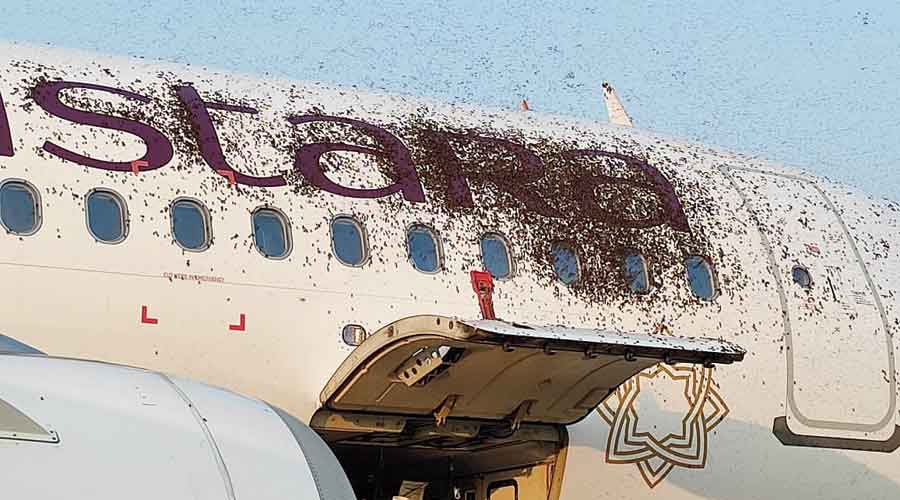 Honeybees descended on two Vistara aircraft on Sunday afternoon and Monday morning at the Calcutta airport, causing delays. Water cannons had to be used to drive away the swarms, officials said.

On both occasions, the bees were detected before passengers had boarded the flights, said Vistara officials. Both flights — around 150 passengers had booked seats on each — were operated with Airbus A320Neo aircraft.

On Sunday, Vistara staff detected the bees moments before passengers were to board the flight that was to leave for Delhi at 5pm.

“We detected the large swarm of bees on the front right side of the aircraft just before boarding was to start. The aircraft had been parked in a remote bay since the previous night. The Sunday afternoon flight to Delhi was its first operation of the day,” said a Vistara official.

Airport officials had to call fire tenders to drive away the bees with water cannons.

“Although no bee could enter the aircraft, the airline staff had to do fumigation as a safety measure,” said an airport official. This delayed the take-off by an hour.

Again, on Monday morning, a swarm of bees settled on a Port Blair-bound aircraft. “This time, too, the bees were detected before passengers boarded the flight. Again, fire tenders were called and a water cannon was used to drive the bees away,” said the official.

The Port Blair flight, too, was delayed by about an hour.

Bees on a window of one of the aircraft

The flights were parked in bays 25 and 26, which are away from the terminal, said an airport official.

“Our operations team has sprayed insecticide in the surrounding area and also conducted searches but could not find any beehive. We suspect the swarm of bees that had settled on the Vistara flight on Sunday afternoon returned the next morning,” said airport director Kaushik Bhattacharya.

He suspects the bees had come from outside the airport premises. “There are no big trees in the operational area…. The trees are all on the city side of the terminal,” he said.

An airport official said this was not the first time honeybees had disrupted flights at the Calcutta airport.

“In earlier instances, aircraft attached to aerobridges had faced the problem. Beehives had been spotted on pillars of some aerobridges,” said the official. “This was the first time bees settled on aircraft in remote bays.”

A few years back, a swarm of migrating bees had settled on a wing of a New York-bound Delta Airlines aircraft at the Pittsburgh airport, causing a 47-minute delay. A professional beekeeper was brought to gather the swarm settled on the Bombardier CRJ-700.