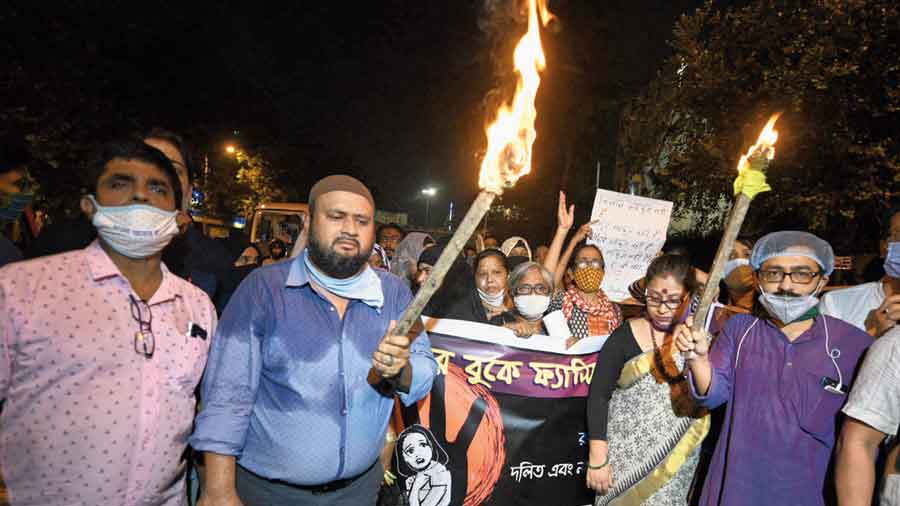 Protesters march from Park Circus to Gariahat on Saturday evening. The participants demanded justice for the Hathras victim, protested the “unjust acquittal of conspirators” in the Babri demolition and the “sense of hate prevailing in the country”.
Gautam Bose
Monalisa Chaudhuri, Snehal Sengupta   |   Calcutta   |   Published 04.10.20, 01:37 AM

Thousands of Calcuttans hit the streets on Saturday to protest what they termed “an assault on our daughter”.

A 19-year-old girl in Uttar Pradesh’s Hathras was brutalised. That and the way police there handled the matter triggered public rage and forced people to step out of their homes and protest, keeping the fear of the pandemic out of their way.

Three public rallies were organised across the city to protest the rape.

Hundreds of kilometres away in Uttar Pradesh, cops tried to stop the media and politicians from entering the village where the girl had been brutalised and killed and later cremated by the police in the absence of family members.

Although two of the three public rallies in Calcutta were organised by political parties — the Trinamul Congress and the Congress, along with Left Front allies — not all who participated were into party politics.

Many at the rallies had stepped out of home for the first time in months during the pandemic. Some were rally first-timers.

The rally led by chief minister Mamata Banerjee started from Birla Planetarium at 4pm and ended at the Gandhi statue. It saw the maximum turnout.

The joint rally by the Congress and the Left Front allies started from Moulali to Esplanade in the afternoon.

The third was a citizens’ rally at Park Circus. It saw a considerable turnout despite the rain and the pandemic.

“People joined spontaneously. It was practically not possible to maintain distancing rules when so many people were on the road and marching. The matter is beyond any political agenda. Most of the participants were women,” an officer who was on duty at the chief minister’s rally said.

The picture was nothing like what Calcutta has seen in the past couple of months when most people stayed indoors for fear of contracting the coronavirus.

Sarathi Roy, a software engineer who has been working from home the past few months, was one of the participants who never walked in a public rally in the past. “If we do not raise our voice now, when will we?” Roy, who lives near Elgin Road, asked.

Around 4.15pm when the head of the rally approached Park Street, the tail was still near Rabindra Sadan.

The gathering later in the evening at Park Circus had people from various walks of life coming from far-off places in the city.

Pragya Roy Chowdhury, a third-year student of Sanskrit College and University, was with 14 of her friends. They took public transport to reach the venue.

“Even we are scared of the virus. But the oppression by the state that unfolded in Hathras did not let us stay at home. We cannot stay at home any more. We had to come,” Roy Chowdhury, a resident of Dum Dum Park, said.

One of her friends drew a parallel with the condition of the migrant labourers who were aware of the consequences of stepping out during the pandemic but had to travel kilometres for survival. “It has become a battle of survival… we all have to raise our voices together,” one of her friends said.

A primary schoolteacher from Rashbehari was in the gathering despite the rain in the evening. The fear of travelling in public transport did not deter her from joining. “I took a bus to reach the venue… I will again use public transport to return home,” the teacher who identified herself by her first name, Swapna, said. “The fear of Covid is in its place and that’s why I am wearing a mask. But this needs protest; so, I came.”

Senior officers in Lalbazar said the turnout on the roads was “more than expected”.

“So many people were on the roads irrespective of age and gender. Some were panting while walking… but they did not give up,” a traffic police officer said.

Sarthak Roy Choudhury, a teacher of Gokhale Memorial Girls College, said the horror of the Hathras incident has left him sickened to the core.

The nation should be in mourning as the social fabric has been torn to bits, he said. “The way the woman was brutalised makes me ashamed to be a part of the male gender.”

Choudhury chose to come to a gathering despite the pandemic because protesting is the only way out. “We can’t let our country become famous for its rape culture.... The situation of hate and division on the basis of caste must stop,” he said.

We have learnt nothing and nothing has changed, says Poushali Basak

Poushali Basak, a research scholar at the Tata Institute of Social Sciences in Mumbai, said she did not mind travelling in a crowded bus to reach Park Circus despite the pandemic.

“Women’s safety is an issue that has been widely advocated by our government but when it comes to ground reality we have the horror of the Hathras incident,” said Basak, who was at the protest with a friend.

The widespread civil rights violations in Uttar Pradesh and the brutality of the rape cannot let anyone sit at home and contemplate. “We need to be out here on the streets and cry ourselves hoarse,” she said.

This is far more scary than the pandemic, says Anam Zafar

Anam Zafar, a third year student at Hazra Law College, fought with her parents, who were against her going to a protest amid the pandemic, to attend Saturday’s rally.

Zafar said that she firmly told her parents she needed to be out on the streets to join the protest, after which they relented.

“They were worried about me contracting the coronavirus. I told them that the situation in our country is far more scary than testing positive for Covid-19 and we must do something about it,” said Zafar who stays in Park Circus.

Rangoli Chatterjee, who works for a multinational company in Salt Lake Sector V, took a few hours leave to be at the protest march.

The way the authorities in Uttar Pradesh were trying to intimidate the woman’s family was both very disturbing and pointed to the fact that they wanted to keep things under wraps, she said.

“The woman is a Dalit — a class that has been downtrodden for a long time. However, the police and the authorities in Uttar Pradesh instead of helping them are trying to gag them. This cannot go on,” said Chatterjee.