The problem still persists in some stretches but I can vouch that the stubble-burning issue has been largely controlled: Debashis Sen 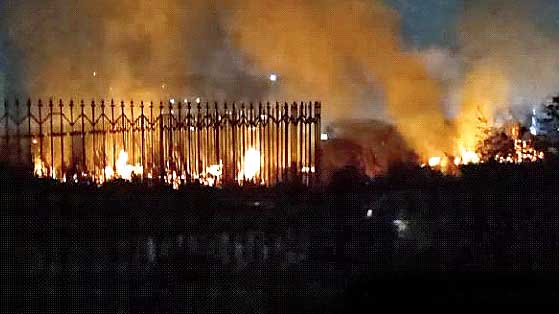 NGT directs Alapan Bandopadhyay, to look into the issue of burning of crop residue
Sourced by the correspondent
Jayanta Basu   |   Salt Lake   |   Published 12.03.21, 12:31 AM

The principal bench of the National Green Tribunal (NGT) has directed chief secretary of West Bengal, Alapan Bandopadhyay, to look into the issue of burning of crop residue in various parts of West Bengal, including New Town Action Area II, in coordination with the departments concerned.

The order was passed in the first week of March by the bench comprising Justice Adarsh Kumar Goel, chairperson of NGT; Justice Sheo Kumar Singh and Nagin Nanda, expert member; in response to a petition filed by environment activist Subhas Datta alleging acute air pollution in the area due to stubble burning.

“…There can be no dispute that sources of air pollution need to be controlled. What is required is implementation of law by the concerned Executive Authorities. Accordingly, the Chief Secretary, West Bengal may look into the matter in coordination with the concerned Departments and take appropriate action in accordance with law,” reads the NGT order, a copy of which is with The Telegraph Salt Lake.

“Though the problem still persists in some stretches but I can vouch that the stubble-burning issue has been largely controlled,” said Debashis Sen, chairman and managing director of Hidco, on Wednesday. Sen admitted that earlier the problem was rampant.

Kalyan Rudra, the chairman of the state Pollution Control Board (PCB), the headquarters of which is located in Salt Lake, also claimed that whenever the green board got a complaint about stubble burning, it immediately referred it to the police. However, the state PCB has no record of police action on the issue.

“It’s a matter of concern and shock that the unbearable air pollution level in our city is accelerated due to such stubble burning,” mentioned Datta, while pointing out that burning of crop residues also happened at the land earmarked for the Calcutta High Court complex in New Town.

Stubble burning in vacant plots in New Town has been adding high level of toxic particulate and gaseous pollutants over and above the already deteriorating air in the area, mainly triggered by large scale construction.

Interestingly, the air pollution sensor set up by IIT Delhi under a NASA pilot programme, has found “unhealthy” air quality in New Town area, even on Wednesday noon, long exposure to which can impact the lungs of common men. PM 2.5, the ultrafine particulate, is found mostly responsible for the pollution in New Town. PM 2.5 can enter deep crevices of the respiratory system and trigger a range of diseases.