After the way 2020 turned out to be, no crystal gazer would dare to lay a wager on predictions for the coming year. Here are some of the things that are set to come our way this year provided life does not get blindsided, yet again 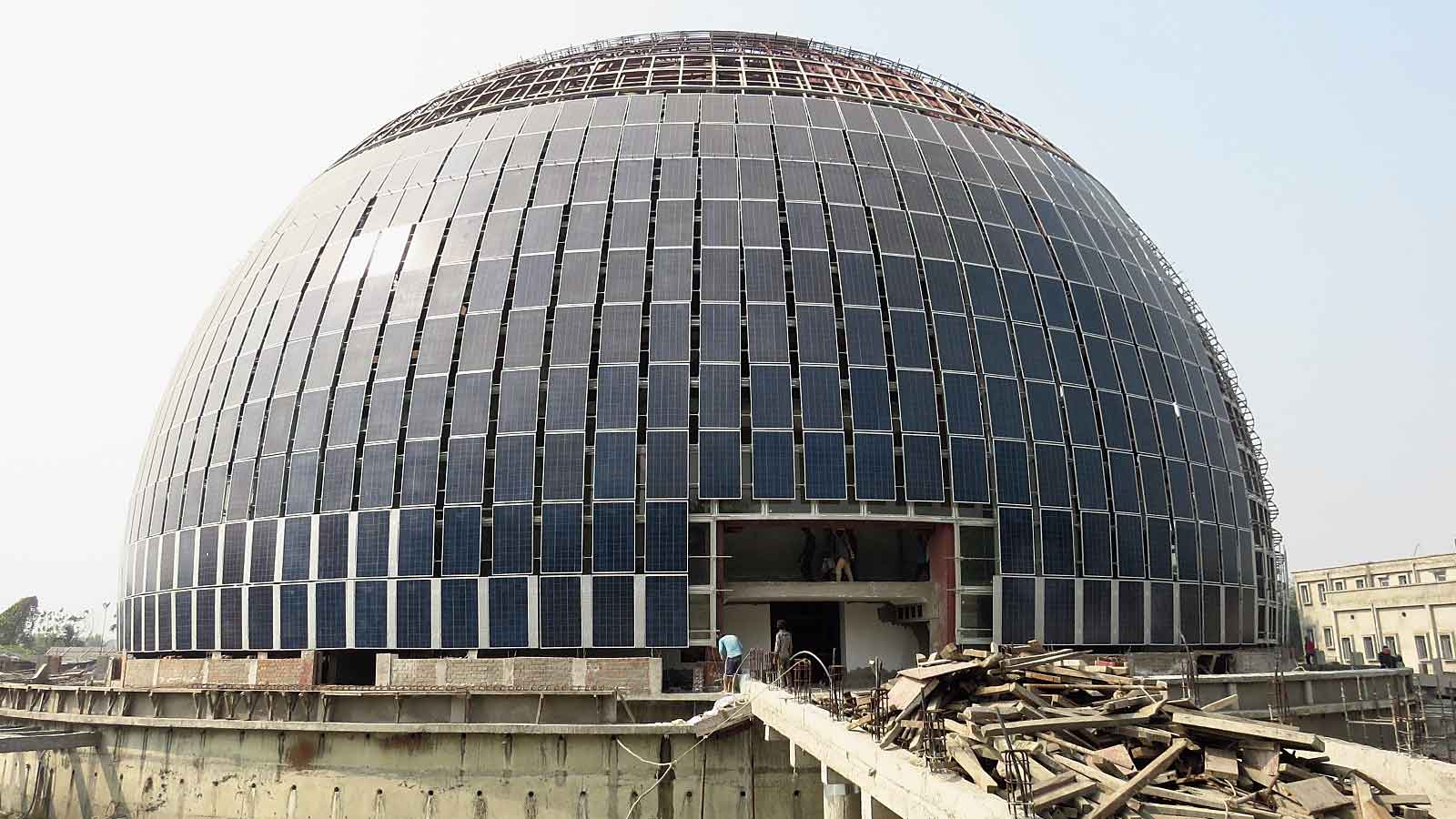 A dome-shaped exhibition hall-cum-auditorium that has been under construction since February 2017 over 3.3acres near gate 6, next to the herbal garden, in Eco Park has “about 10 per cent work left”, according to sources. Fitted with solar panels on the outside, the dome is expected to generate 180 KW of electricity for itself. It was supposed to have been complete last year itself, but got delayed by the lockdown.

Space was allocated here after the Renewable Energy Park opposite Science City on the Bypass had to make way for the Airport-New Garia Metro.

There will be provisions for a laser show, an overhead aquarium and a food court in the upper levels. A viewing gallery will be there at a height of about 16m from the ground, offering visitors a panoramic view of the park and the lake.

A spiral ramp would connect the three levels besides two lifts with 15-person capacity each. The project is helmed by the power department and work is expected to complete by the end of 2021. 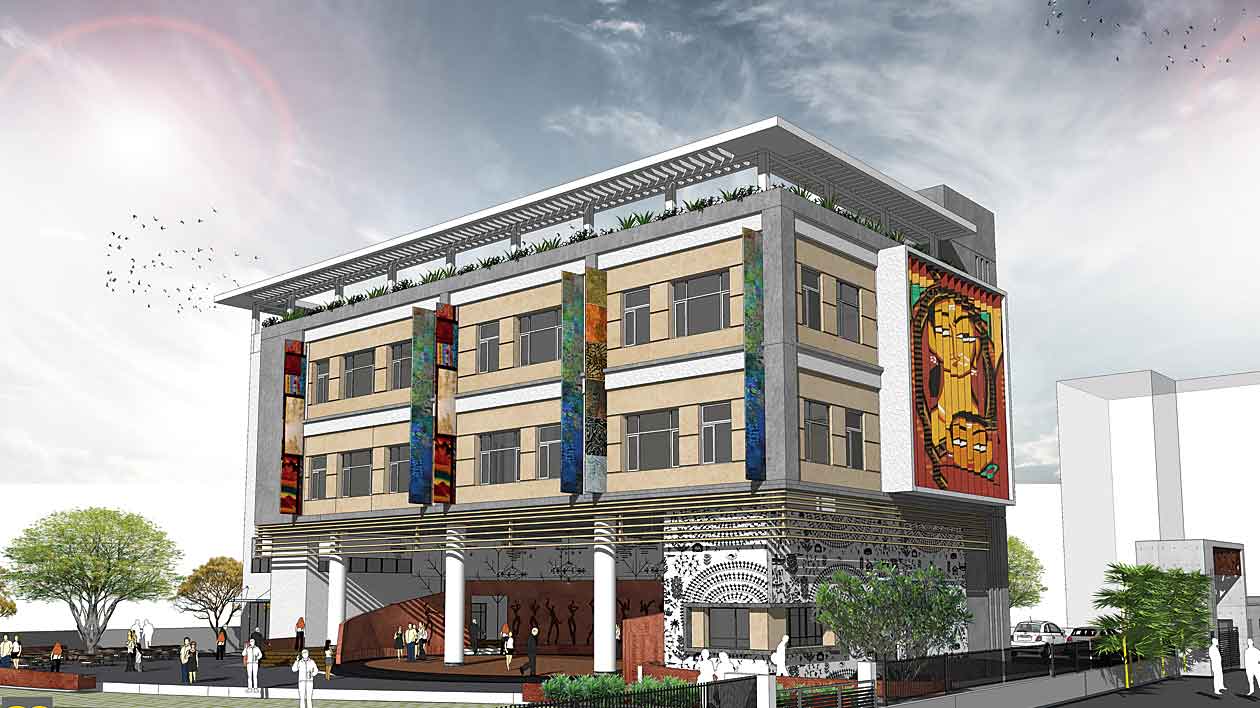 For long, New Town residents have sensed the lack of a public space to hold community programmes in. That lack will be redressed in 2021. Two community centres are being built by the New Town Kolkata Development Authority (NKDA). These would be three-storeyed structures with the first and second floors to be let out as utility banquet halls for social functions like wedding and annaprasan. These floors will be equipped with toilet, pantry, and a small room for the baby or the bride to take rest in.

The ground floor, about 20ft high, is spread across 7,000sq ft. It opens out to a 10,000sq ft garden in front. It is ideally suited for big gatherings like Durga puja or for organising cultural programmes where the audience can be seated in the lawn.

Even the roof can be used for banquets. The elevator goes up directly to the roof.

The first of the two community centres is coming up between Unbox Park and Fairfield by Marriott, on the Major Arterial Road, in Action Area 1. Designed by the Salt Lake-based Ayan Sen Architects Urban Designers and Planners, it is expected to be ready by June.

The second community centre, which started being built about three months after the first, is coming up in Action Area IIB on Street 651, near Hiland Woods and Akankha.

Both will be owned and operated by NKDA. 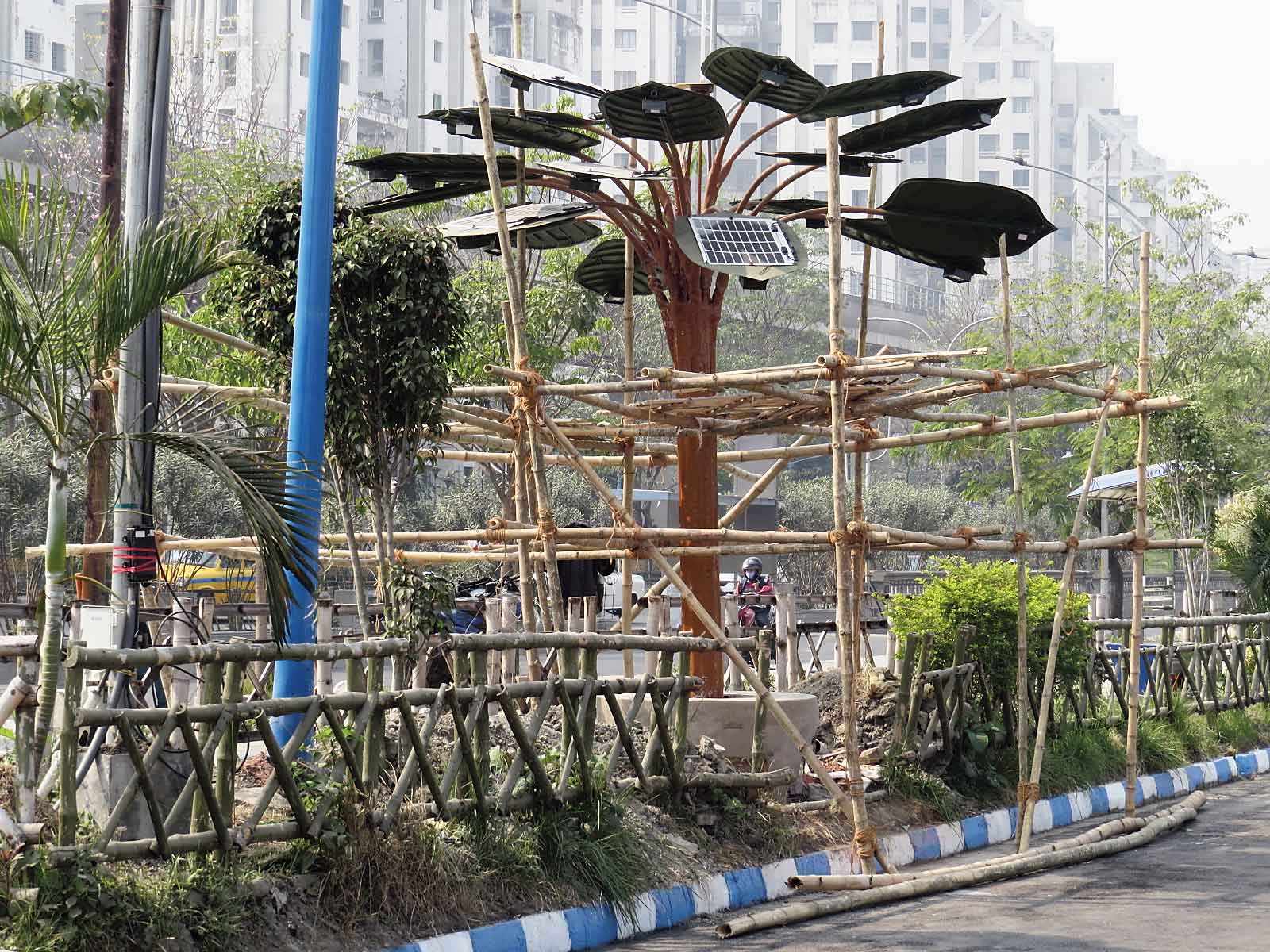 A 400m long road in front of the New Town Mela Ground, parallel to the Major Arterial Road, will boast a host of smart features as a showcase for a convergence of various interventions being done under the Smart City project in the township.

Two solar trees, styled after palm trees but with solar panels as leaves, have come up. LED lights have been installed, a plastic road has been laid using waste plastic fibre with bituminous mixture and a barrier-free cycle track has been paved along the sidewalk. A ramp helps wheelchairs slide down to the carriageway and reach the Mela Ground pavement. Three smart benches have been installed with solar panel on their roofs and sensors on the bench. The solar lights get turned on and off automatically depending on when people sit on the benches or get up. The solar panel provides shade to the bench and power to the light. One can even charge one’s phone using the USB ports in each bench.

A mosquito magnet has been placed to protect people resting on the benches from the bite of the winged pests. The device releases a mix of propane and carbon dioxide at fixed intervals to attract female mosquitoes and trap them. Female mosquitoes get drawn by the smell of carbon dioxide and head towards the device, which has a concealed net attachment. Once they fall inside the net attachment, they die.

An electric vehicle charger is also supposed to come up on the road. It will be lined with aesthetically pleasing balustrade. 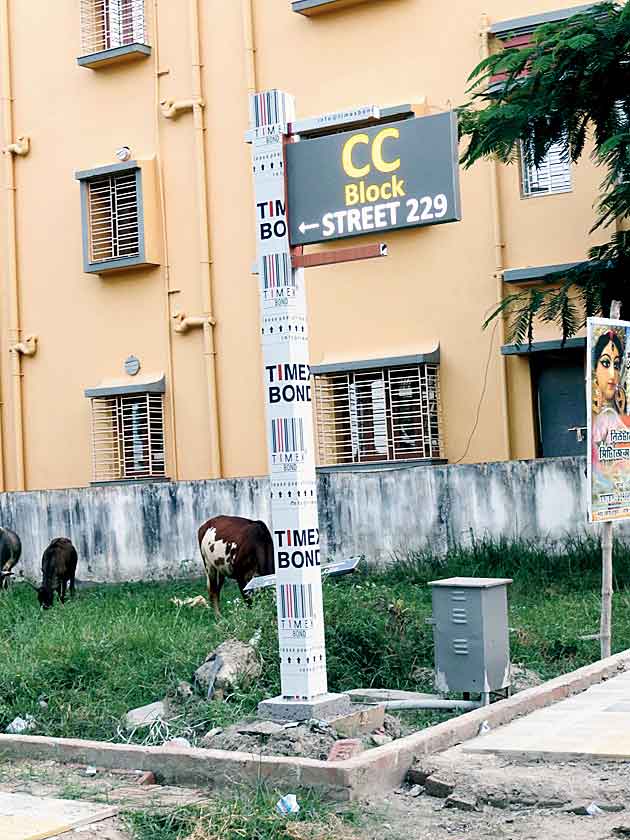 Over the past few months, street signs have been coming up in blocks across Action Area 1B and C. They are backlit and hence easy to spot at night as well.

But these street signs, about 6.5ft high, will eventually do much more than indicate the block and street number. Each post will have a closed-circuit TV camera to keep a watch on the surroundings. There will also be a pinhole camera and a help button placed above child height. These will be connected to the control room, which one can call and talk to in emergency. The control room will take another three months or so to start functioning.

About 600 will be installed in densely inhabited areas, with half already in place. The authorities will monitor usage for a couple of years before setting up more in the rest of New Town. 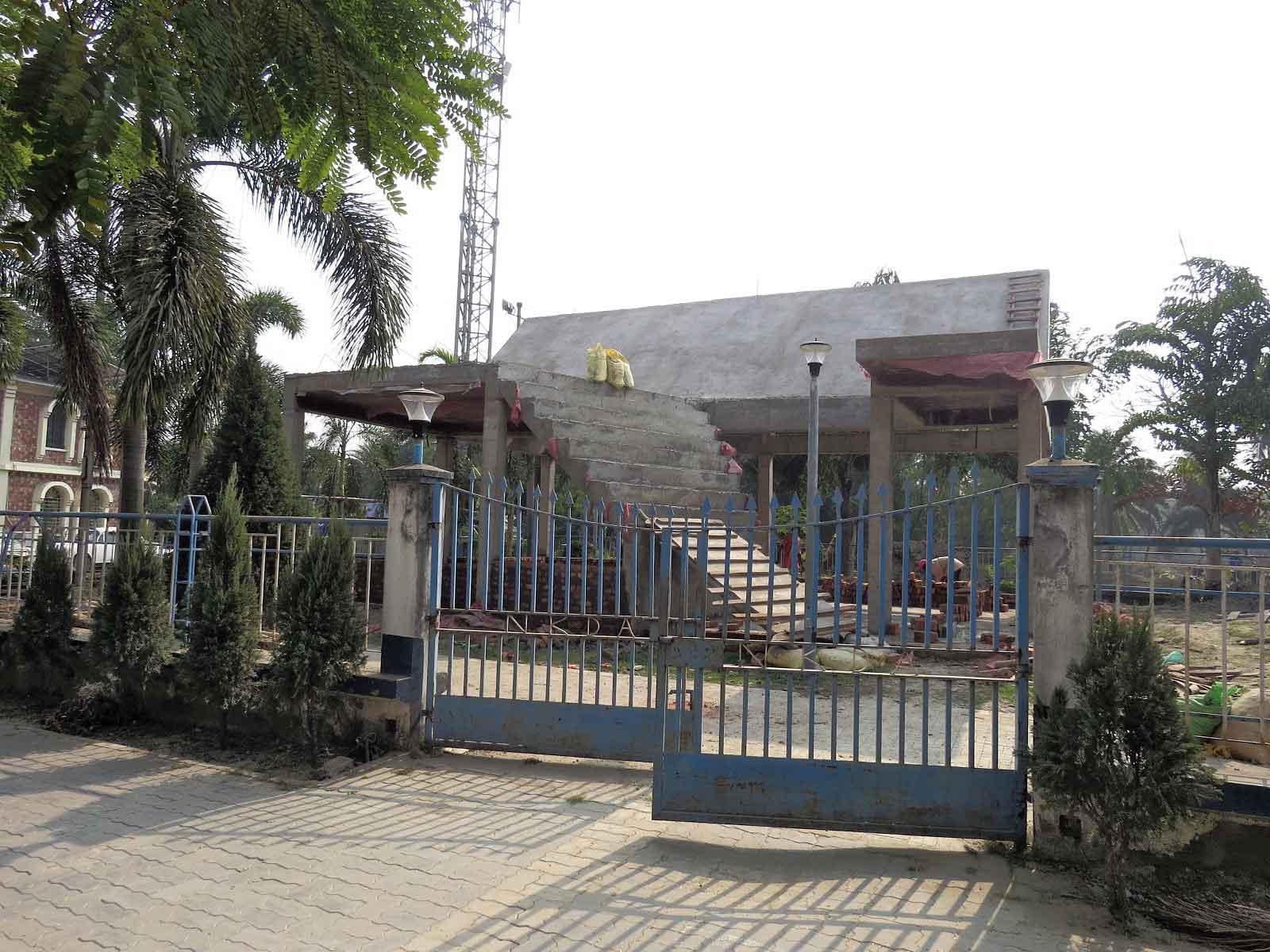 Remote working spaces are coming up in three places in New Town where people can take a break from the monotony of being within the four walls at home both during and after office hours. Charges will be according to the time spent.

Separated seats will be provided with laptop charging ports and wi-fi connection. There will be toilets and a coffee vending machine as well, with provision to buy light snacks. Some light reading material will be there too for those wanting to bide time. Seating arrangements will be there on the terrace too.

Designed by Abin Design Studio, the first of three cocoons is nearing completion next to NKDA Bhavan. The authorities hope to get it ready by March. It will take some more time to get it operational as it will be run by a franchisee.

Two more will follow on the same side of the road, one next to Sankalpa 4 and another across the MAR from the statue of Christ the Redeemer in Eco Park.

To detect water loss, meters will be installed by mid-2021 across New Town’s distribution pipeline from the water treatment plant to the overhead tanks and booster stations. The water quality, flow and pressure of the water supply will be monitored at intervals. While it is normal to expect a gradual dip in pressure with increasing distance from the source, if there is a sudden dip it can be attributed to leakage in the section. A dip in chlorine content can also similarly indicate inflow of pollutants. The smart meters will collect data from the meter output and submit in the central computer, which will analyse and check for deviations in readings. This will lead to faster rectification measures. 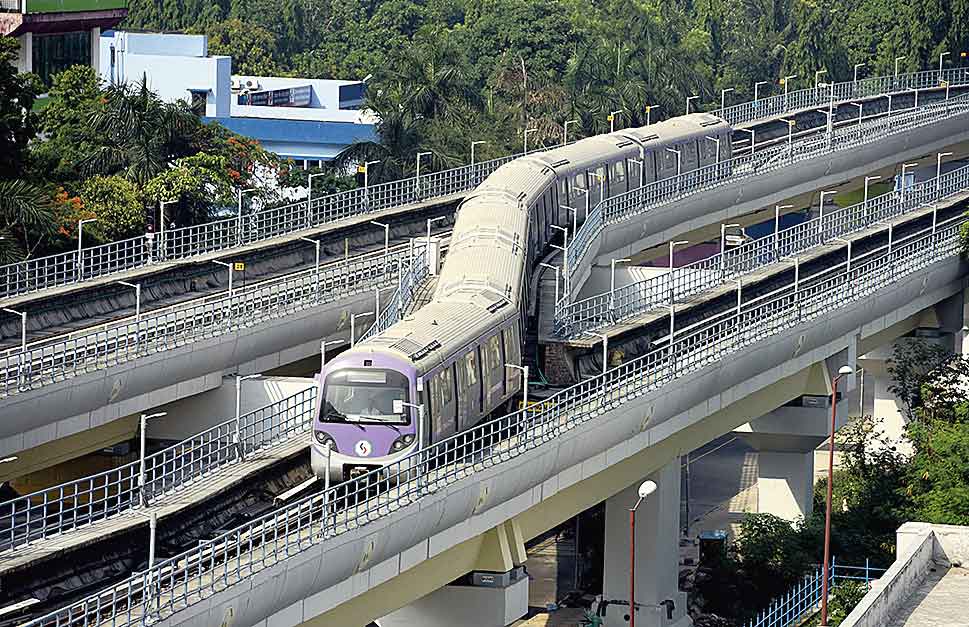 Commercial operations of Metro at the Sealdah station are expected to start by the later half of 2021 and trains will run from Sector V to Sealdah.

Now commuters are able to travel till only Phoolbagan from Salt Lake and Sector V and the line is largely used for joy rides. Most trains that travel from Sector V to Phoolbagan have a handful of passengers.

With app cycles launched in 2020 becoming popular, residents of and visitors to New Town will now get to experience the comfort of battery-operated cycles.

Chartered Bike, the company that runs the current app-based cycle service, is preparing to roll out 400 e-cycles in the coming months. These are cycle that run on batteries that can be recharged like mobile phones. In case the charge runs out midway through a ride, the rider can pedal the remaining distance. Their top speed is 25km per hour and riders do not need a licence to ride it. The e-cycles can be parked and picked up from docking stations around New Town. Six such stations are already up and 15 more will come up in 2021, including one at the Coffee House.

A fast charging station should come up early this year next to the convention centre. Called Powerbunk, the station would charge 25 electric four-wheelers simultaneously. This is being touted as the largest public station of its kind in the country. The project is being undertaken by a group called Shuchi, that received the letter of intent from Hidco in September 2020. 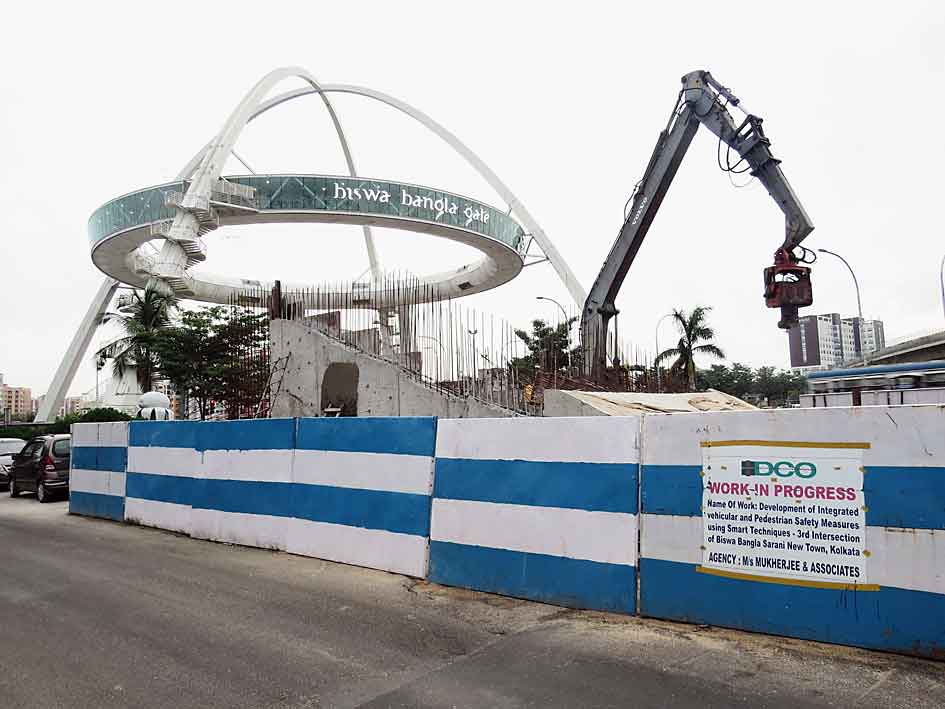 A network of underpasses equipped with escalators is being constructed in New Town at the Rabindra Tirtha crossing, below the Biswa Bangla Gate, to enable pedestrians to cross the six-lane Major Arterial Road safely that cuts through the township. All of them will be functional in 2021. All four underpasses will have escalators moving in both directions. 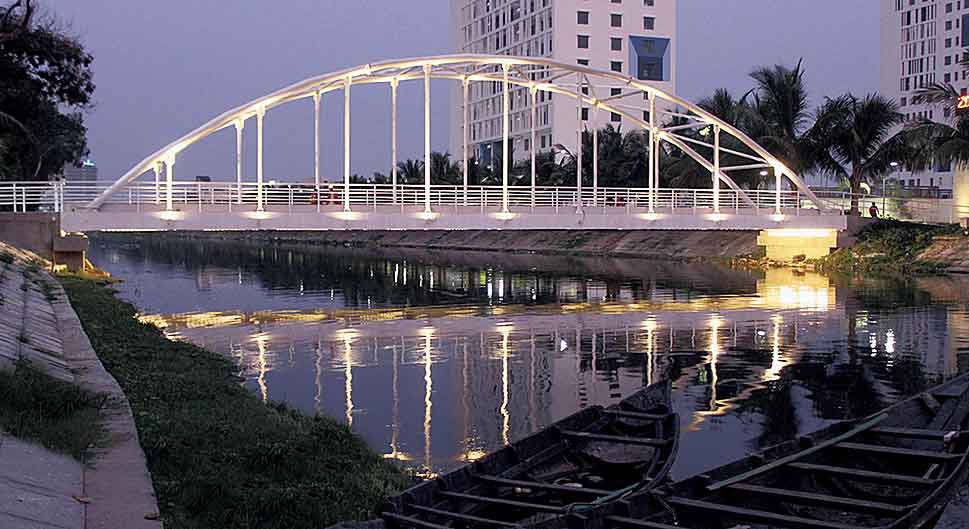 A long-standing demand of residents of Gauranga Nagar for a direct connection to New Town is set to be fulfiled this year with the construction of a bridge over Bagjola Canal near Sunrise Greens. This would come up at a distance of 1.5km across the MAR from the Biswa Bangla Convention Centre. It will be 45m long and will be modelled on the existing bridge on the canal next to the convention centre. It can support small vehicles but not goods vehicles.

Currently people use a hanging bamboo bridge to cross the canal. 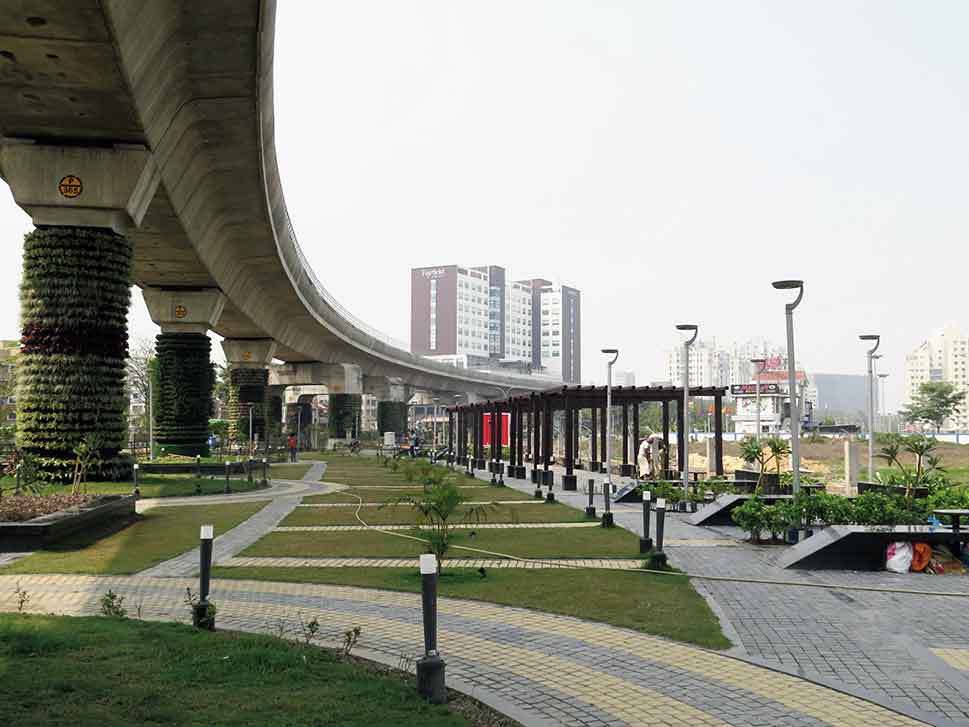 The open-air space under the Biswa Bangla Gate ahead of New Town Mela Ground will have free wi-fi and laptop charging points. With manicured lawns all around and vertical gardens on the Airport-New Garia Metro pillars, the idea is to marry technology with nature. 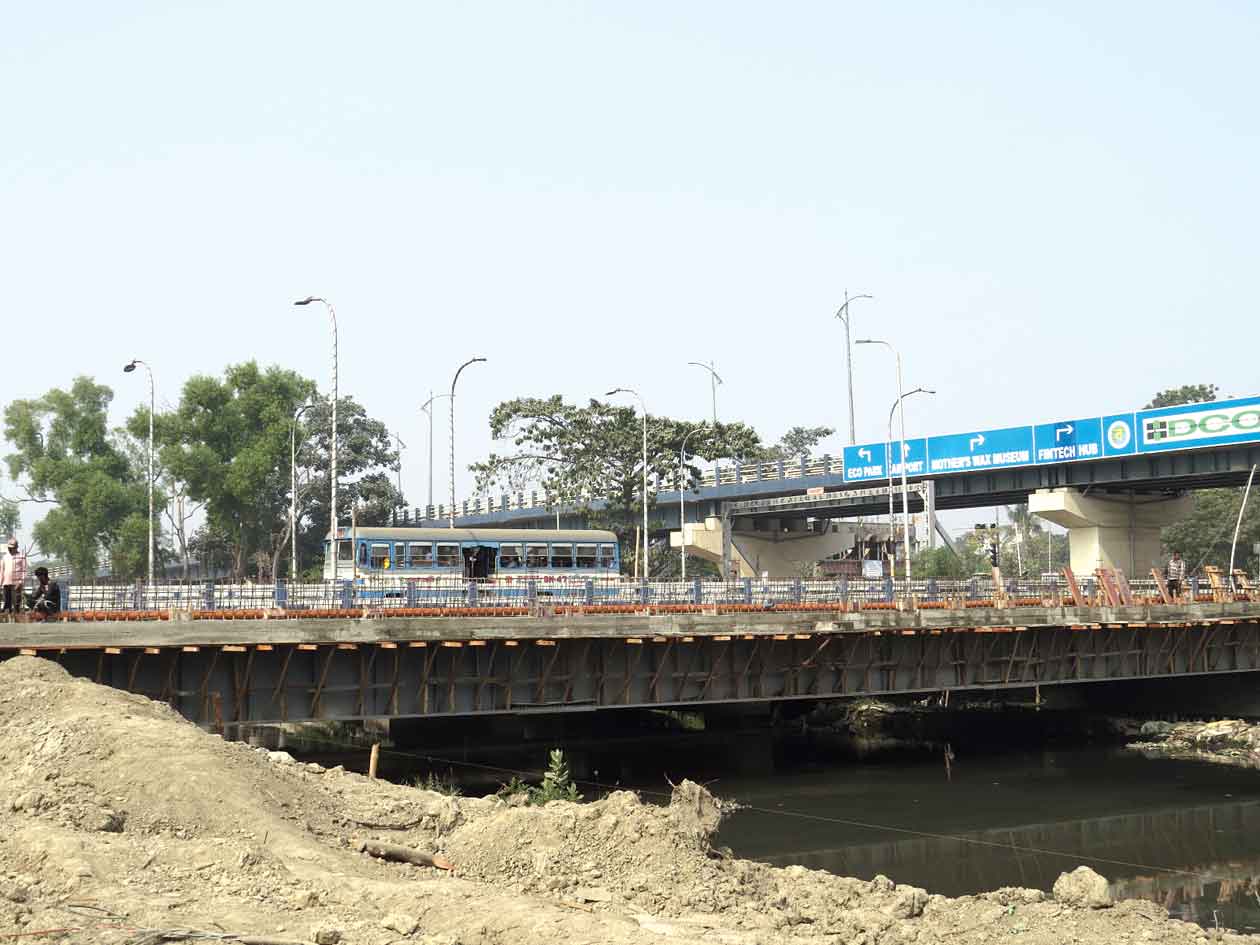 Bridge for service road across canal

A two-lane bridge is being constructed over Bagjola Canal to allow the service road along the MAR to continue uninterrupted. While the side adjacent to the Biswa Bangla Convention Centre is almost ready, the other side will also be built.

The parking plaza in AQ Block in Sector V is almost ready. The lot is set on a one-acre plot and the G+7 plaza has come up behind Technopolis opposite the Positional Astronomy Centre in Sector V. The plaza can accommodate 648 cars and will have pre-booking facility.

The ground floor will also house a food court where stalls will be let out to hawkers who now operate from the pavements of Sector V. 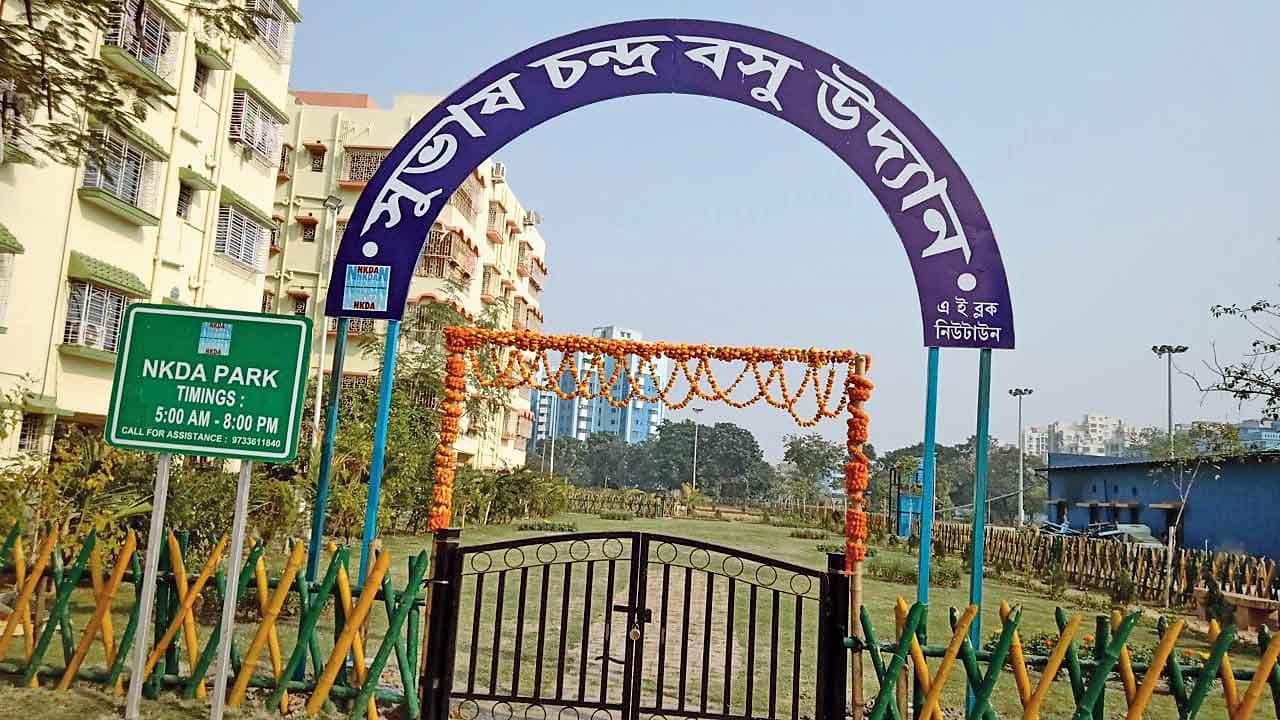 A park will be opened on January 23 in front of New Town Business Club. This will be in commemoration of the birth anniversary of Netaji Subhas Chandra Bose. The park will present a panorama of Bose’s life through his political struggle, during his Azad Hind Fauj days and through the films that have saluted him. 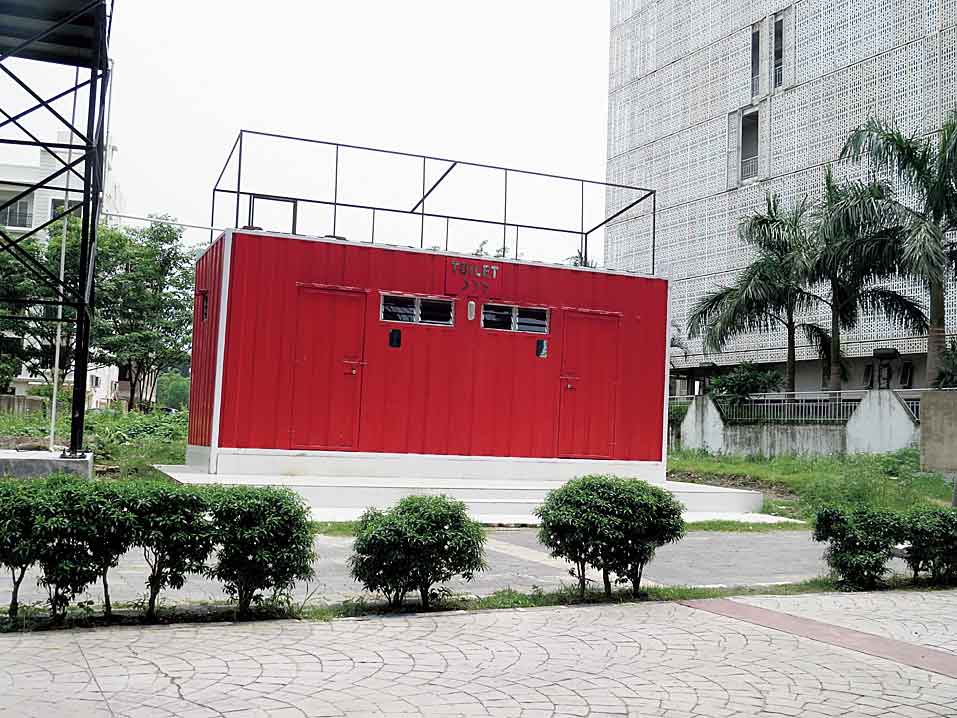 Abandoned containers at docks which had carried shipments but have no further use have been picked up and are being refashioned as toilets across New Town. They will be thrown open to public in course of the year.

All blocks of Salt Lake will start getting water from the New Town water treatment plant.

Now 4MGD of water is being flown in from the New Town water treatment plant and is being supplied to wards 29 to 34 and 37 in Salt Lake.

Apart from these the water is also being supplied to wards 22, 25, 26 that comprise areas falling under the erstwhile Rajarhat Gopalpur Municipality.

Two new reservoirs have been built next to Tank 13. The second one has a capacity of four million gallons. Two other overhead reservoirs are there in Rajarhat’s ward 26. A fourth underground reservoir, capable of storing three million gallons, has come up beside Tank 5. Treated water from New Town can be stored in the new reservoirs, which can pipe 11 million gallons to Salt Lake for now. The pipe laying work has been delayed due to the pandemic and once all the pipes are laid all 41 wards will receive the treated water from the New Town plant.

The facility will overlook the Sector V waterbodies and will have a banquet hall, seminar room and games room for recreation. The idea is to provide a place to host meetings and community programmes in the tech township.