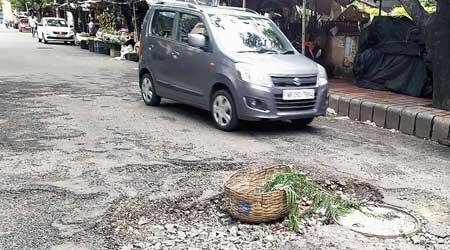 Giant potholes have formed on roads across all three sectors of Salt Lake.

Residents and regular commuters said the potholes had formed before the onset of the monsoon but they have become wider and deeper following the recent spells of downpour.

According to the residents this newspaper spoke to, the Bidhannagar Municipal Corporation has not even done what it usually does — a basic repair work.

Some said no major repair work had been carried out by the civic body over the past couple of years.

“We are not getting a stretch of dry weather to carry out repairs. We will do the needful as soon as we get a week of dry weather,” said an official in the road repairs and upkeep department of the civic body.

At least two bikers met with accidents recently after their two-wheelers skidded while they tried to negotiate craters.

Among the worst-affected stretches is a 1-km road in front of the Geographical Survey of India headquarters.

“Some of the potholes are so deep that traffic police had to place guardrails to ensure that motorists do not run into them,” said Bikash Choudhary, a resident of DL Block.

The situation is similar in front of the administrative building in DJ Block, where the office of the sub-divisional officer of Bidhannagar is located.

“We have notified the corporation but no repairs have been carried out yet,” said a resident of the neighbouring BJ Block.

The stretch that leads to Tank Number 8 from Karunamoyee, too, is in a bad shape.