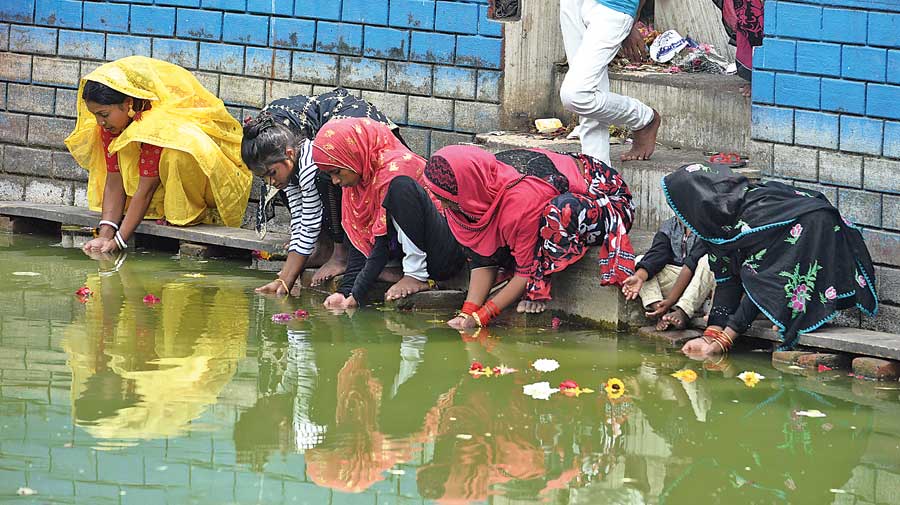 A BJP rally kept raising high-pitched “Jai Shri Ram” cries as it marched along the Baruipur-Canning Road in South 24-Parganas on Friday afternoon.

Slogans in support of the incumbent regime in Delhi were belted thick and fast and scorn was heaped on “infiltrators and termites”. It was around 12.30pm and the road was not busy. But some cars were stalled by the rally.

One of them was headed to a shrine dedicated to a Muslim saint, 35km from the heart of Calcutta and two stops before Canning, the gateway to the Sunderbans. All the occupants of the car were Hindus.

Debi Majumder (left) and Umme Habiba Laskar at the Ghutiari Sharif shrine on March 26. Majumder is a Lake Market resident. Laskar is an ayah employed by a neighbour of Majumder. The picture was taken minutes after the two dipped their palms into the pond together
Gautam Bose

“I am going to Ghutiari Sharif for the first time. I have heard that if you pray sincerely, Ghazi baba answers your prayers,” said Suparna Dutta, 22, part of the group from Garia.

It is also a testament to the secular character of the popular devotional culture of Bengal at a time religious polarisation is the dominant narrative everywhere from political rallies to election manifestos.

Legends and folklore in Bengal are often a part of everyday life, transcending barriers of religion and caste. When this reporter visited the shrine on Friday, scores of women with sindoor-smeared foreheads were seen dipping their palms into a pond in the shrine compound, praying silently to have their wishes (manat) fulfilled.

The shrine embodied the deep-rooted syncretism in Bengal’s culture, something that social scientists said would pose a formidable challenge to any political party seeking to polarise voters.

That syncretism was perhaps best represented by an image of two women — Debi Majumder and Umme Habiba Laskar — dipping their palms together in the pond.

Majumder, a first-timer at Ghutiari Sharif, had come from her home in Lake Market. She came to know of the place from Laskar, an ayah who looks after one of Majumder’s neighbours. Laskar is a resident of Champahati, another suburb not far from Ghutiari Sharif, and has been there several times.

They had boarded a train from Ballygunge to reach the Ghutiari Sharif station on Friday. The shrine is a less than five-minute walk from the station. Around 1.30pm on Friday, the two dipped their palms into the pond together.

“I prayed at the mazaar and then made my wish at the pond. I have skipped breakfast, in keeping with the ritual,” said Majumder. Many visitors fast till they pray at the mazaar.

Suparna Naskar, who lives in Baruipur, had accompanied a Muslim friend who had come with her newborn. “She had wished for a child. Today, we have come to thank Ghazi baba for granting the wish,” said Naskar.

The shrine is a five-minute walk from the Ghutiari Sharif railway station in the Sealdah-Canning suburban section. The narrow road is dotted with shops. The resting place of the pir is at the centre of the compound. The top of the shrine has a mosaic dome with four towers.

Legend has it that the area, then part of the Sunderbans, was hit by a severe drought four centuries ago. Pir Ghazi Mubarak Ali is said to have brought rainfall to the area. He is also said to have cured a Hindu king, Madan Roy, from a severe bout of illness, after which Roy gifted him swathes of land. The mazaar stands on that land.

“Baba’s spirit still endures, taking care of this place. He did not discriminate between people. We have maintained that tradition. Around one-third of my customers are Hindus,” said Salim Dewan, 65, who owns a store selling incense sticks, flowers, chadars and other objects offered to the pir’s resting place. Dewan is a common title given to the future generations of the pir, some of whom are also part of the managing committee of the shrine.

“Many such mazaars and dargahs in Bengal are entrenched in a syncretic culture. The devotees come from all faiths, light incense sticks and offer sinni (a sweet concoction of milk, flour, bananas, raisins and other fruits, usually made during pujas in Bengali homes) and other homely food to the presiding saint,” said Epsita Halder, who teaches comparative literature at Jadavpur University and has researched on the scriptural understanding and popular devotionalism of vernacular Islam in Bengal.

“In medieval Bengal, many Islamic preachers became popular among the common people because they spoke in a simple language that everyone could connect with. They were not heavy on scriptural understanding of a religion but talked about devotion as a way of life,” Halder said.

Ghutiari Sharif falls under Canning West Assembly seat, won by Trinamul’s Shyamal Mondal in 2016. This time, the ruling party has fielded Paresh Ram Das. His main contender is Arnab Roy of the BJP.

Roy switched sides from the TMC to the saffron camp recently and his candidature has triggered protests from local BJP workers, like at so many other places of the state.

The influence of the shrine goes far beyond one constituency.

Ghutiari Sharif hosts two major fairs in a year. One is in the first week of August, commemorating the death anniversary of the pir. The other is in June, which coincides with the famous Ambubachi Mela at the Kamakhya temple in Assam. According to the local legend, King Madan Roy, a regular at the Kamakhya temple during the fair, started a similar fair near his home after being impressed by the pir.

Special trains are run during the fairs and lakhs of people, Hindus and Muslims, throng the shrine, apart from tens of thousands every week.

Those at the helm of the shrine said they kept off politics.

“We have always practised an inclusive culture and will continue doing so, irrespective of which party comes to power,” said Siraj Dewan, caretaker of the managing committee of the shrine.

Political commentator Maidul Islam said the politics of polarisation has yielded dividends in the urban middle class but suburban and rural Bengal was a different ballgame.

“The urban middle class is divided into the conservative and the liberal sections. The conservatives have already sided with the saffron brigade. There is a deep churning in a large section of the liberals. Many of them are still undecided among the Left and Trinamul. But the syncretic culture of rural and suburban Bengal is so deep-rooted that it will not be erased in the course of one election,” he said.

Ghutiari Sharif is not far for the Sunderbans, the land of another syncretic legend, Bon Bibi, the protector of humans and the forest, worshipped by Hindus and Muslims alike.

“All across the Sunderbans, rituals to Bon Bibi are performed by Hindus as well as Muslims. I think it is a wonderful kind of syncretism that you see there. In popular culture, in Bengal, it is incredibly mixed. These traditions, they are impossible to pick apart and say this is Hindu and this is Muslim. I think that’s what makes the popular culture of Bengal so vibrant and so interesting,” author Amitav Ghosh, who had introduced Bon Bibi to the world, said of the legend while speaking on the occasion of a literary meet in Calcutta in February.