The service, which began over a month ago at the Gurdwara Behala, reached the Sola Ana Masjid in Ekbalpore and Sacred Heart Church in Esplanade over a fortnight ago 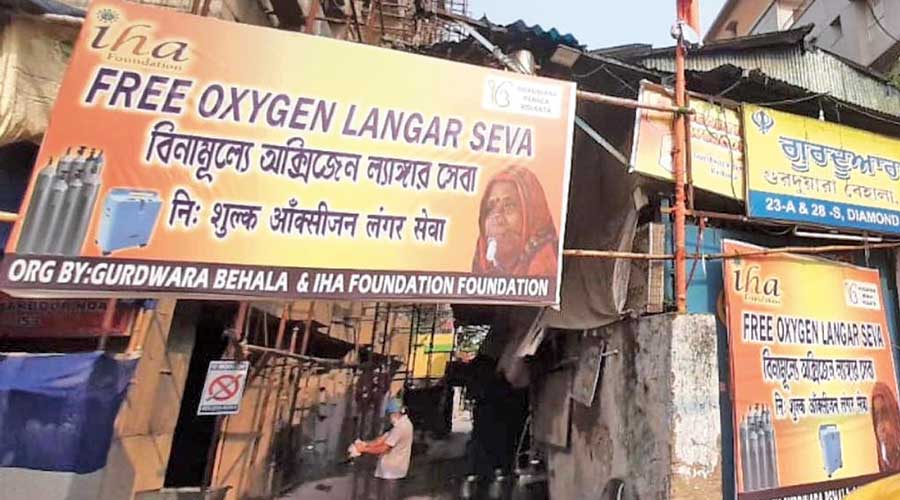 The entrance to Gurdwara Behala, where the free oxygen supply service started over a month ago.
Telegraph picture
Debraj Mitra   |   Calcutta   |   Published 13.06.21, 03:01 AM

A Hindu woman went to a mosque, a nun to a gurdwara and a Muslim woman to a church.

Gasping for breath, all three had headed to oxygen camps running at places of worship near their homes.

At a time the politics of hate is seeking to divide people, a drive to save lives in the city is breaching the barriers of faith. The free oxygen service, which began over a month ago at the Gurdwara Behala, reached the Sola Ana Masjid in Ekbalpore and Sacred Heart Church in Esplanade over a fortnight ago.

Sola Ana Masjid in Ekbalpore where the organisers from the gurdwara started a similar camp a fortnight ago.
Telegraph picture

Every day, scores of people in need of oxygen — whether Covid-positive or untested — visit the three camps, an initiative of the IHA Foundation, a philanthropic organisation. Many with patients back home get their oxygen cylinders refilled at the gurdwara camp.

In Ekbalpore, an area carved out of the mosque compound hosts the oxygen camp. It has a separate entrance. The mosque, which stands beside a burial ground, is a stone’s throw from the Ekbalpore police station.

At the Sacred Heart Church, set opposite the Tipu Sultan Masjid on Lenin Sarani, the camp occupies a part of the porch.

Sacred Heart Church on Lenin Sarani, where the same organisers started an oxygen camp a fortnight ago.
Telegraph picture

Both these centres started on May 28. The camp on the ground floor of the Gurdwara Behala on Diamond Harbour Road completed a month on Wednesday.

“We are serving all, irrespective of caste, creed or colour. Most of the people who come are needy,” said Father Franklin Menezes, who supervises the camp at the church.

Anyone in need of oxygen can visit the camps, where a patient’s vital parameters are checked by a team of paramedics in PPE kits.

Tapati Ghosh, 68, had almost completed her mandatory period of home isolation after testing Covid-positive when she began having breathing problems. Her oxygen level dipped and her family contacted a doctor who suggested immediate oxygen support.

“We could not arrange for a cylinder. A neighbour told us about the oxygen camp at the mosque. The volunteers at the camp were very helpful and efficient,” said Swastika Ghosh, Tapati’s daughter-in-law.

The family lives in Mominpore off Diamond Harbour Road. Tapati went to the mosque for three consecutive days from June 2 to 4. She is much better now, Swastika said.

Muhammad Giyasuddin, who lives near Moulali, took his wife to the Sacred Heart Church on May 29 after she suddenly developed breathing difficulties.

Giyasuddin was looking for a doctor to take his wife to when a neighbour told him about a “medical camp” at the church.

“I took her to the church. She was first provided with oxygen. A doctor then examined her and gave her some medicines,” said Giyasuddin, whose earnings have stopped since the Covid restrictions closed the shop at the Chandni Chowk market where he works.

Among the many oxygen recipients at the Gurdwara Behala was Sister A. Nirmala, a resident of New Alipore.

A doctor is stationed at each of the three camps, along with a couple of paramedics. Patients are sent back home once they become stable. If a patient remains critical, a team of volunteers scouts for a hospital bed. Poor patients receive free medicines at the camps.

“Many people who come are Covid-positive. Some have symptoms but have not been tested. We advise them immediate Covid tests,” said Arabinda Bera, the doctor at the camp at the Gurdwara Behala.

“Around 30 people visit the gurdwara oxygen camp every day. The number is around 30 at the Sola Ana Masjid too, and about 15 at the Sacred Heart Church, which is located in a non-residential area. So far, we have served some 1,500 families,” said Satnam Singh Ahluwalia, chairman of the IHA Foundation.

The camp at the Gurdwara Behala has an oxygen bank. Apart from treating patients, it refills oxygen cylinders and arranges for oxygen delivery at the doorstep of senior citizens. The other two centres have four oxygen concentrators each.