Focus on post-Covid options in education

In the new normal, post-pandemic, the street smart education system needs to integrate with the conventional system, Mitra said 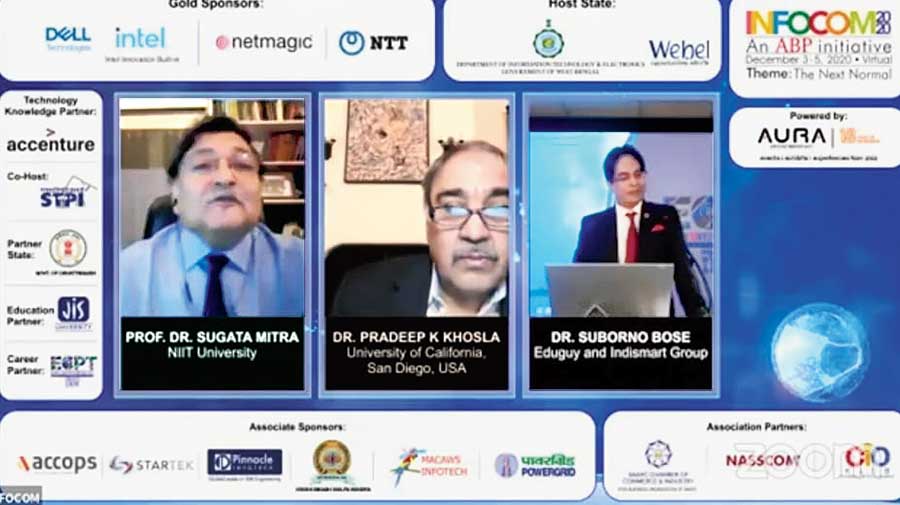 A parallel system of education exists along with the conventional school-college-university system, which Sugata Mitra, professor emeritus of NIIT University, calls the “street smart education system”.

In the new normal, post-pandemic, the street smart education system needs to integrate with the conventional system, Mitra said while talking in the final session of Day One of Infocom 2020, titled Power of Experiments in the Next Normal.

With Mitra were Pradeep K. Khosla, chancellor of the University of California, San Diego, and Suborno Bose, founder of Eduguy and founder and chief mentor of Indismart Group, who moderated the session.

“All of us went to school, college and university. That is the formal system of education. But there are people who have not gone through that education system or they might have dropped out of it. But they picked up a lot of stuff from the streets and taught themselves to be plumbers or electricians. A street smart electrician can do an entire rewiring of your house. So the street smart education system is an alternative education system that has been with us for a long time,” explained Mitra, who was professor of educational technology at Newcastle University.

Every nation has them and with the internet, the power of the street smart people becomes immense. Earlier, they might not have known certain things but today, with a smart phone in their hands and Net connectivity, they can easily find out and teach themselves.

“Living on a campus, students learn to experiment, they learn in groups. There is a biohacking lab on my campus, a physical lab. In the pandemic situation, no one is allowed in that lab. How to run a lab like that in this pandemic? How do I give the social experience of campus life? That experience has a lot of educational value,” Khosla said.

Mitra, the creator of the hole-in-the-wall experiment that showed unsupervised children could learn by themselves in self-organised learning environment, does not rule out the role of teachers. While he propounds that learners should not be taught what they can learn by themselves, he also believes that the teachers’ role is to formulate interesting questions to which children can seek answers with the help of a computer and internet.

Moderator Bose said in the post-Covid world, learning and the education system as a whole have undergone a change. He felt both the student and the teacher need to redefine their roles in the changed environment.

Khosla advises against getting rid of the physicality in the Zoom world. With huge university campuses in the best of locations, the chancellor stresses the need for the physical touch. “How do you do a chemistry experiment, how do you make something in the lab, we need an equivalent of that experience in the virtual world,” he said.