Fleet-footed in the hills: The Telegraph captures some standout moments

Speed, stamina, smiles and songs...all were on display at the annual marathon organised by Darjeeling police on Sunday 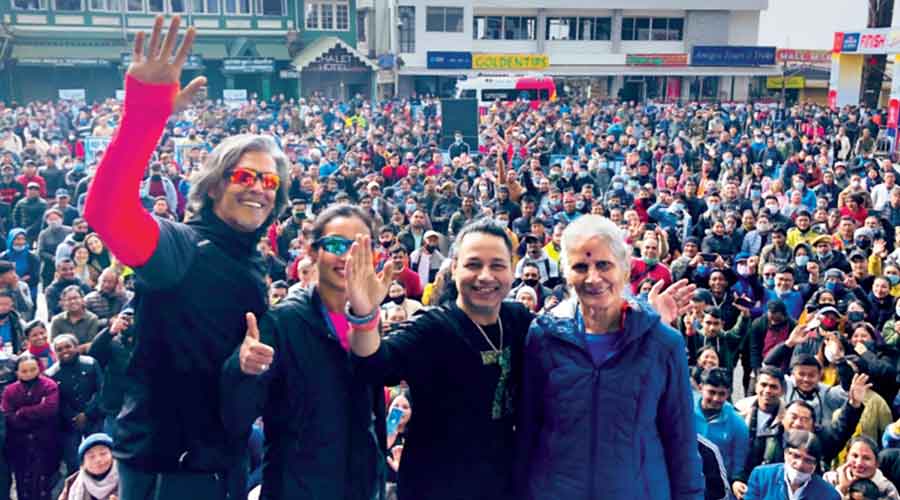 The cynosure at Sunday’s annual Darjeeling Hill Marathon was 81-year-old Usha Soman (right), actor and fitness promoter Milind Soman’s mother, who easily completed the 10km event. Usha was the oldest among the 2,000 participants at the marathon, organised by Darjeeling police in six categories. The picture above, tweeted by playback singer Kailash Kher, also shows Milind (left), his wife Ankita Konwar and Kher.
Sourced by The Telegraph
Vivek Chhetri   |   Darjeeling   |   Published 23.11.20, 03:07 AM

Milind Soman ran. Kailash Kher and his band Kailasa pulled the crowds. But the cynosure at Sunday’s annual Darjeeling Hill Marathon was an 81-year-old.

Usha Soman, Milind’s mother, wowed everyone by easily completing the 10km event on a route that professional athletes termed “difficult”.

“I do 10km runs pretty frequently. This run was very pleasant,” she told The Telegraph.

Usha was the oldest among the 2,000 participants at the marathon, organised by Darjeeling police in six categories. All the six — including the 21.1km event — began and ended at Chowrasta after circling Darjeeling town.

Tejasvi Rana, an IAS officer currently posted as the Kalimpong SDO, accompanied Usha in the run, but competing in the under-45 age category for women.

Usha has been a social media sensation since posting a video of her doing the plank, an exercise that involves holding a position similar to that for a push-up as long as one can, a couple of years ago.

A woman runner at the event

Asked on Sunday about her plank skills, she smiled and said: “More than running, I do plank. He (Milind) pushes me at it. I can do a two-minute plank.”

The event’s theme was “Time to R-UNLOCK”. While emphasising the importance of fitness to immunity, Milind asked people to “run to unlock”.

He later tweeted a picture of himself against the backdrop of the crowd with the hastag #newnormal and wrote: “Darjeeling today :) ran my first 21km since February with 2,000 runners.”

Nine-year-old Ryan Gelek, a student of the Darjeeling Montessori House of Children, and eight-year-old Prativa Pradhan from the Child Academy in Lodhama, 90km from Darjeeling town, both completed the 10km run.

Both put their success down to the lockdown which, while closing down normal activities like school and games, had left them with a lot of time to try something different.

Prativa said the lockdown had prompted her to take up running too — with her father at their village from “6am to 8am every day”.

The organisers arranged a “special felicitation” for the duo.

Milind told this newspaper that the “run was lovely, the weather was great with a lot of people to cheer, and it was beautifully organised”.

Businessman Narayan Goenka, who wants to shed flab and get fit, with his son Namish Goenka, 9, and niece Alivia Singhal, 11, at the run

Many professional runners were equally appreciative. “This is only my second run since the lockdown. The first was at my hometown Meerut. It feels great,” said Jyoti, a national-level runner who won the 10km in the under-45 category for women.

Ranjana Tamang, a 17-year-old from Gangtok who was the first-runner up in Jyoti’s category, said it was a “different” experience running a “real marathon” after months of doing virtual marathons during the lockdown.

Kailasa and Shrikant’s Surfira enthralled audiences at Chowrasta, starting from 8am — an hour after the runs started — and winding up around 12.30pm, about two hours after the last runner had returned.

Entire families turned out to participate — or just to watch and enjoy the concert — glad for the chance to have a day out at a time when pandemic-induced restrictions have stifled social life for most.

Milind’s family was out in force — with his wife Ankita Konwar too participating.

Narayan Goenka, 45, who said he weighed 112kg, ran with his son Namish, 9, daughter Devanshi, 14, and niece Alivia Singhal, 11. “This is the first time they are running,” Narayan said.

Dentists Rinchey Norbu and Sandy Tshering Rai were at Chowrasta, all masked up to cheer their husbands.

Masks were handed out to all the runners at the start but few wore them for any length of time during the event, perhaps fearing they could cause breathlessness while running.

Tejasvi Rana, an IAS officer who is now the SDO of Kalimpong, beams as she displays her “finishing medal” after completing her 10km run
Green effort

The plastic water bottles of the previous six editions had been replaced with paper cups in a nod to the environment. Some 100 volunteers carrying dokos (traditional bamboo baskets) ensured that the marathon did not leave the route littered.

Swapna Chatterjee, a visitor from Bangalore, was among the volunteers with the waste baskets.

Bangalore-based Swapna Chatterjee, in Darjeeling now on a visit, was among the 100 volunteers who kept the event pollution-free

“I’m visiting Darjeeling for the first time and volunteered for this initiative with my friends,” she said.

Utsow Pradhan, founder of Take It Easy, Easy Does It, which runs an eco-tourism project in Darjeeling, said no waste generated from the run would be sent to the landfill – it will all be recycled.

“We will also conduct a waste audit so that the findings can be of help in future events,” he said.

Romonus Guria, 52, from the Kolkata Runners club who came third in his category -- 10km for above-45 men -- said the event was tough.

“Although I managed a podium finish, the sudden climbs uphill and downhill made it a very tough run,” he said.

“This year I found the route really tough. Nevertheless, I’m happy that I won,” said Pun, who hails from Nepal but is posted with the Indian Army’s Gorkha Regiment.