Noise norms went for a toss at night 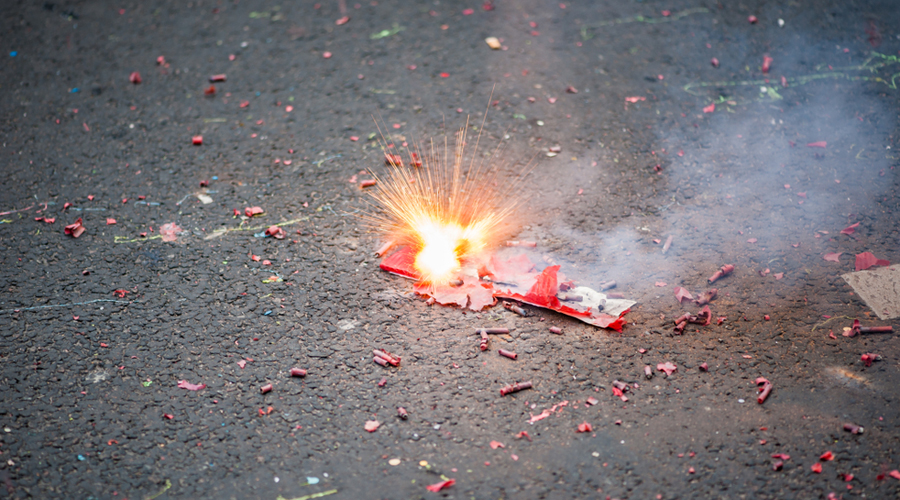 Calcutta High Court, before Diwali, had ordered a blanket ban on bursting of fireworks during the festive season.
Shutterstock
Jayanta Basu   |   Ballygunge   |   Published 02.01.21, 02:09 AM

Calcutta rang in 2021 with incessant bursting of firecrackers.

The noise pollution data of the Central Pollution Control Board confirms the noise spike post-midnight in most parts of the city.

According to the data, accessed by The Telegraph, the noise levels had shot up in eight out of the 10 monitoring stations between midnight and 1am, compared with the average noise level measured from 11am to midnight.

The spike reflects the extent of bursting of firecrackers post-midnight, after the city rang in the New Year.

The opposite happens under normal circumstances — the ambient noise level plummets as the night progresses.

According to experts, an increase of 10 dB leads to doubling of pressure on eardrums.

The maximum national permissible limit of ambient noise after 10pm is 55dB in commercial areas, 45dB in residential areas and 40dB in areas with hospitals.

A senior pollution control board official admitted to The Telegraph that there were violations for some time post-midnight but said the responsibility of enforcing noise rules lay with police.

“We wrote to all senior police officers about the norms and judicial pronouncements. What else can we do?” the official said.

The noise act and a Supreme Court order ban bursting of all fireworks after 10pm. Calcutta High Court, before Diwali, had ordered a blanket ban on bursting of fireworks during the festive season.

The order followed repeated warnings from doctors that pollution caused by fireworks would impact Covid patients and those who had recovered from the disease.

“We have received a number of complaints about bursting of fireworks and playing of high-pitch DJ music till late at night. As a matter of fact we had to lodge a complaint with Lalbazar as DJ music continued till late at night just behind the BC Roy hospital for children in Phoolbagan,” said Naba Dutta, the secretary of the environment platform Sabuj Mancha.

He alleged that both police and the state pollution control board officials were at fault. “While the main onus of controlling noise pollution is on the police, the board is required to play a much active role in controlling fireworks, microphones and the DJ menace. We had written to the PCB some time back urging them to take action to prevent such violations, but nothing happened on the ground,” Dutta said.

Biswajit Mukherjee, a former chief law officer of the PCB, said the board could have hit the roads on December 31 night along with the police.

Mukherjee pointed out that the state government’s decision to not impose night curfew on New Year’s Eve and chief secretary Alapan Bandyopadhyay’s recent observation that the situation was not conducive to imposing night curfew, might have emboldened the violators.

Dutta and Mukherjee both pointed out that the PCB should take up the issue with the police, especially because they have provided costly noise measuring machines to the police to enable them to catch noise violators.

A PCB official had earlier stated that the agency had given more than 1,000 such machines to various police stations, including in the Calcutta police area.

“I am looking into the allegations”, said Subhankar Sinha Sarkar, joint commissioner of police (headquarters).